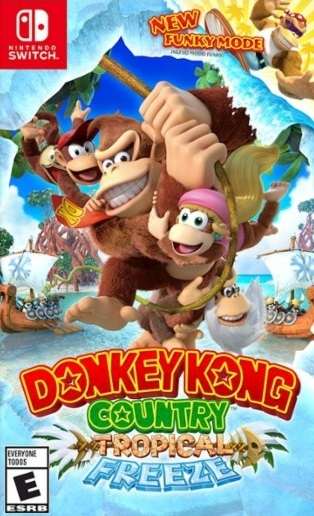 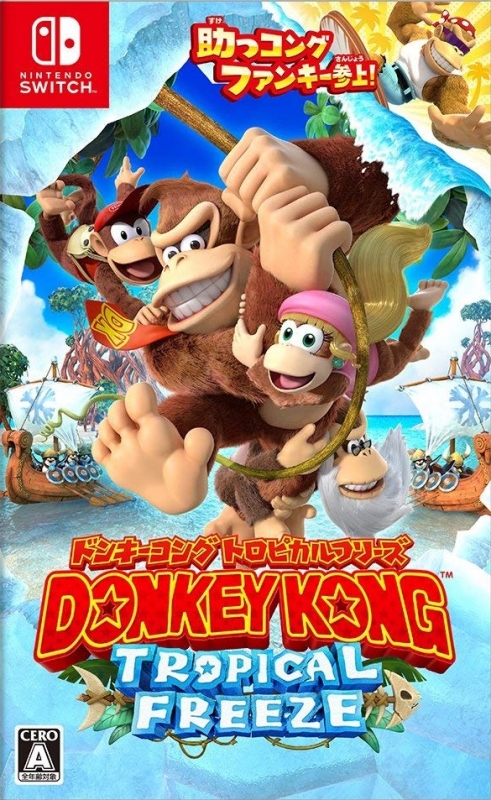 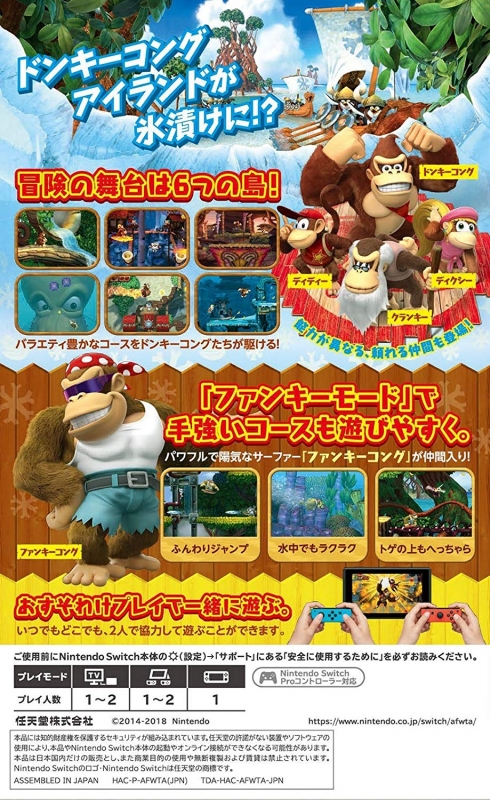 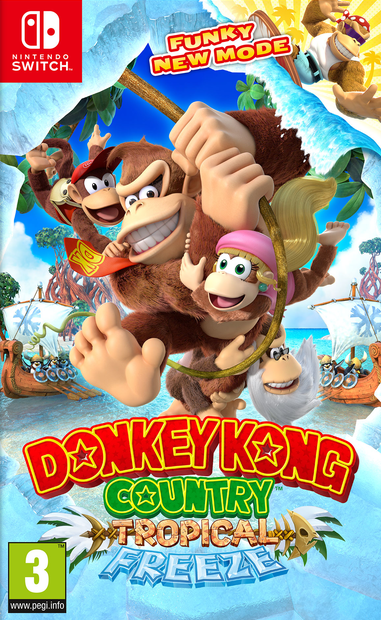 Donkey Kong Country's return on the Switch brings the introduction of Funky Kong, who can power through stages with an array of fun abilities.

It’s bigger, stronger, and faster too - it’s the newest member of the DK crew! Yes, Donkey Kong Country has returned once again, this time making its debut for the Nintendo Switch, in the form of a Tropical Freeze remake. Well, calling it “bigger” might be a bit of a stretch, as there's no real additional content here to speak of, but it is a strong port with some added bells and whistles - and it certainly runs faster too.

Not only does the game run at a consistently smoother 60 fps on the Switch rendition, but the once cumbersome load times have been essentially sliced in half, making for an all around more swift and streamlined experience. The simple act of booting up the game often took somewhere in the ballpark of 30 seconds to load on Wii U, while the Switch version achieves the same task in 10-12 in my experience. Loading most of the levels would often take up a frustrating 15 seconds on Wii U, while the Switch version usually clocks in at 8-10. 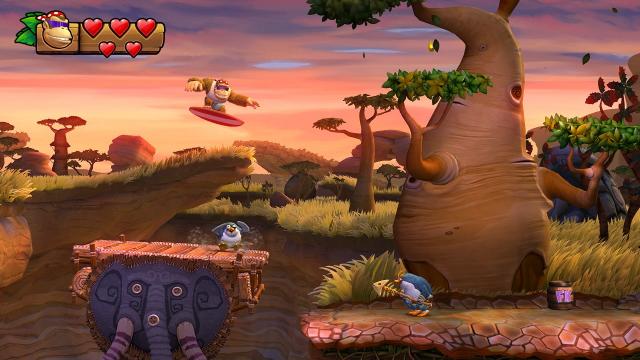 Of course, the game takes some strides graphically too, bumping up the 720p resolution to a more slick and vibrant 1080p when docked. Environmental textures are crisper and at least a touch more detailed, and the more fuzzy details like the Kongs’ fur are now cleaner and pop a tad more. Of course, the game still runs on the same engine under its slick new hood, so you’re still play around in the same blocky 2.5D cartoony environments with no actual polygonal enhancements. Regardless, they do take on a richer and glossier finish that’s easier on the eyes, allowing the charmingly colorful art style to flourish even more. Thus, any significant technological leap comes in the form of a crisper resolution, along with smoother framerates and faster loading times.

The main selling point of this game, however, comes in the form of the new “Funky Mode”, in which Retro injects its own clever twist on your typical easy mode. This is done by allowing you to play as a roided-up version of Donkey Kong by way of the radical, surfboard flying ape dude known as Funky Kong. Actually, Funky acts as a sort of combination between every other playable Kong: he can do a double jump like Dixie, and hover for a bit ala Diddy Kong. He even takes a page out of the Cranky Kong playbook, with his ability to absorb the damage of most spikes by using his surfboard to protect him, rather than Cranky’s method of bouncing maniacally on a cane. He also apparently takes on the genes of a fish, as he can swim faster and breathe underwater. 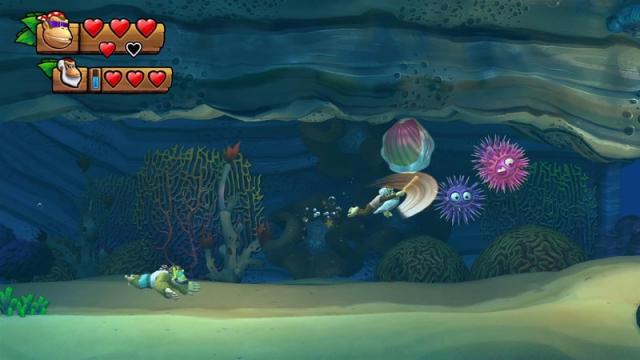 Overall, I had a good old time soaring and plowing through stages with Funky Kong. His array of skills, along with his increased health - a whopping 5 hearts - allowed me to kick back and just enjoy the environments, the level design, and the rich soundtrack even more. Couple this with a second player in local co-op, who’s given another 3 hearts, and there’s a far thicker buffer between you and a swift game over.

There were certainly fewer white-knuckle moments of intensity and fury in my experience, and I didn’t have to scramble for my life nearly as much. My twirling surfboard got me out of many hairy situations; between the imminent danger of the arctic viking creatures, pits, vines, spikes, and any combination thereof. Even the frequent minecart stages grant you one additional heart, bringing the total to three. Obviously this doesn’t prevent you from instantly biting the dust by plummeting down a pit, though the extra hit often goes a long way when it comes to hazards. 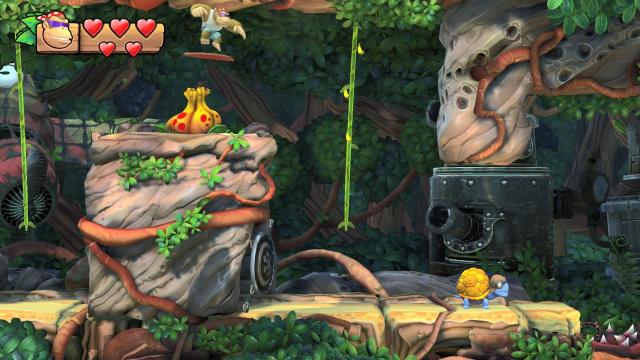 Of course, you could make the argument that the game becomes a touch too simplistic and easy going, and I won’t completely disagree. However, with all the hazards and pits flung your way, Funky feels more like a necessary counterbalance to the chaos than a handicap or an “easy mode”. You’ll accumulate more lives and survive longer, to be sure, but the game still isn’t a cake-walk. This is especially true in the later stages and during those stubborn moments where you’re compelled to snag each puzzle piece.

As an interesting side note - you can sort of “split the difference” in difficulty by playing as Donkey Kong in Funky Mode. This allows you to dial back some of the cheapness of Funky’s overpowered nature, while still tossing you an extra heart as Donkey Kong. This proved to be closer to my sweet spot in terms of difficulty, anyway. You can swap out your characters easily in the options menu, so if you’ve grown tired of Donkey and want to return to the wacky fun of Funky, you can revert back to him with no sweat. 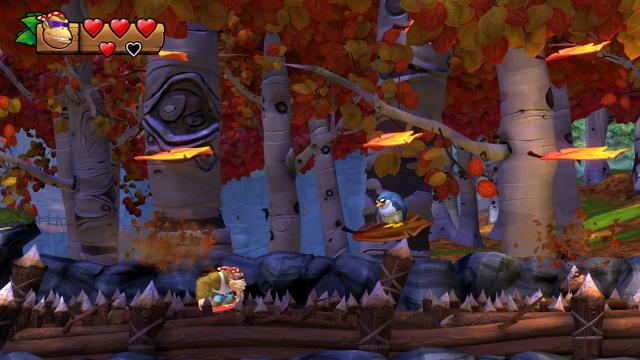 The joycons also feel great, despite the lack of a d-pad which usually lends itself best to 2D platforming. The HD rumble is a subtle, but a nice and fitting touch, with all the barrel blasts, ground pounding, and the like. The face buttons and joystick actually feel decent, and you can even add motion functionality for rolling and ground pounding Wii-style, which makes the controls feel less convoluted. Playing each joycon separately ala co-op mode can prove a touch finicky and requires a little time to adjust, though it works well enough. 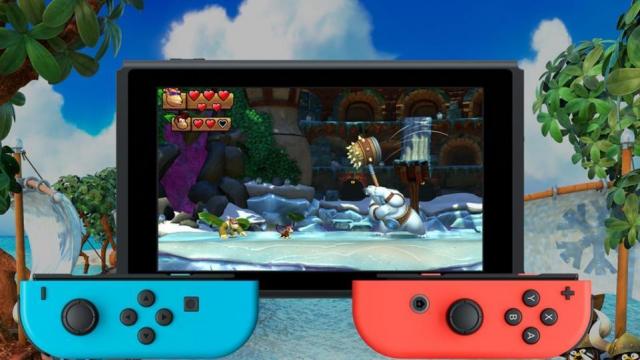 As Funky Mode is primarily what separates Tropic Freeze Switch from its Wii U counterpart, the question then becomes, does this zany new feature make this a worthwhile purchase? Well, that depends on the circumstances...

If you’ve already played through the Wii U version, you may want to give this a pass, especially if you still own the game. Of course, there is the boost in its technological and graphical prowess, along with the somewhat new feel provided by playing as Funky. You’ve also got the added value of having a true portable version of Tropical Freeze that both plays and looks solid, especially compared to the 3DS version of DKC Returns. But unless you’re a true die hard fan, or you’re a frequent train, bus, or plane commuter, I simply cannot justify a $60 price tag. If anything, wait for that price to follow in the footsteps of the game’s load times, which is to say slashed in half. 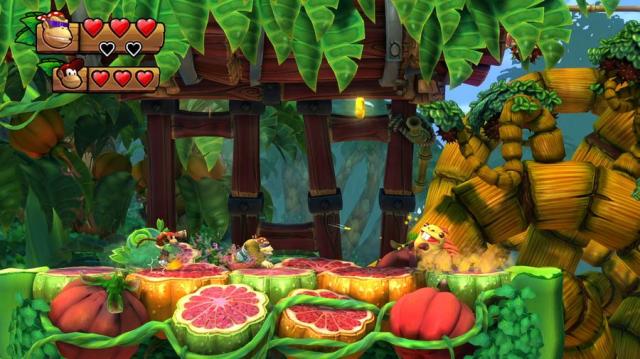 Still, if you’re one of the many gamers who missed out on the Wii U and want to delve into this enjoyable and charming platformer for the first time, it’s definitely worth giving a go. It’s certainly the definitive Donkey Kong Country game as far as Retro's series goes. But it also might just be one of Nintendo’s strongest co-op platformers. Now, if we can only get a remastered version of Donkey Kong 64...

This review is based on a copy of Donkey Kong Country: Tropical Freeze for the NS