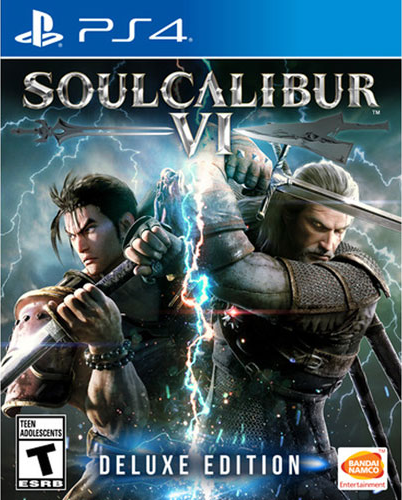 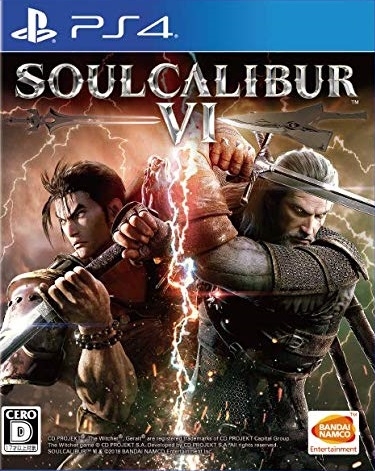 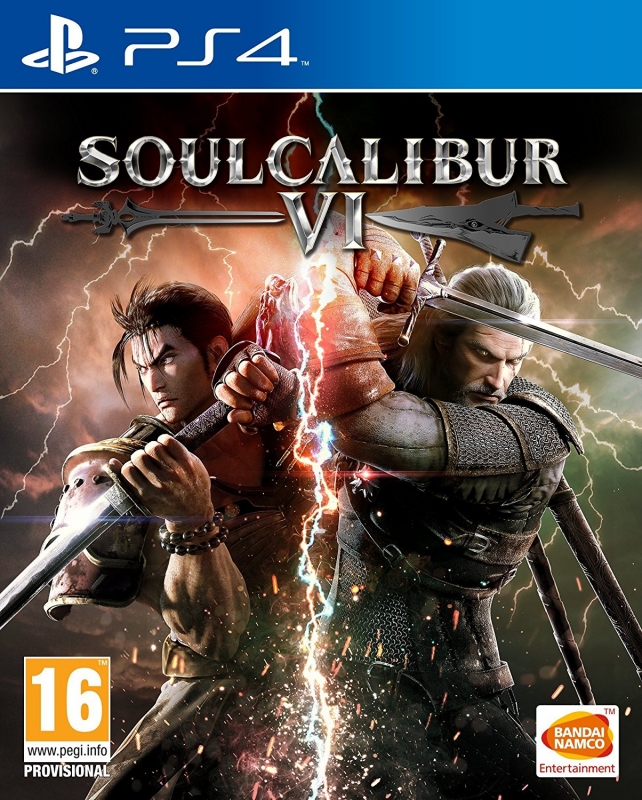 Hits the nostalgia chords.
A legendary fighting game franchise which pioneered weapons-based 3D fighters and popularized guest appearances in games, the Soul series, which originally began with Soul Edge back in 1995 (thereby technically making SoulCalibur VI the seventh game in the franchise), has been in a bit of an awkward situation the last few years.
The previous main release for the franchise, SoulCalibur V, put the series on hiatus since its release in 2012 due to the mixed reception it received, something that was largely earned because of story elements eliminating several fan favorite characters and their replacements not really gelling, as well as many aspects of the game coming off as unfinished, with later interviews confirming that the original scope of the story was much larger than what eventually made it into the game. 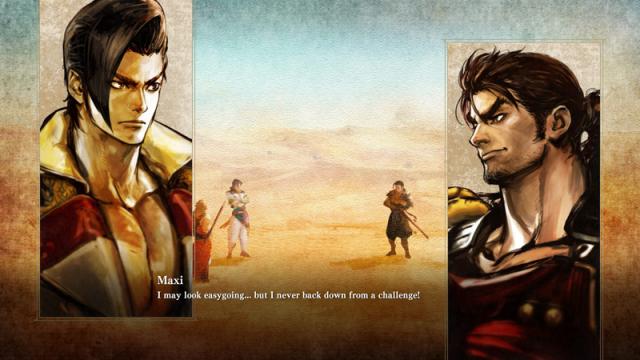 Because of these woes, SoulCalibur VI takes a step back and refocuses on what made the series so popular in the first place, with many of the old fan favorites back in action. It also sets the story as something of a retelling of the early games of the series, mainly spanning from the events of Soul Edge up until SoulCalibur III. All in all, the game features 20 characters (not counting boss character Inferno) at launch, with one DLC character currently available and at least three more promised to come.
In this endeavor, many classic characters have received makeovers and their stories, while maintaining many of the same beats from previous titles, have gotten some slight changes here and there. The game has a lot of story content, which is mainly told through voiced dialogue between gorgeous artwork of the characters, rather than actual cutscenes. There's a story mode where each character has his or her own story path called Soul Chronicle, as well as a general story mode, and you can clearly see the timelines for each overlap, making it easy to digest how everything fits together chronologically, which makes it great even for newcomers to follow what's going on. 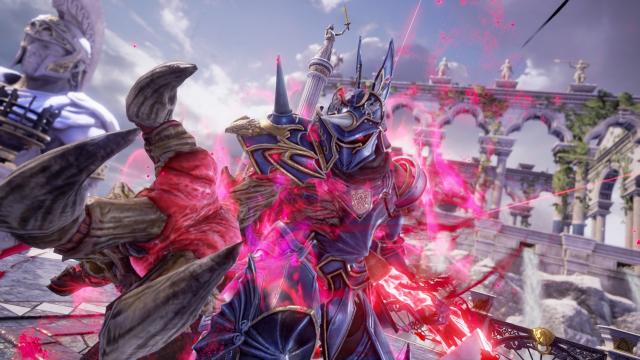 Guest characters, which have become a staple of the series since SoulCalibur II introduced The Legend of Zelda's Link, Tekken's Heihachi, and Image Comics' best-selling comic book character Spawn for the GameCube, PlayStation 2 and Xbox versions, respectively, are also present. Geralt of Rivera from The Witcher joins the game, and fights quite differently from most other characters, bringing a bunch of signature magic moves with him. Besides this, it has also been confirmed that the game's second DLC character will be another guest, this time 2B from Nier: Automata.
Besides this, the create-a-character mode returns much like in previous titles, and in this game you can choose from different races besides human, opting to make elves, orcs, skeletons, and more. While these other types have less customizable parts than human characters do, it's still a nice touch that lets you build the medieval-fantasy aspect of the series even further. While the customization may seem a tad barebone at first, through the use of patterns and placing of certain trinkets, it's possible to modify characters much more than you might initially expect - you can find plenty of videos online showing how deep this system goes and how you can really create anything.
Another aspect of the create-a-character mode is that you can use it to make alternate costumes for existing characters, so if you like the characters the way they are but want to add extra flair to them, that's possible as well. There's also a second story mode which follows your own created character on an adventure parallel to the main story, where you encounter many of the iconic characters of the series. This mode is called Libra of Soul and sheds more light on the overall narrative of the game. 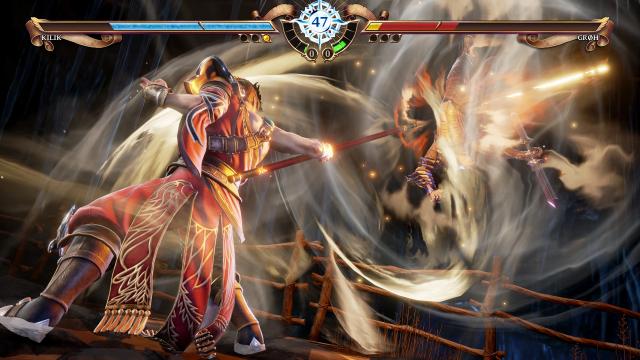 The gameplay feels familiar, but with an air of freshness, for anyone who's played the series before, and characters are as usual very distinct in how they play, meaning you can experience a ton of variety. As is typical for the series, it's heavily focused on reading your opponent's movements and responding accordingly. While combos definitely exist, it's not a very combo-heavy fighter, opting instead to encourage players to use mechanics such as Just Guard to parry your opponent's attack and leave them open for retaliation, or to keep your opponent at bay with the range your weapon gives you. Another nice aspect of SoulCalibur, which is retained in this title, is if you happen to like the playstyle of a character but not their personality or appearance, you can simply make a character to your own liking and add that weapon to them.
If that's not enough single player content for you, there's also an arcade mode where you can test your skills in a more traditional fighting game setting, battling through opponent after opponent to achieve a high score (or rather, a fast clear time). 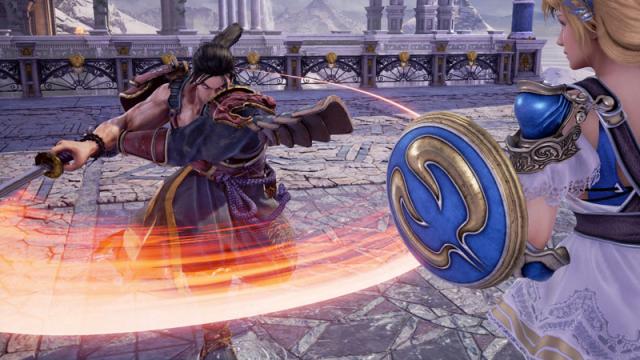 The main aspect of modern fighting games, though, is multiplayer. As a competitive endeavor, SoulCalibur VI feels good, and it's fun to play against friends or more seriously, thanks to there being a lot of depth to characters and their interactions. As with previous titles in the series, stage selection also plays a part since you can be launched outside of the stage and instantly lose the round from a ring out. While stages aren't too different from eachother and don't always affect matches that much, the different shapes, as well as how many walls they have as opposed to pits you can send your opponent down, make familiarizing yourself with them a key part of strategy, especially if your character excels in this area.
Online is always difficult to get to work well in fighting games simply because of the precise nature and fast pace of them, and while I'm personally of the opinion that fighting games and online will never work well enough for it to feel satisfying, SoulCalibur VI does a very good job in that area, and I had several matches that didn't feel bad at all, even with opponents located a few countries away from me. If you're used to playing fighting games online, SoulCalibur VI will probably feel great to you, since Bandai Namco traditionally does very well in that area, and this game is no exception. 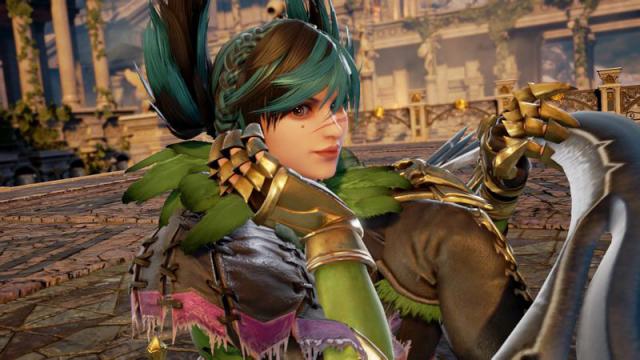 Graphically, it's a stellar game with very handsome and beautiful characters all around (except maybe Voldo, unless you're into that...), as well as expansive vistas that stretch as far as the eye can see while you're doing battle against your foe. It's definitely a very pretty game, although it isn't the graphical trailblazer its predecessor SoulCalibur was on the original DreamCast.

The game's music will feel familiar to anyone who's played a title before, with epic battle music being played at every turn, showcasing the extravagant and fantastical nature of the historical fighter, while weapons clashing against eachother give off feedback in both video and audio. In short, it's hard to be disappointed in the presentation area of the game. 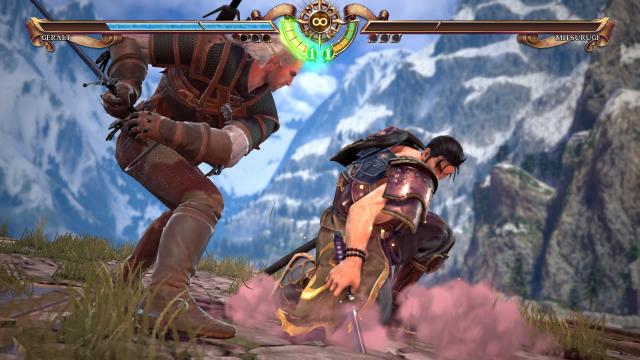 Although it's a very stellar game, there are a few drawbacks as well. If you're looking for a fighting game to play, unless SoulCalibur's historical approach and weapons-based system heavily appeals to you, there are plenty of other games out right now with much larger character rosters.

Another factor that can be frustrating for more serious players is that Create-A-Soul characters may have slightly different properties than the characters they're based on, meaning that your combos or reach might not work accurately compared to who they're based on, which is difficult to adjust to on the fly, and not always visually apparent. Since these characters are fully playable in Ranked mode online, it can be an enervating endeavor when you run into one and aren't entirely sure if your matchup knowledge will apply properly or not.
Overall, SoulCalibur VI is a fresh game which also hits the nostalgia chords very well, and with promised post-release support in the form of at least two more characters after SoulCalibur III's fan favorite jester Tira and the aforementioned guest character 2B, there's going to be new content to enjoy for quite a while. If you were ever a fan of the series, or are simply interested in playing a beautiful fighter with plenty of weapon variety, this is a solid game to pick up.