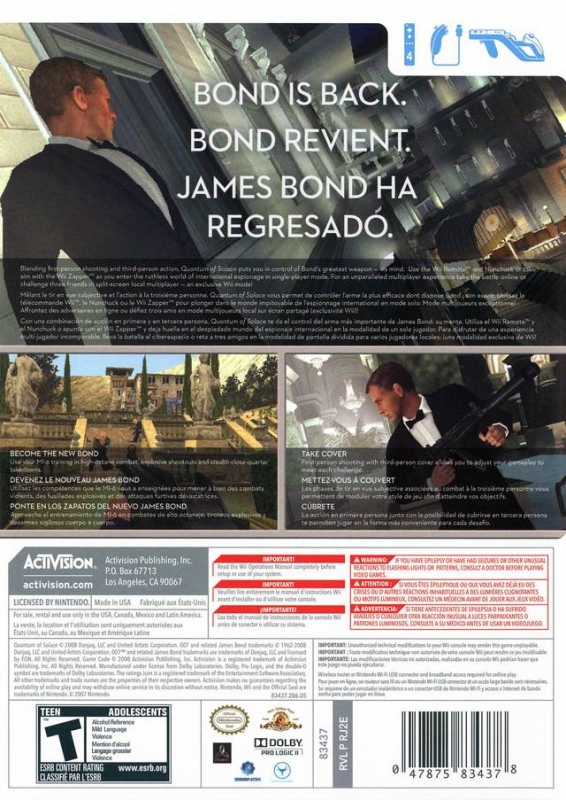 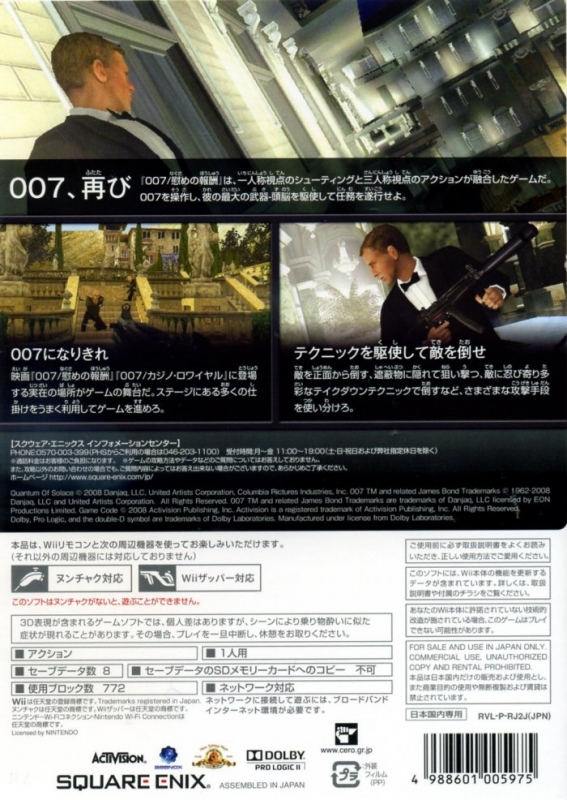 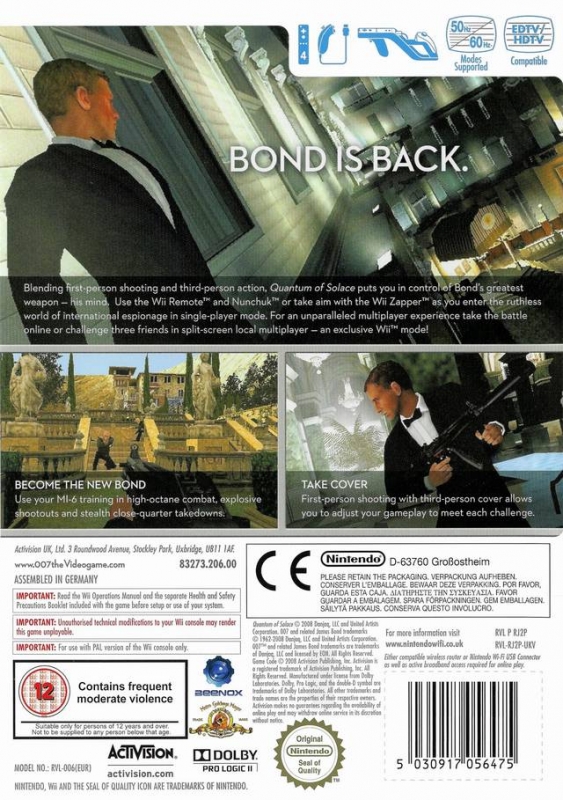 Does the newest Bond game take the fan favorite crown from Goldeneye?

Like many on here, I have fond memories of Rare’s James Bond 007: Goldeneye for the Nintendo 64. Not only were the single player modes well executed and tailored for replayability, but the multiplayer death match modes were something of a godsend in the days of lackluster console first person shooters. I remember, vividly, heading over to one of my friend's houses with a case of Mountain Dew and a pillow for an all nighter with Goldeneye. I would pick Baron Samadhi, as I always did, and have a blast. Unfortunately after Goldeneye, the Bond franchise has been stuck in catch-up mode for the past near decade, trying to replicate what made Goldeneye so great. There have been a few good games, and a few terrible ones, but none have come close to the enormous shadow that Rare created. With Activision’s newest Foray into the franchise, Quantum of Solace, I was hoping that it would at least come close.

I chose Quantum of Solace for the Wii for a few reasons, because I generally like the Wiimote for FPSs, and it is the only version of the game with local multiplayer. I don’t know about anyone else, but I am starving for a good 4 player FPS like Timesplitters, Goldeneye, or Perfect Dark on the N64, that allows three of my friends and I too shoot each other up, in the comfort of my own living room. Before Quantum of Solace the ONLY game with these credentials was Red Steel, and although the multiplayer was passable, the few levels, and limited functionality made it somewhat of a novelty, and not really anything that I’d want to play a whole lot.

Quantum of Solace contains six multiplayer maps, all which have distinct play styles and strategies, for example the shanty-town from the beginning of the Casino Royale movie is there, and is a great level for snipers. In a stark contrast, a level like the casino is better for machine guns or shotguns. Another nice little perk is a level based on Goldeneye’s own facility level, for those wanting a retro feel. Aside form this local multiplayer; Quantum of Solace contains an online mode, and a single player story mode with varying difficulties. The online, and local multiplayer for that matter, is further broken down into more modes: Conflict (the standard deathmatch mode), Rush (Instead of just killing each other you are given objectives), Team Conflict and Team Rush (both are just 2 on 2 team versions of the first two).

The Wii version supports a control scheme similar to the one found in Call of Duty: World at War, aside from a different button setup. These controls were smooth, really responsive, and were easy to grasp for a beginner. You can even chose to play the game using the Wii Zapper, an almost standard for Wii shooters at the moment, and these controls were not bad, but lacked some of the finesse that Medal of Honor Heroes 2 had. Personally I liked the Wiimote + Nunchuk control setup the best.

Within the game itself, it is obvious that this game is not your typical FPS. Not only is there a heavy stealth emphasis over Rambo-like gunning, but there is also a cover and wall hugging system very similar to the one found in Gears of War. The cover system is very rewarding, as you can take cover, and blindly shoot at an enemy, or lean out by tilting the Wiimote, for a precise shot. As with any game with this cover system, there are a few problems. Sometimes when I wanted to hug a wall, or take cover I would end up having to move a bit for it to register, or accidentally pass my destination. This is not a huge complaint however, as these exact same issues were prevalent in game like Gears of War.

The graphics in Quantum of Solace are a mixed bag unfortunately. In some levels, like the very first one, everything from the blades of grass, to the bricks that make up the buildings are very well done, and look above average for most Wii games. Then the game sandbags you with a level like the opera house, where the water effects are similar to those found in Goldeneye 64. This inconsistency points to my assumption that multiple groups of people worked on different levels, and cut and pasted it together to form one cohesive game.

The game generally looks good but there are other problems. In the levels where the game looked really good, the game had a tendency to drop its frames per second count to a stall for a few seconds the moment anything got too crazy graphically. For instance in the very same awesome looking first level, the mansion you are in begins to explode at one point. This is one of the many times when you see destructible environments in the game, which are nice to see in a Wii game. When the happens, the game went from a steady 30 fps to something like 10 fps every time a timber fell or explosion occurred. This in no way made the game unplayable, but in those levels where this occurred, it could get somewhat annoying.

This general sloppiness rears its ugly head a few more times, when the cinema scenes (which are rendered in game for the most part) seem to mess up every once in a while. In one Bond’s arm phases through a metal pipe and in another the scene stalls halfway through for no reason. This once again was not a game breaker, but made the game look kind of shoddy at some points, and further pointed to my assumption that it was slapped together kind of quickly without much continuity.

The music in Quantum of Solace is very good from the opening theme to the online modes. I actually liked the video game's theme song better than the one from Alicia Keys and Jack White from the actual movie. The rest of the game features some cool variations on the original Bond theme and some level specific music given to exotic locations. This game music, although essentially the same theme over and over, never felt annoying or overused.

For me, after I finished the one player campaign, the meat and potatoes of the game was the awesome online mode. As I mentioned above, there was Conflict, Team Conflict, Rush, and Team Rush modes. The game uses friend codes, but has a random matchmaking system similar to the one found in Call of Duty or Mario Kart. Even months after the game came out, there are still plenty of people online, and you hardly have to wait at all for a game to start. In the online, there are NO lag problems and NO dips in the frames per second, unlike the game itself. This helps make the online experience really fast paced and very fun. This is also furthered by the excellent level design, that makes the levels not too huge, but big enough to not feel cramped. In this case I felt that the online mode was the superior mode in the game, and is well worth picking this game up, or at least renting it.

In both online and local multiplayer, you can chose from eight player classes: four from the “good guys”, and four from the “bad guys”. These are essentially opposites of each other like the “00 agent” class versus the “mastermind” class, but all weapons are different and stats are changed. I especially loved playing as the evil marksman character, because his breach loading sniper rifle, although slow, would get me one-hit kills. Unfortunately these classes are not customizable, but seem balanced as it is.

I had a lot of fun with Rush mode, as it was a different experience altogether than your typical online shooter. A normal game of Rush mode involves a set of tasks, for instance if “assassinate player 3” pops up on the screen you need to rush over to find the third player, and take them down before anyone else does. This has a time limit, and first one to get it gets a few points. After that you could be assembling the golden gun, intercepting a satellite feed, escaping with a briefcase, or any number of small tasks to get points.

Quantum of Solace is hard to place a value on. In one hand, if you are looking for a good Wii shooter that has local multiplayer and online, this game is a definite buy, and will keep you busy for many hours. On the other hand, if the multiplayer does not interest you at all, the single player is somewhat buggy, incredibly short at just under ten hours, and more-or-less mediocre. It would be hard to recommend it for the person with the latter situation. Personally I would say that this game with its ten hour single player, local multiplayer, and online is a nice game for any Wii owner to have for parties where people may want to play a FPS.

Although Quantum of Solace seems to be the best Bond game since Goldeneye, it still does not live up to it’s older brother’s shadow. All the facets of a great game are there, but they are presented in such a way that it is kind of soured for the player. On one hand you have a great online and local multiplayer experience, which resembles the fun of Goldeneye, and even wants to be like Goldeneye with levels like “the facility”. On the other you have a sloppy one player game, with hit or miss graphics, and a few technical issues. I would definitely say that you should give this game a chance, as it may be worth your while.