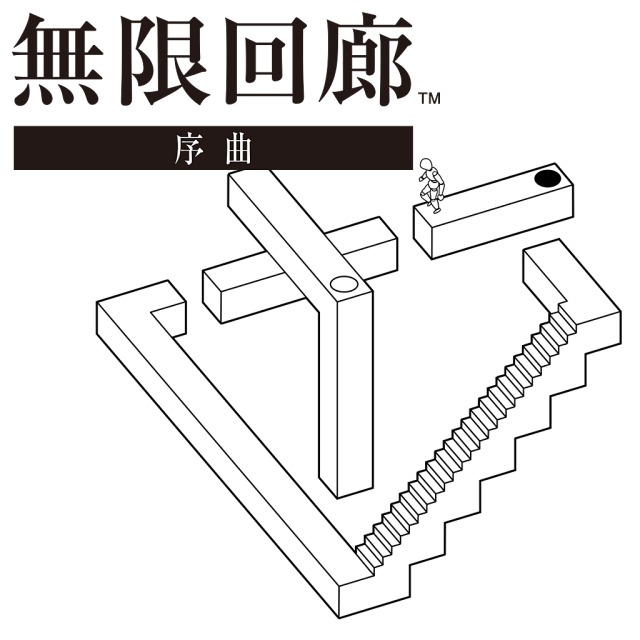 Echochrome is a game created by Sony’s Japan studio for the PS3 through the PSN and on UMD on the PSP. The game itself is based off the idea of perception. The goal of any given level is to guide your character (a white stick figure-like being that kind of looks like models artists use to draw human proportions correctly) to gather, for lack of a better word, several echoes of himself that are located in various places around the puzzle. The character himself simply walks forward, turning left whenever possible, and you use the left and right analog sticks to change the angle of the map and use the special rules of the Echochrome world to guide the little guy to his echoes.

When you first start Echochrome you go through a demo that gets you acquainted with the different rules of the Echochrome world. The first rule is called “Perspective Traveling”, through which you are able to connect two paths by changing the perspective so that it looks like the paths are connected. This is the most common method you will use to get from one platform to another throughout the game, and can be slightly touchy since you have to get the perspective just right for the two paths to become connected. This issue is helped out by pressing the square button, which will connect two paths for you if you are already close to connecting them.

The second rule is “Perspective Landing”. This rule states that when falling through a hole, the character will land on whatever appears to be below it. So by changing the perspective, you can use a hole in the ground to guide your character to any platform you can make appear under the hole. This also is pretty much directly related to the fifth rule, “Perspective Jump”. The maps will often have white circles on the paths that will fling your character into the air whenever you walk over them. The fifth rule allows your character to jump up to any platform that appears to be above him.

The third rule is “Perspective Existence”, which states that if you can change the perspective so that two paths appear connected due to something blocking your view of a gap in the path, then your character can walk along the path as though there was no gap. This goes right along with the fourth rule, “Perspective Absence”. This rule is basically the same as the third rule, except that you are now blocking the view of some obstacle in your path. By using this fourth rule, you can walk past holes in the platform, or jumping pads that might have impeded you.

These are the rules the game provides you with, but for simplicities sake you only truly need to remember three things: You can connect paths with perspective, you will land on anything that appears under the character whether it be after falling through a hole or jumping on a pad, and anything that isn’t in plane view doesn’t exist. Remember those three things and you’ll get through the game fine. Some other tips are that you can hold X to make your character run, press triangle to make your character stop and think, and hold R1 to move the perspective faster.

Once you are to the main menu, the game has three different basic modes. The first mode is a free play kind of option in which you will be given random maps to work your way through, with the option of skipping any given map in favor of another randomly selected map. As you complete each map, the next map given to you will be from a higher difficulty level, until you either get tired of it and quit or you run out of time. (ok I’m not sure about this one, but I swear I just ran out of time once and the game went back to the main menu, even though there is no visible clock and I couldn’t really tell you how much time you actually get) The second mode allows you to choose which specific map you want to play, and after finishing the puzzle the map will display your time, and allow you to view a replay of you solving it. Beyond the maps included in the game, you are also able to play your own inventions, which you create using the third mode of play. The last option on the main menu takes you to several options through which you can change the settings on the game, watch the tutorial again, or see the game’s credits.


Alright, now that we’ve explained the basics of the game, let’s move on to the reviewing.

The gameplay is basically how I’ve explained it above. There is very little more to this title than that. The game does allow you to download some online maps created by other people, but these are only available as random maps during the first mode of play, and you can’t actually just choose to play one of them. My major disappointment with the gameplay is that it does not give you any kind of incentive to complete the puzzles other than the joy of playing through them. What I mean by this is that there is no story, no real campaign mode, and no reward for beating a certain number or difficulty of map. (at least that I’ve been able to find) All in all this game came across more as an extended tech demo than an actual fully functional game. This does have one upside though, if you enjoy the demo you will more than likely enjoy this game. The demo is a perfect sampling of the game, just don’t expect to get anything more than the demo provides, other than more maps and the ability to create maps. If you’ve played the demo and these additions sound like just what the doctor ordered, then please by all means buy the game, you won’t be disappointed.


The game’s presentation is incredibly simple in all respects. On the technical side there were no discernible bugs in the game and the only issue I ever had in that department was with paths that I thought should be connectible, but no matter how I moved the perspective around or how many times I pressed the square button, they just never connected for me. The menus, on the other hand, do have a glaring problem. You may have noticed that during the explanation of the game’s modes, I called them by their appearance and didn’t use their actual names from the game. This is because the developers saw fit to name these all confusing words without giving any definition of what each mode meant. The modes are called “freeform”, “atelier” and “canvas”. I truly hate the use of a word like “atelier”, because I contend that the average gamer doesn’t know what the hell that word means. I “wikied” it and apparently it’s the name of an artist’s studio, but wouldn’t just calling the mode “maps” or “level chooser” been so much simpler? I’m all for artsy names for menus, if you define them at some point, otherwise you might as well just call the modes 1, 2, and 3 for as much good as their given names will afford me.

On the visual side the game is extremely simple, everything is in black and white. This works well for the game, but it also means that there is nothing within the visuals that will wow you or give a self-proclaimed “graphic whore” an HD stiffy, so the graphics work well, but aren’t fantastic by any means.

The audio presentation follows in the footsteps of the visual, with very simplistic sound effects for landing and falling, and a creepy echoing voice that tells you when you’ve succeeded. The music is all very soothing classical music that I did not recognize. Again the audio serves its purpose and does not get in the way of the gameplay in any shape or form, but does nothing to make one remember the audio. Also I would’ve enjoyed some choice in music, since the constant unknown soothing classical music does start to make me feel like I’m in an elevator instead of playing a game for fun.

The value depends on how much the gameplay clicks for you. If you really enjoy making and playing through the maps, then you’ll get an incredible amount of time out of your ten dollars, but with no goals to achieve, and no ability to choose to play shared maps created by others, there are still ways in which they could have improved the game and allowed for more gameplay for your buck.

Overall, I was disappointed with this game. It seemed like a great mechanic, but instead of incorporating this game mechanic into a fully functional game, Echochrome is just the mechanic presented by itself in as simple a fashion as possible. I feel like there was a lot more they could have done with this game, which is why in the end, I felt I could only give it a B- overall. Were it without any faults other than the untapped potential, this game would probably warrant a B, but the confusing menus as well as the missing options that could have easily been put in such as choosing to play a user-created map, bumps this game down to a B- for me.