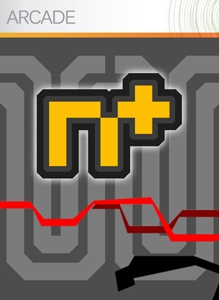 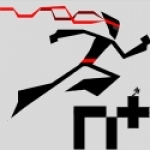 Platforming bliss, all wrapped up in an 800 MS points package.

N+ is a relatively simplistic puzzle-platformer, available from the XBLA for 800 MS points (with sister versions also available on the DS, PSP and PC). For 800 MS points you get 275 levels in the main single player, as well as a complete level editor (see screenshot below) and fully fleshed out co-operative and competitive multiplayer campaigns, although you may find it hard to find a game unless you have a specific person to play with. On top of that there are 3 downloadable level packs. The first two packs are 200 MS points, and include a total of 200 new levels each. The third pack is free, and includes a total of 250 new levels, 150 of which are single player maps (effectively meaning N+ has 425 single player levels).

In N+ you control the little ninja in the screenshots and your goal is to flip a switch to open an escape door. You then work your way towards the door and enter it in order to end the level. All the while the yellow bar at the top of the screen is rapidly dwindling, so you have to complete the level before you run out of time. Fortunately you can pick up gold pieces scattered throughout the level in order to replenish the timer.

In order to complete your task you have a limited number of moves available to you, all of which consist of running and jumping. In that way it’s a very pure platformer, all you do is run and jump your way through the level towards the exit, but it’s that simplicity which makes the game extremely enjoyable and highly addictive, like so many of these neo-retro arcade games. It’s the introduction of threatening elements (like mines, rockets or electrocuting robots) and your ever evolving ability to run and jump that increases the difficulty over time and keeps the experience fresh and addictive. Whilst the jumps are easy to make early on, later in the game you’ll need some pretty good jumping skills in order to make them – for example, try wall jumping up this when you first play:

Success later on in the game relies heavily on your ability not only to execute your jumping moves perfectly but also on being able to use the map to your advantage, and making full use of the game’s physics. Take that level in the screenshot above. The key to getting to the top of that room (where the switch is) is using your ability to jump from the ground to the wall, and then carrying your momentum as you push back off the wall and float upwards diagonally, you then turn back towards the wall whilst attempting to maintain your speed, and rinse and repeat all the way to the top. It’s a tricky move to pull off, particularly with all those mines in the way, and you have to do it several times in a row.

Most of the levels are relatively short and easy, taking only a couple of minutes to complete (some can even take as little as 5 or 10 seconds to complete). A large number of the levels look deceptively easy when you first load them up, but can end up consuming hours of your life and result in hundreds of ninja deaths. Like the very best arcade titles N+ has a simple gameplay mechanic, which you gradually perfect your use of over time, and introduces ever more challenging levels for you to complete.

However, the difficulty curve is a little too unforgiving at times. Like so many retro platformers, N+ can get fiendishly hard. Sometimes it becomes too hard and many of the more difficult levels turn into a trial and error grind, such that you'll find yourself exploding a few too many times. The way in which you progress through the game both compounds and relieves this problem. You progress through the game by completing ‘episodes’ (see screenshot below). At the start of the game you can access 1/5 of all the episodes, but the remaining episodes are all locked. Each episode consists of 5 levels, all of which must be completed in one sitting before you can move on to the next episode.

What I like about that system is that it gives you a little leeway at the start of the game to pick and choose which episode you want to complete and allows you to choose the difficulty level that suits you best (the episodes go from easy to hard, so you could start off with the hardest levels if you so choose). Unfortunately whilst this system combines a structured gameplay path for players with a little bit of flexibility, it’s also far too rigid and unforgiving.

However, I also have 2 issues with that system. Firstly, you cannot save the game after each level. You have to complete all 5 levels within an episode before the game saves for you. For the harder episodes this is far too difficult because each level in itself is very time consuming and hard, so come the 3rd or 4th level you’ll probably find yourself having spent a good hour or two on the game and will want to turn it off, but if you did you would lose all your progress. Secondly, it blocks off a whole raft of episodes and levels. I take my hat off to users that have completed the game, but most of us will probably never beat the harder episodes, so we miss out on a lot of the levels available in the game. These two issues are, I feel, the only major drawbacks to the game. They make it excessively hard at times, and it tends to detract from what is otherwise a superbly fast paced and easily accessible game.

Graphically the game is pretty standard for an XBLA game. The colour palette mixes dull greys and black and contrasts this nicely against the bright yellow timer and the gold pieces scattered throughout each level. The graphics are pretty plain and simplistic but that minimalism is in keeping with neo-retro style of the game.

The main focus is clearly on the gameplay but N+ still manages to look pretty slick and stylish for an XBLA game. The rag doll physics are great, for example, land on a mine and your ninja gets blown to bits and his remains are flung all over the place. The feeling of movement and momentum is well realised too, so stringing together a series of perfect jumping moves and building up your speed makes the gameplay even more satisfying.

The sound effects are good, particularly the ones you trigger when you explode on a mine, smack against the ground from a great height, or get electrocuted by one of the beeping robots. And the soundtrack is excellent because it has a memorable up-beat electric sound that fits perfectly with the fast paced gameplay.

Finally, for achievement hunters there are the standard 200 GS up for grabs, most of which are distributed for completing the single player and multiplayer campaigns. Like I said above, most people won’t be able to complete this game (and I put myself in this category), so getting the full 200/200 GS should provide a substantial challenge.

N+ is a great game - currently my second favourite XBLA title after Portal: Still Alive. It has really addictive, fast-paced and simplistic core gameplay, which truly showcases what the XBLA is best at. The sheer amount of levels (425 single player levels as standard when you factor in the free DLC, a bunch of multi-player levels and plenty of extra DLC levels available to buy), online multi-player and the easily accessible level editor combine to make N+ great value for money at 800 MS points.

As with all XBLA games there is a trial, so if you’re interested in N+ I highly recommend you check it out.