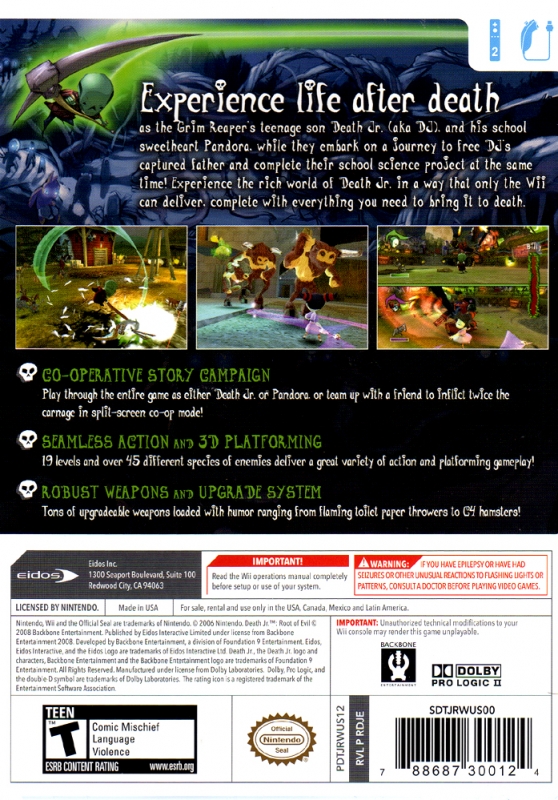 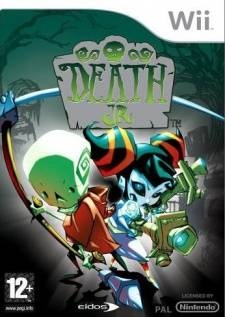 Find out why Death Junior is quite a cool guy in this review!

There are not many games that improve in quality in the later parts of their playtime: Zelda: Twilight Princess was often considered to be a bit of a let-down during the second half of the game, as well as Metal Gear Solid 4 and I won’t even talk about the hundreds of games that re-use levels (or parts of them) to provide a healthier playtime; even Halo did it. Usually, we’re pleased with our jewels when their second half matches the first one in terms of value but there is hardly ever a game that starts off as a real bomb and improves so heavily over the course of the story that you completely change your mind about it. Death Jr. Root of Evil, even though it is a port of a PSP game and as such doesn't take advantage of the Wii´s graphical capabilities, is such a game and it remains a secret as to whether some of the reviewers who rated the game poorly stopped playing it after just a few hours or not. I’d definitely rate the game a D if I had stopped playing early on – what luck I didn’t because it turned out to be a very enjoyable platformer.

You play through the game as DJ (Death Junior) who coincidentally is the son of Death who, at one day, takes a little break from coming for all those sorry souls to have some burgers for lunch in a mall. Just after he ordered some food a giant monster enters the scene killing all people in sight. Reading his timetable, Mr. Death learns that these people shouldn’t die and tries to stop the killing. Unfortunately, that doesn’t work out the way it should and our beloved friend is being kept in what looks like a… uh, cocoon?

Surprisingly (no, really!) it was DJ himself who freed said monster in an attempt to actually do his homework for biology class. You see? Such things never work out well… (Stop doing your homework and play some games!)

The gameplay feels a little awkward at first and to be honest it’s the first third of the game that really made me want to put my controller away and play something different. While everything starts off well enough to make you expect a decent game, the motivation dies off as soon as you enter some of the “collect 5…” levels and then some “collect 3…” levels just right afterwards. Introducing its different moves one after another, the game feels very monotonous during the first hours – but exactly at the point I really just wanted to quit and rate the game a D it suddenly started to take off. Not out of the blue or something but I noticed a steady improvement in each chapter of the game and the last third was so awesome that I wished it would go on for hours and hours.

You control DJ -- or his (girl-)friend Pandora -- with the analogue stick. A button makes you jump and B or B + analogue stick makes you use combos. New combos can be unlocked by collecting glowing energy balls that spill your way all throughout the game. Your nunchuk buttons activate one of the many guns in the game (which are collectible) and you can point at the screen via the Wii remote to shoot. The game feels a bit like a hack-and-slash at some point when all you need is some button-mashing to beat the dozens of crazy enemies that try to knock you out. And there are quite a lot of them: Laser chickens, robots, policemen, animal-like creatures and more. The boss fights, while rare to see, are very entertaining as well -- whether it's a huge doll shooting her laser at you or an oversized action robot that even shouts out some typical merchandize sentences or giant plant monster, the boss fights are well done.

The whole game can be played in co-op mode for two players as well, which works just as well. If you play together the game is a tad easier of course but it definitely improves the motivation if you like this kind of social gaming. (Ask your girlfriend to play with you and you’ll have a nice time.)

The cut scenes are well drawn, nothing overwhelming but definitely worth a look and the humorous part of the game never comes up short. With its funny characters, crazy storyline and some “your mother” jokes the game always somewhat delivers even though some people will find the humour too childish.

Voice acting is here, too and it’s not too shabby. Some voice actors fit their characters really well. The environments, while not awe-inspiring, are all well drawn and fun. You’ll visit a soft toy graveyard (which reminds one of Stephen King), a shopping mall and the land of waffles, ruled by its king… Louie. Louie the Lama. Oh well...

In the end the game feels a bit like a Saturday morning cartoon and while the story is not the greatest it is always fun to watch the cut scenes and listen to the characters crazy ideas.

On to the technical side: The graphics (brought to you in widescreen mode) are nice and overall they are well worth a C but they don’t look outstanding either. Expect textures and character models that have been directly taken from the PSP version of the game. Sound is the same story: Nice and entertaining at some points but rather boring at times. This is a bit of a mixed bag because the actual gameplay is really good.

The game is a bit short, unfortunately, which is even sadder when you consider the huge amount of fun it is to play through the last levels of the game but collecting more weapon-pieces and playing through the game with Pandora after you’ve finished it once adds a bit to the replay value (the chapters won’t change when you use Pandora, though.) All in all you shouldn’t expect to get more than 12 hours of gameplay out of the game, though. Still, I can recommend it if you like Platformer and not-too-serious action games and are a somewhat humorous person.

All in all I have to admit that I am impressed by how much the game improved over time – while not without flaws this is definitely worth a purchase or a rent. Unfortunately, the first parts of the game and the lackluster graphics and sound make it impossible for me to rate this game very high. On the other hand, if you like platformers and if you are patient enough to play through the first third of the game without getting too bored to go on you should definitely give this game a chance.