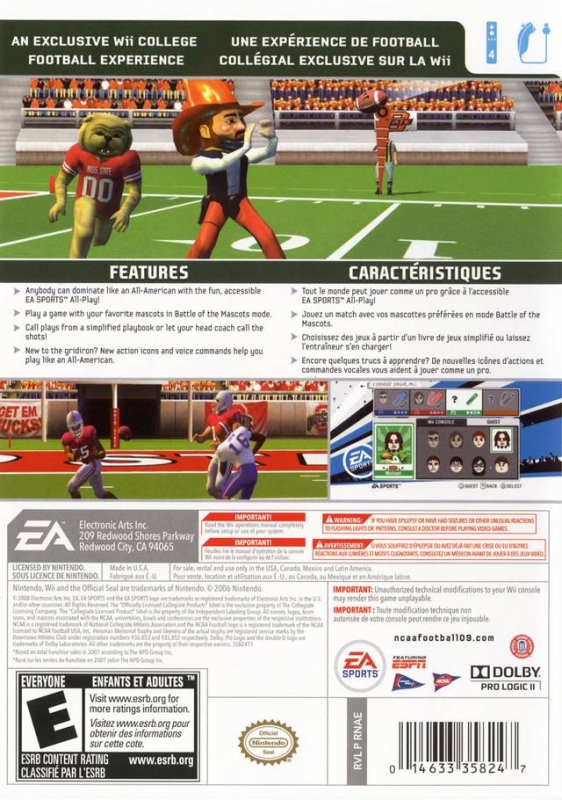 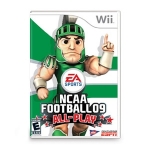 EA's flagship college football franchise stumbles on its way back to a Nintendo console.

I was ecstatic when EA announced they would be bringing their NCAA Football franchise back to Nintendo consoles. For those unaware, after the 2005 update, EA pulled the plug on any subsequent future releases on the GameCube, which meant GameCube only owners like myself would either be forced to buy a new system to quench our college football gaming thirsts, or hope that one day the series would again be announced for our platform. Finally, it was announced that the premier college football video game series would be getting its fresh start on the Wii with the 09 addition of the franchise, and three years of waiting would seemingly be nearing its end. But unfortunately, I can say without a doubt that NCAA Football 09 All-Play is not what Nintendo-only fans of NCAA Football have been waiting for, simply because of the inclusion of that final word - All-Play. Because “All-Play” is included in the title, what is presented here is essentially a football experience that doesn’t appeal to “everyone” like the title suggests, but an experience that only elementary school aged kids may find appealing. If you were hoping for any sort of realism in the Wii edition of this year’s game, then let it be known - this isn’t your game.

Let me make sure it’s clear that I have nothing against the route that EA decided to take with this game, and trying to create an entertaining sports title for all types of gamers (both newcomers and veterans) through the added All-Play subtitle is not only a cool idea, but an idea that matches the very premise of the Wii console itself. And in all actuality, not everything offered in All-Play is poorly executed. Controls are actually implemented pretty smoothly (although that is to be expected by now), and if you’ve played any Wii-Madden titles before, then you’ll feel right at home here. Flicking the Wii Remote and nunchuk for stiff arms and jukes (in that order) while running works as fluidly as it has for the last few years on previous Madden titles. Passing is responsive, and depending on the force you put behind the flick of the of the Wii Remote, your QB will deliver either a lob pass, bullet pass, or perhaps something a little in between in your receivers direction. On the defensive side, tapping the C button will execute a dive and the Big Hit feature is mapped to the remote as well. And although kicking with the Remote and Big Hits were a little off at times, I am sure that in the 2010 iteration these issues will have been addressed, especially after getting the series' rookie game on the platform out of the way.

Also packed in the game (and where the All-Play premise most likely derived from in the first place) are added gameplay settings that help ease first time Wii users into the game. When All-Play mode is switched on, only the Wii Remote will be required and manoeuvres such as evading tacklers, Big Hits, pitching on the Option, and even more, are all handled exclusively with a flick of the remote. Also present is a nice feature below your player that lets you know when to perform these actions, and as beginners continue to progress they can add the nunchuk to take control of player movement that is otherwise A.I. controlled. Other nice bonuses with the All-Play feature are subtle changes in gameplay to decrease any sort of level of intimidation: any play-clocks are eliminated, quarter length is defaulted to three minutes and A.I. difficultly is decreased. And thankfully, if you’re a seasoned veteran playing your novice friend, he can play with All-Play settings enabled while you play with them switched off. The up to four player standard in football titles is also supported in All-Play. If only the rest of the game was as thought out as the All-Play gameplay settings are, because from here on, it all goes downhill - and fast.

The first thing you will notice if you’ve played any of the previous NCAA Football titles is a completely jarring lack of game modes. Where is the standard Campus Legend mode that appeared in last-gen versions of the franchise? Where’s Create a Team/Player, two modes that have been staples of the series for years? Where is my ability to pump up the crowd during home games, an addition that has been in every NCAA title since 2005? Why can’t I edit weather effects for games with even the fraction of options displayed in previous iterations? And forget Historical Teams, or even online play for that matter; they’re nowhere to be found in the game. Having a complete disregard for features and content that have been prevalent in every game for years, even on last-gen systems, is completely inexcusable. This is where the first true issue with the All-Play subtitle comes into play, as it was advertised that both newcomers and veterans to the series could enjoy the title, but how can the latter do so if expected features are completely ignored? And it has to be assumed that even beginners will become experienced players and will want these modes as well, because without them, what is presented is almost a demo-like experience compared to other versions of 09, and as expressed before, even previous years as well.

Modes that are included are pretty standard, and aren’t without their share of disappointments as well. Curiously enough, Mascot Mode is advertised as the premier mode in All-Play, but it’s a feature that’s been included in older titles, and plays exactly the same as it did previously just with added Wii controls. The season simulator Dynasty Mode also returns, but it’s a shame that it too plays almost exactly as it did before. Your standard Play Now and Practice options are also encompassed in-game, but unfortunately, yet again, what used to be an expected yearly feature has been axed, in this case the accomplishments/pennant system that used to give an increased incentive for players to keep returning to Play Now over and over again. As a matter of fact, the only added “feature” besides the aforementioned All-Play settings is a celebration feature that increases momentum for the team that has just scored. To implement it, just flail the Wii Remote and nunchuk in the air like a madman while the game shows off both cheerleaders and players going crazy in the midst of celebration, and boom, momentum increased. This gets redundant after about the first time and I just don’t see how this would appeal to any Wii user (old or new) unless they’re around the age of six. Any updates added to the Wii version of Madden 09 are also absent; this is as cut and dry as you can possibly ask for.

As if to match the horrendously low amount of gameplay modes, visuals in the title are some of the worst I have seen in a console sports game for years. It doesn’t matter that 480p and widescreen support is included, textures are nearly non-existent. The game comes off looking like something in between an arcade and a realistic football title, which doesn’t match the sense of realism that has worked so well for the series thus far. Player faces look downright horrible, the logos on helmets and uniforms look as if they were lazily drawn on with Microsoft Paint, and once again it seems as if another aspect of the game is actually worse than it was in last-gen counterparts. To add to the more “arcade-like” feel, ball trail effects were added to every pass, turbo trails to every time a player presses the turbo button, and visible flashes of energy were added for tackles, all of which aren’t necessary and can thankfully be turned off. Last time I checked, just because somebody is new to games, doesn’t mean that they deserve terrible visuals, and veterans of the franchise will be completely turned off by the colossal graphical downgrade.

Sound in All-Play is somehow just as bad as well, with fight songs playing at the wrong times, crowd chants and fight songs abruptly stopping during instances, and with a presumed player yelling through the Wii Remote speaker at completely inappropriate instances, coming off just downright annoying. He is supposed to give you hints in heated moments of gameplay, such as yelling at you to call timeout if very little time is remaining. But these instances always seem to come during kick returns, with him shouting “Call timeout!” or “Running the same play!”, both of which make zero sense in that situation. With all of these drawbacks, you would think that the supplied commentary would be just as poor, but other than the fact it’s almost all recycled dialogue from previous titles, it’s all actually mixed up rather nicely with correct comments coming from the announcers at the correct times - probably the one and only arguably decent aspect in this area of the game. Other annoyances that plague All-Play’s presentation range from movement with the nunchuk control stick in both playbooks and menus that often gets stuck, (for some reason the Control Pad is unaffected) and a longing for a better way to pick and choose plays. In its current format, players can see their opponent's chosen play during multiplayer matches. A return to an NCAA Football 2004 approach to play selection (where a cursor was not displayed over a chosen play) would really help.

NCAA Football 09 All-Play is a big letdown and one of the worst sports games I have ever played. And although some good things are accomplished here with the All-Play settings, the disadvantages that All-Play brings with it completely outweigh any advantages. As stated before, the All-Play premise is great, but it can’t and won’t work if modes are taken out and realism is thrown out the window. It would be great to see EA take another stab at this, and as evidenced by the much superior Madden 09 All-Play, they can make the 2010 addition seem like a completely different game. But until then, it should go without saying that the Wii version of 09 should be ignored, with both 360 and PS3 versions superior in every regard. If you happen to be a Wii-only gamer looking to scratch that football itch, check out the this year’s Madden that this review has referenced several times, as much, much more is offered there. It’s just too bad, that once again, there isn’t the choice of a decent college football game this year for gamers who possess only Nintendo consoles.