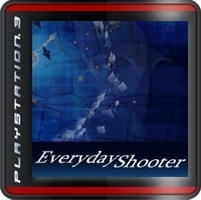 A rather interesting attempt to recreate the shooter genre; does it achieve its goal or is it merely what its title suggests?

Riff: Everyday Shooter is a downloadable arcade shooter developed by Jonathan Mak of Quesy Games, available over the PSN for the PS3, PSP and PC. Everyday Shooter puts you in control of a small ship, manoeuvred through the use of both analogue sticks, with the simple objective to survive the duration of the level as you are presented with increasing amounts of enemies. All sounds very basic, yes? Well, you’d be forgiven for thinking so after this most simplistic of introductions, but you’d be very, very wrong; Everyday Shooter is anything but what its namesake would suggest.

Everyday Shooter places your little ship in an obscure and entirely musical setting that constitutes a stage or level. Thus, each level becomes more like a 'song' that must be played through, with each enemy you destroy providing a different note to the musical concoction. What this does is creates a level that reacts to your actions - colours change based on movement and you have a fundamental role in how the level or ‘song’ plays out. The songs are composed mainly of guitar riffs and notes, with the enemies releasing their own riffs and notes when destroyed. The songs are generally rather simple and enjoyable, and most importantly, they fit well with the imaginative art style.

Now, this does come across as a bit more creative and inventive that it actually is; the song that each level plays is predetermined, and while you can affect how it sounds, the core of the song itself remains unchanged regardless of your actions, you're simply adding decorative notes on top. Although not as impressive as it first sounds, it’s impossible to ignore when playing how much the presentation really adds to the overall gaming experience.  Everyday Shooter has a very basic art style, it utilizes simple shapes and block colours and it’s this simplicity that allows the player to concentrate on the game itself, personally I enjoyed the style used but I would say it’s a highly subjective point. Technically it’s hard to fault. It runs smoothly, looks great and - an area where other arcade shooters often fail - it doesn’t suffer from a feeling of confusion when the screen is flooded with enemies because your ship is a simple white dot, so it’s quite easy to distinguish yourself from your enemies.

Each stage is also radically different from its predecessor, with a different song, different enemies and unique chaining systems. For example, the chaining system in stage one occurs when a certain object is hit and explodes into a steadily depleting wave. The longevity of the wave can be increased by firing into it, but most importantly the wave kills any enemies or enemy fire that come into contact with it, transforming them into another wave proportional to the size of the enemy/bullet. If timed correctly, these waves can be used to wipe out every enemy on screen. This drastically increases the rewards dropped by your enemies, in the form of small, white gem-like objects. These points are more important outside of the actual gameplay, as will be explained later, but accumulating enough will reward you with an extra life, imperative during the later stages. As said, this chaining system is drastically different on each level, and when combined with the varying song and art style on show, you’re never left with the feeling that the game is becoming stagnant or repetitive despite the simple nature of the gameplay.

I’m sure by now you’re salivating at the mouth at the earlier mention of rewards outside of the actual gameplay, and it’s definitely true that points equals prizes. The points you’ve collected can be used for a variety of different things, from increasing your starting life count, to unlocking single levels you may have particularly enjoyed and even changing the overall art style of the game (such as giving the levels a 'sketched' look, or a simple black and white colour scheme). For me, the most important reward for your hard work is the ability to unlock single levels.

If there’s one major complaint I have it's that the game is quite hard. Wait, no, it’s very hard. It’s frustrating because everyone should be able to experience and enjoy each level, rather than perceiving it as a chore (as I ended up doing). In the end however, you have 8 beautiful levels to play through, each with their own challenges and attractions, but unfortunately, that’s all you do get. This is not a long game, and while unlockables unquestionably add a bit of extra appeal, you can easily get through the core stages, and by easily I am in no way commenting on the aforementioned difficulty level, in around an hour. This is because there is no real score limit that must be reached, as mentioned each level lasts the amount of time the song that plays in the background lasts, which I’ve found to be around 5 minutes. Of course you have to actually survive for those 5 minutes, which is another task completely.

The true charm of this game lies in its simplicity, it can easily be picked up down the line (and I have done this many times) when you’re craving a more alternative gaming experience. Ultimately, Everyday Shooter takes your basic 2d shooter, and transforms it into a vibrant and colourful musical world, which, despite its problems, truly creates a unique and immersive world to play through, and while the gameplay maybe missing a little bit of Mak’s innovative touch, that certainly doesn’t take much away from an otherwise impressive game.