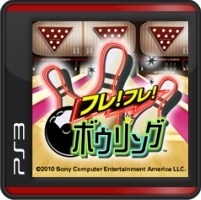 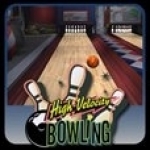 Bowling is a great sport. The need to figure out how to make the ball move by adjusting your body's movement is a great way to learn about how ones body can bend and flex. High Velocity Bowling is one of the better games that pull this sport into the video game realm. Using Sony's SixAxis motion controller, the game attempts to portray Bowling in a similar fashion to Nintendo's Wii Sports Bowling game. While High Velocity Bowling might not completely match Wii Sport's controls, it still offers a very good representation of how a game based around this sport should be.

The control scheme is very intuitive. When you start your match you get a quick tutorial on how things work. Pressing L3 allows you to view the grease on the alley. Using the SixAxis's motion control tilting the controller left and right, like a joystick, you can position your starting point at the line. Aiming the angle of your shot is done through the same tilting mechanism. Starting your shot you discover the only major issue with this game. The way you wrap your hand around the controller from the backside so that your pinky finger is on L2 and pointer finger is one the R2. This is really uncomfortable but it does allow for a firm grip around so you don't chuck your controller through your TV screen. The L2 and R2 buttons control the spin of the ball. Mattering how extreme your selected angle is, the harder you will have to depress one of the two triggers. Spin and how hard you throw the ball is done all in one step. As you reach back to thrust your ball out of your character's hand you have to remember to keep the amount of spin needed going till after the ball leaves your character's hand on screen.

Content is a major player in this game. The game has received 14 pieces of add-on content and updates that have added online play. Each of the original characters, and a few add-on characters, have their own set of challenges to beat in order to unlock in-game patches, bowling balls, and that character themselves to use. Multi-player is offline or online which allows you to bowl 1v1 against opponents across the world. There is a leader board so you can track online your progress as you improve your game. There are a few trophies which revolve around online performance so the better you become the more trophies will be unlocked. There is also an in-game reward system with which you can earn patches that symbolize what you have accomplished in the game. Patches can be awarded for managing to knockdown both pins in a 7-10 split or just bowling a perfect game. With the amount of patches there are in this game, it would take a few weeks of constant gameplay to win them all.

Considering this is a bowling game, the gameplay is quite self explanatory. You select your placement followed by angle then use the SixAxis's motion control to throw the ball while hitting your desired spin. This was pretty much summed up in the control paragraph so no real detail needed. No need for the previous sentence. How accurately does this portray real bowling though? Pretty accurately considering the finickiness of the control scheme. Within the single player mode you will find the trickier gameplay modes. Trick-shot places you on alley ways with obstacles between you and your targets (the pins), forcing you to figure how to properly throw the ball in order to knock down as many pins as you can. Other than that there is the traditional straight bowling. Try to get your score as close to 300 as you can. There are tournaments in which you have to get the best score out of a series of games but there isn't anything that changes the gameplay.

The visual aspects of the game are pretty much based on how accurate everything is presented, and each character's model and personal bowling alleys. For the simplistic visuals of the game, bowling balls are perfectly round, bowling pins are perfectly shaped, and everything shines like professional bowling balls, lanes, and pins should. While all is good on the simplistics it is the finer details, or lack of, that make the visuals only good at best. In some of the bowling alleys there are some carpets or grass that extra space here are lacking in depth. Of course you are not really supposed to be checking out what is around the pins but you want to see some detail when you do look around the lanes. Most of the objects have relatively low quality textures. In one of the early character alleys there are boxes that line the sides. At first glance you would swear you have seen them in a PS2 game a decade ago. The lanes have higher quality than everything around them though. While the textures are kind of poor, they fit together nicely and there are some objects that look good.

What type of music would you expect in a bowling alley? Well obviously little light tunes. Of course not elevator style tunes but tunes that are a bit more popping or jazzy to make you feel like you are at a real bowling alley. Not happy with the music though? This game supports in-game music so just select a song from the XMB and listen away. Music isn't the only thing that fits well into the game. All of the sound effects from the ball rolling down the lane to the foul buzzer if you step over the line before releasing the ball fit well. Everything is in place to make it as close to a realistic experience as possible. The only thing that deviates from the traditional idea of bowling is that characters themselves. There are a few that fit perfectly but then you have characters that are just weird like a farmer that can be purchased off the PlayStation Store who if he doesn't knock all pins down could start hooting and hollering some bleeped out but very foul language. Still a lot of character lines are hilarious for the most part. Only down side is that each character only has about three to five lines for earning a spare, strike, knocking down some pins, and getting a gutter ball so be prepared to hear the same lines quite often.

This game is a great experience overall that anyone can simply pick-up and play. It is a great party game but can easily be enjoyed by oneself. There is a massive amount of downloadable content available and hours of enjoyment to be had playing both single-player and online multi-player. There are a few hitches with comfort holding the controller, poor textures, and some repetitive character lines but nothing that severely hurts the game. High Velocity Bowling is a great game that anyone having a few bucks sitting around should pick up.