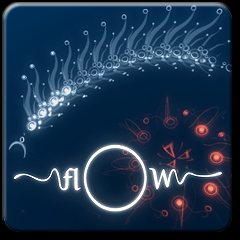 "not a bad relaxing game type, something for the kids really" Skeeuk

Flow is a title for the PSN created by thatgamecompany and released in 2007. The concept of the game is extremely simple and could be likened to a more complex form of the game Snake. You control one of several different small aquatic creatures, eating to increase your size while trying to avoid enemies. There is no penalty for circling around on yourself like there is in Snake, however.

Controls for the game are extremely simple, you use the six-axis to direct your creature around a two dimensional plane and press any button on the controller to activate the creature’s sole survival mechanism, which ranges from boosts of speed to turning green and paralyzing any enemy you touch. These different mechanisms, and the different ways in which each creature grows as you eat, help to keep the game fresh enough that you’ll want to try every controllable organism available, but also make for a fairly simplistic game that can get repetitive over time.

The goal when playing as any creature is to make it through all of the “levels” and reach the end to gain access to the next playable creature. Each level consists of a two dimensional plane which will have some small helpless food and usually some enemies to look out for as well. Your goal is to direct the mouth of your creature to food in order to increase its size and health points, while making sure that no enemies are able to eat your weak points which are clearly visible as bright blue orbs. You also kill enemies by eating their weak points, after which they will disassemble into smaller creatures which you can eat at your leisure. If all of your weak points are eaten, you are given one weak point and directed to the previous level to regroup. Enemies don't respawn on already beaten levels, so you can use the last level to eat some food and gain back more health and increase the number of weak points an enemy would have to eat to defeat you.

Once you are ready to move to the next level, you can eat the red creature floating around to go deeper into the water to the next level, or the blue creature to climb back up to previous levels. After you make it through all of the levels for any playable organism you are given access to a new one and put into a menu of sorts where you pick and choose which creature’s levels you want to play through. After playing through five creatures like this you have beaten the game and play through the credits eating bugs that appear on the names of people who helped to create the game.

Visually Flow is very simplistic, but also beautiful in that simplicity. It isn’t technically impressive, but creates a relaxing visual that goes along with the simplistic controls and slow gameplay. As you feed your creature it will grow larger and more complex and can look extremely beautiful and grand once you max. out its size. When going to deeper levels the background slowly darkens from the lighter colors of water near the surface to the deep black of the depths of the ocean. Both of these visual touches help to bring the organic feel of the game to life. The presentation does its job well, but is not truly exceptional enough to be at the top of the library, even when only considering PSN titles. The audio presentation mirrors the visuals in its simplicity and soothing qualities. The music complements the gameplay well, but isn’t memorable enough to be truly exceptional. Sound effects follow this trend as well, with everything working together very well.

Gameplay in Flow is average as far as PSN titles go. It is addicting enough to get you to play through all of the available creatures, but its simplicity and the sometimes difficult to use six-axis controls hold it back from being truly fantastic. Were the game not as short as it is, I could definitely see myself getting tired of the simplistic gameplay. There are also some frustrating moments that come from having next to nothing about the game explained to you and the confusion that can bring. It is an interesting experience, but these issues damn it to mediocrity.

The worst aspect of Flow is its value. My first playthrough of all of the available creatures clocked in at just barely 2 hours. This is incredibly short, even for a PSN title, but is augmented by the game only being eight dollars on release. There is some replay value inherent in the relaxing gameplay and lack of a story to get tired of, but there are no new unlockables to be had for replaying levels for creatures you have already beaten, so replay value is minimal as well. There is local multiplayer available, but no online, and the multiplayer only entails playing through the single player levels with a friend in tow controlling their own creature, so while it adds to the possible fun, it doesn't add much to the value.

Flow is an interesting experience, and can help kill a few hours while you gaze at the pretty visuals and try to figure out what each creature’s abilities are. I applaud thatgamecompany for going outside of the bounds of normal console games to create something different. The easy to get into gameplay, soothing audio and interesting visual style help to make this game worth a look, but the short playthrough time and often repetitive levels make this a difficult game to recommend. If you are looking for a cool relaxing experience and don’t mind paying for only two hours or so of gaming then give this game a look, but otherwise I suggest skipping this title.