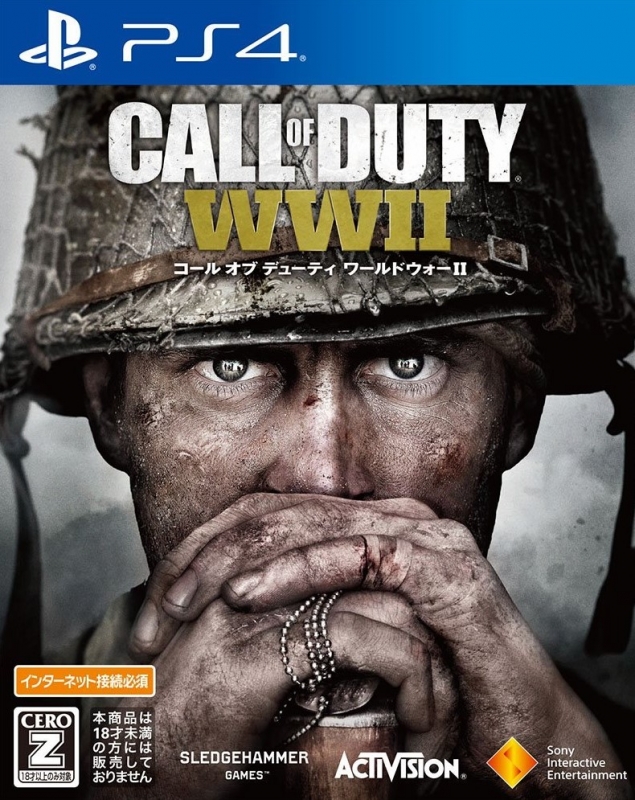 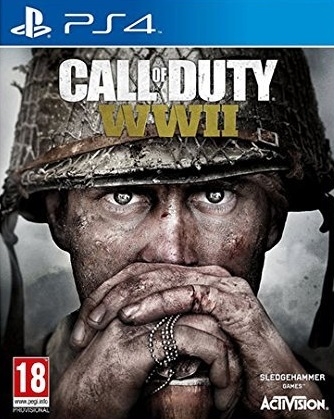 History repeats itself as Call of Duty finally returns to the battlefields of the Second World War. Since 2007’s Call of Duty 4: Modern Warfare, and the subsequent explosion in popularity that the game brought to the series, the franchise has shifted its attention to more modern and even futuristic conflicts (except for 2008’s World at War, which was set in the Pacific Theater).

Last year CoD’s chief rival, EA’s Battlefield, beat it to the punch by going historical with the WWI-based Battlefield I, which was well-received commercially and by fans. Not to be outdone, Sledgehammer Games has tried to return the series to its former glory with Call of Duty: WWII, but the results don’t do much to distinguish it from the pack. From its generic title to its overbearing offering of microtransactions, much of CoD: WWII feels soulless and market driven. 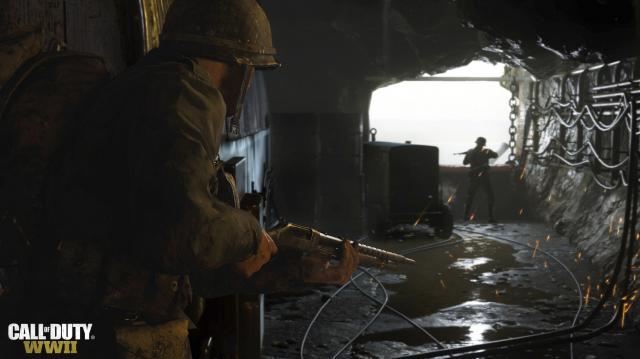 The campaign features 11 missions that begin with the D-Day landing, then quickly move on to the liberation of Paris, the Battle of the Bulge, and other famous battles involving the U.S. Army in the European theater. There are mementos to collect throughout the single player campaign that give some incentive to explore the otherwise overly linear levels.

In an old-school twist, your soldier no longer heals automatically if he manages to stay out of the line of fire for a few seconds. Now you have to rely on health kits that you either find across the level or receive from your squad mate. It changes your fundamental approach to facing the enemy and forces you to be more cautious under fire. For the most part things are the same, though, with the abundance of quick time events and occasional vehicle segment breaking up the FPS gameplay.

Other members of your squad can provide you with ammunition, help you call in an airstrike, or highlight enemies making them easier to hit. Josh Dumel is the latest Hollywood actor to be featured in a lead role for the series, playing a grizzled sergeant that expects too much from his unit. The Nazi Zombies mode also features the performance and likenesses of actors such as Vhing Rhames and David Tennant for added star power. In terms of acting, however, it is Jonathan Tucker as your closest squadmate Robert Zussman who turns in the best performance. 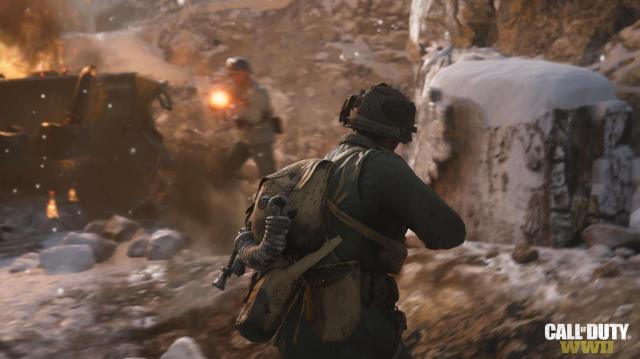 The storytelling relies more on pre-rendered cutscenes than past entries, but the historical setting has not got in the way of this series’ penchant for over-the-top action set pieces and scenes of full-on destruction. Though there are no nuclear weapons dropped or lasers fired from space, you do get to experience well executed building collapses, train derailments, and other spectacles of war.

Though it is fun while it lasts, the campaign is not as memorable as it could be. There is very little incentive to revisit it unless you are a perfectionist that wants to improve your stats. You have the opportunity to perform heroic actions such as dragging an immobilized fellow soldier out of the line of fire or stopping them from being killed in a hand-to-hand encounter with the enemy, and the campaign tries to achieve emotional resonance by making you feel part of an actual platoon, and to a certain extent it succeeds, but it falls back on so many clichés of WWII American soldier narratives that it is hard to take it too seriously. At least I can say that the storytelling has thankfully moved away from simply killing major characters unexpectedly for shock value, though it still features startling (and almost comical) images of gore and war violence. 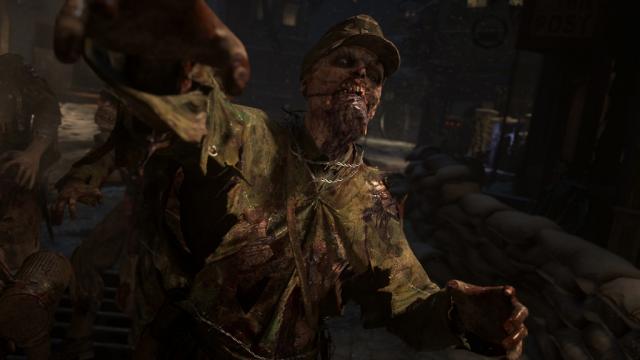 Stealth and performing silent takedowns has always been a small part of Call of Duty campaign missions. This time however the game puts you in the midst of some tense scenarios behind enemy lines with deeper stealth mechanics that will have you deliberately thinking out each step you take. These sections are a welcome surprise and provided some of the most memorable moments of the campaign.

The game also does it best to evoke the feel of World War II. The architecture of war-torn Europe is something to behold when recreated in such minute detail. The music is equal parts swelling, somber, and patriotic. The sounds of guns, tanks, bombs, and flamethrowers all convincingly evoke the sense of being on a battlefield. Other aspects of the sound design are less convincing, however, in particular some of the non-American accents which prove questionable to the point of being abrasive. 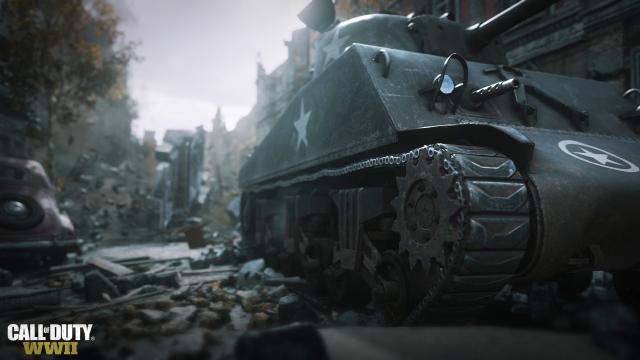 Once you start playing online multiplayer you will be asked to join a division from one of Infantry, Airborne, Armored, Mountain, and Expeditionary, which vary in their combat tactics and the equipment they use. You rank up and eventually prestige through each division individually, which is an attainable and rewarding goal for any dedicated CoD player. I chose Infantry from the outset and found that to be the most enjoyable division for my style of play.

After the last few entries included superhuman abilities such as running on walls and invisibility the multiplayer definitely feels more grounded this time. The gameplay is still as fast and frenetic as it’s always been and definitely still the game’s biggest draw, though. One of my favorite aspects of the multiplayer is the level of control you have over many of the scorestreak perks, some of which allow you to do things such as briefly pilot a plane on a strafing run, call in paratroopers for back up, or directly guide the path of a falling explosive. 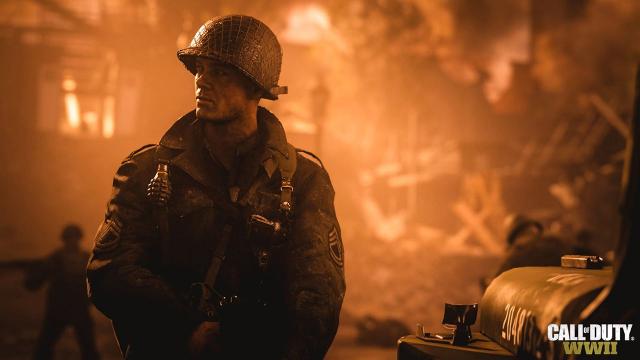 The multiplayer hub is set up as if it's a military camp that you're free to roam around from a third person viewpoint. While all the multiplayer essentials are still accessible via a familiar menu interface, the game tries to provide incentives for you to explore and interact with this environment. In the base camp you can attend target practice on a live fire gun range, receive orders to complete in order to earn rewards, and even a theater where you can watch live Call of Duty: WWII MLG Events. While the virtual headquarters is fun to explore at first, it feels superfluous to the core experience and can be annoying to navigate when it is filled with too many players.

In terms of multiplayer additions, the War multiplayer mode is an objective-based mode that brings out the best competitive and cooperative elements of the gameplay. For instance you may be given the objective of defending a certain location from your enemies’ advances, and should you fail your team simply moves onto to the next objective until you finally stop the attack or fail them all. After halftime your team switches sides and you can go on the offense, with a combination of your score and completion time ultimately deciding which side is victorious. Hardpoint matches are similar to the traditional Domination modes except that the desired area you are supposed to control switches often. These are of course just two of the more enjoyable additions that coexist alongside the staples of Team Deathmatch, Search and Destroy, Kill Confirmed, and more. 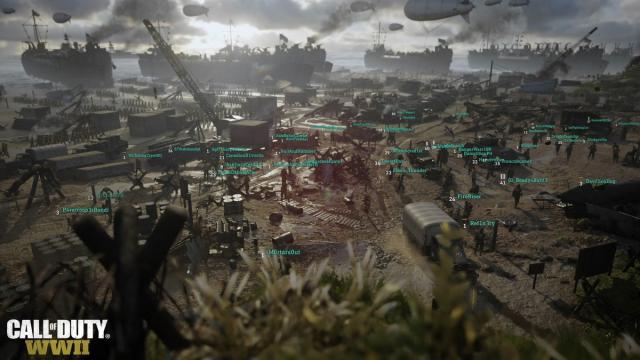 Much has been made about lootboxes and the pay-to-win feel they bring to multiplayer games lately, and the use of them here is definitely questionable. CoD Points are sold for real world currency in denominations ranging from $2.99 to $99.99 and can be used to purchase supply drops. You call in supply drops at your headquarters in full view of any other players that may be around so that they can then see what kind of loot you're getting.

In the beginning, your progress and unlocks all seem reasonable and balanced, but the more you play the more you realize that equipment you can only get from lootboxes definitely tips the scale in favor of the haves over the have-nots. This is all on top of the game's optional Season Pass, which costs $49.99 and comes with the promise of regular content updates throughout the year. 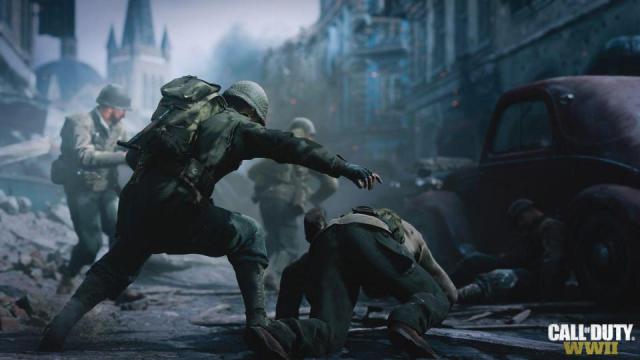 Nazi Zombies is treated as the game’s third pillar and holds its own admirably. The silly tone flies in the face of the rest of the game’s honorific presentation. Maps are sprawling and intricate with many secrets to discover and strategies to master, and you should have no problem assembling a full party of random online players, but it's obviously more enjoyable with your own squad of friends you can trust in and/or joke around with. As you encounter wave after wave of zombies leading to a showdown with a boss you earn points and experience that level you up in much the same way as they do in ordinary multiplayer, but after playing multiple rounds that lasted upwards of two hours I’m not sure if the end-game justifies all of the time and planning necessary to achieve the best results.

At launch the online aspects experienced noticeable connection and stability issues that have since been addressed by the developers. Since then I have not experienced any glaring technical hiccups that have diminished my enjoyment of the game. The offline local multiplayer is also a welcome option as well. 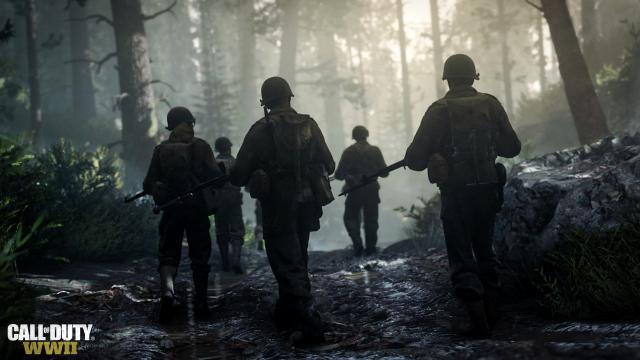 While it is nice that the series has (literally) come back down to Earth and revisited it roots, at the end of the day Call of Duty: WWII feels like the mass market play-it-safe product that it is rather than a sincere attempt to revitalize the franchise. If you ignore all of the attempts to make more money off of players, the vanilla version day one content is satisfying in itself, but not enough to attract any new players or gamers like myself who may have skipped the past few editions of this annualised series. There are some elements that definitely feel at home, such as the online hub and War mode, but the novelty is not quite enough to entice many besides the diehard fans to enlist in this particular war.

This review is based on a retail copy of Call of Duty: WWII for the PS4