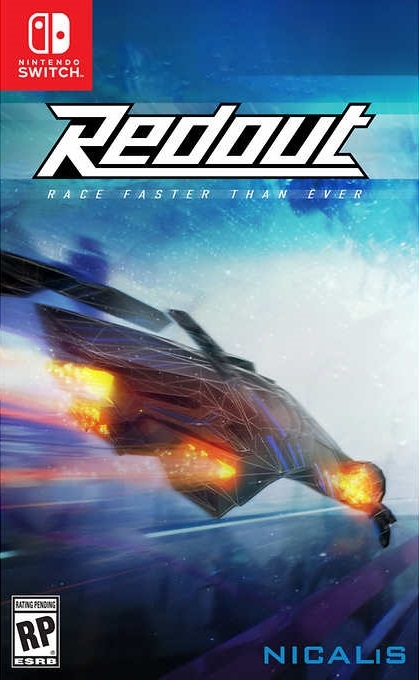 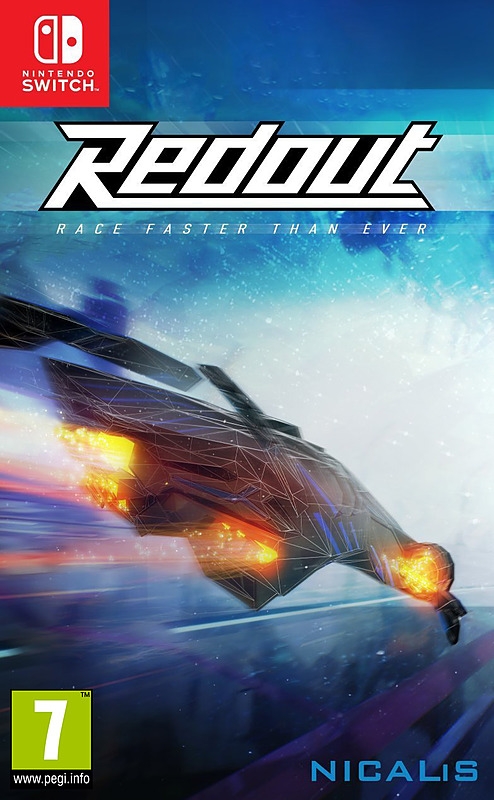 The day of the high-speed futuristic racer has come and gone, thanks to Sony shelving WipEout and Nintendo neglecting F-Zero. Yet plenty of small and mid-range studios have moved to fill the void, turning out games like Redout, a sleek, fast anti-gravity racer with a substantial single-player career mode, outstanding track design, and a thrilling sense of speed. Due to some graphical issues, multiplayer misses, and a grindy campaign, it won't make you forget about the greats of the sub-genre, but it's still an adequate far-future racer.

Redout is a high-speed arcade racer, typical of the fifth gen where games like F-Zero X, WipEout, Extreme-G, Rollcage, and Star Wars Episode I: Racer ruled the roost. Through a series of looping, winding, gravity-defying tracks, players will steer 28 futuristic vehicles, being careful not to collide with walls, grind against sleep inclines, or bounce off rival racers. Every vehicle has unique stats, which inform acceleration, top speed, grip, structural integrity, energy pool, and energy recharge speed, as well as upgrade options and slots for active and passive perks—modern elements in a game that mostly pays tribute to the past. 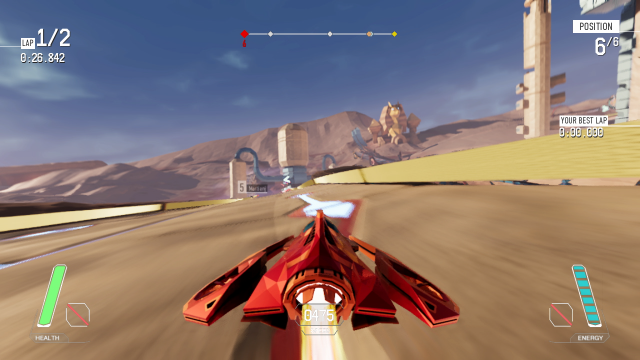 While Redout has some flaws—more on those later—it absolutely nails the basics. The control scheme, where players steer with the left stick and strafe and pitch with the right stick, is intuitive, responsive, and easy to use. Tight, sensitive controls are mandatory for a fast-moving racer with sharp turns like Redout, and the developers at 34BigThings deliver the goods. The developers also deliver a stellar collection of tracks. There are 60 courses in all, including all DLC maps. They range from dystopian Earth settings to otherworldly scenes like the Martian landscape or the inside of a virtual training session. Standouts include Sequioa: Tsintah, a roller coaster ride through giant redwoods, and Mars: Curiosity, with its tubular tracks.

While many courses are available from day one, others are unlocked via the game's substantial career mode. Here, you'll buy and upgrade vehicles, assign perks, and race through dozens of events. The breadth of events in Redout is impressive. There are standard options like Time Trial, Race, and Last Man Standing, and unusual contests like Instagib, where wall damage is increased and there are no respawns, and Score, where hitting turbos, scoring fastest laps, and avoiding crashing will help you rack up points. The best mode of all is Boss, a long race across five different tracks connected by teleporters. 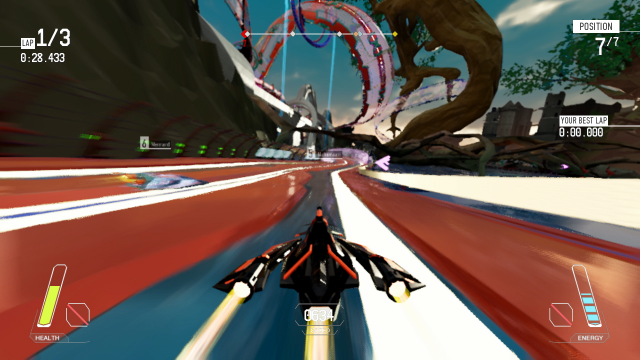 The downside to Career mode is the grind. While early events are easy enough, races in Class II and beyond are punishing. Here, forward progress slows down and you'll need to replay older events to earn experience, which unlocks new tiers of vehicles, and cash, used to purchase and upgrade those vehicles.

Despite any repetition, you'll likely spend most of your time in Career, as the other options are inferior. There's a Quick Race mode, which allows players to experiment with different vehicles, tracks, event types, and perks (and vie for online leaderboard supremacy), but it's essentially a big practice mode for the campaign. Redout also supports online multiplayer for up to six players, but the lobbies on Switch are deserted. Strangely, there are zero splitscreen options in the Switch port—a serious blow to a system designed around local play. The moral of the story: if your biggest priority in Redout is competing against other human players, skip the Nintendo version. 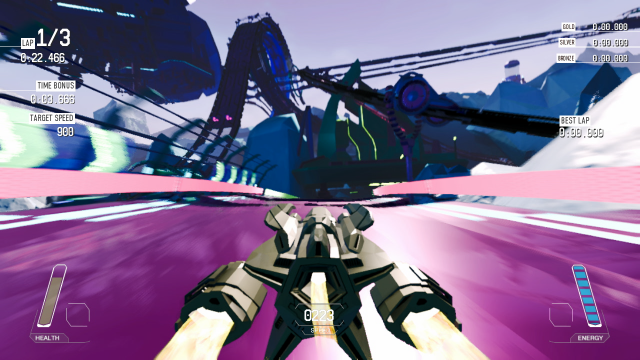 The lack of splitscreen options might have something to do with the game's technical specifications, as Redout struggles to look good on a single, undivided screen. Already a visually meek game due to a lot of low-polygon assets—although, to be fair, lighting and shading effects are nifty—Redout on Switch suffers some downgrades in image quality. While it manages a stable (if less than ideal) 30 FPS, its dynamic resolution can turn things blurry and indistinct when the action is especially busy on screen. This is particularly true in handheld mode, which is sometimes a fuzzy mess.

Redout on Switch nails all the big stuff—controls, racing mechanics, track designs, an exhilarating sense of speed and momentum—but stumbles in Career mode balance, multiplayer viability, and technical performance. Some tweaks to enemy AI, improvements in resolution, and the inclusion of offline multiplayer would make a big difference. Even without those elements, the game delivers where it counts most: the tactile thrill of high-speed racing. Redout is a decent racing experience overall, chiefly for fans of moribund franchises like WipEout and F-Zero.

This review is based on a digital copy of Redout for the NS, provided by the publisher.