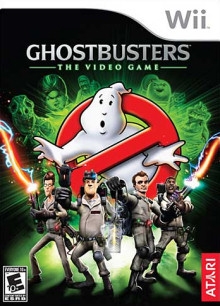 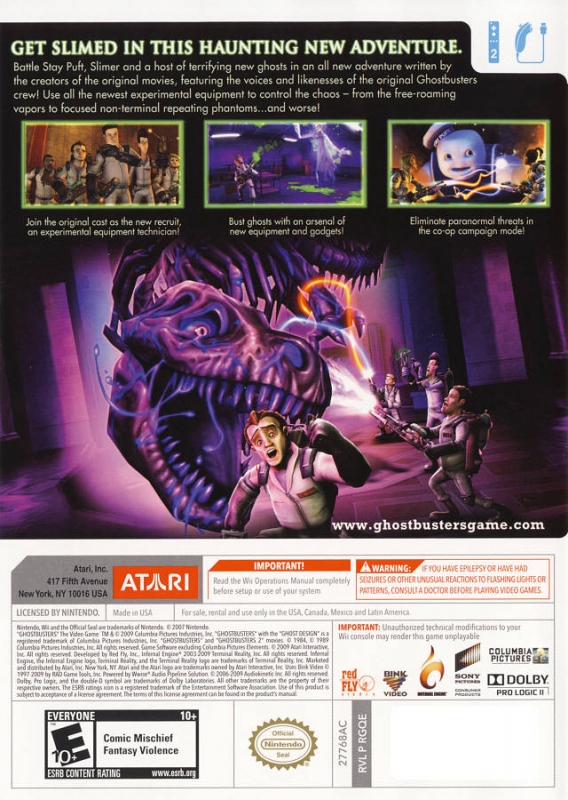 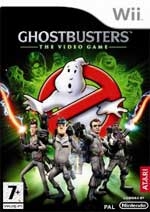 Ever since the release of Ghostbusters II in 1989, fans have been eager to return to the slime-filled world of Peter, Ray, Egon, and Winston. Well, it’s been twenty years, but Dan Aykroyd Harold Ramis, and developers Terminal Reality and Red Fly have finally seen fit to pen a new script, which pits the specter-trapping quartet against a Gozer-worshiping ghost named Shandor. Well, make that ‘specter-trapping quintet’. See, the hook here is that the ‘busters have hired a new ‘Experimental Weapons Technician’ (you!) in order to test out their new equipment without risk of disintegrating themselves or taking the blame for blowing up a city block.

The basic gameplay generally involves you running around various environments, destroying stuff and capturing ghosts by pointing at them with the Wii Remote and hitting them with your various weapons (most often the traditional Blast Stream). Once their health bar is worn down, you’ll switch to the Capture Beam and, following onscreen prompts, physically bash them into various walls and objects until a second bar is empty. Then, while they are dazed, it’s time to hold the Z button on the Nunchuk and make an underhanded throwing motion, which will cause your nameless male or female character to toss out a trap to suck them into. Certain ghosts require some sort of variation on this basic strategy, such as tossing a battery at an electrically-charged ghost to drain its power before capturing it, but for the most part, you’ll be doing the same relatively-enjoyable task for most of the game. It’s just a shame that the Wii Remote doesn’t rumble as you’re ‘wrangling’ a ghost, as just this simple feeling that it’s you firing this high-powered beam at a negatively-charged ectoplasmic entity would have increased the fun substantially.

Unfortunately, this repetition is probably the most upsetting part of the game. Yes, the reason people will be buying this game is because busting makes them feel good (a fact that Venkman reinforces after a difficult fight), but a little more variety would have gone a long way. You’ll even be destroying or recapturing many of the same ghosts that the group already did in the original movies (in almost the same way, to boot). Don’t get me wrong—it was a lot of fun fighting and recapturing Slimer in the ballroom of the Sedgewick Hotel, or staving off the Stay Puft Marshmallow Man from the hotel’s roof, but it just feels like they could have done so much more with the encounters. They were great fan service, but this game has been tagged as ‘Ghostbusters 3’, not ‘Ghostbusters: Extra Slimy Edition’. The repetition isn’t helped by the glitches, either. In one section, I had to use batteries to steal the power from three electrically-charged ghosts and place them inside a generator. In the thick of the combat, I thought that one of my batteries was charged, so I tossed it in. Unfortunately, I was wrong, but instead of being spat back out, the battery got stuck inside the charger. After about twenty minutes of trying different approaches, I was finally able to remove it by tossing several traps at it, but this was still an oversight that should have been dealt with.

The only other gripe I have with the combat is the partner AI. You’ll almost always have at least one fellow Ghostbuster ‘fighting’ beside you and shouting tips—but they’re practically useless. They’ll tell you that a particular ghost is invulnerable to the Blast Stream, then attempt to use that weapon on them for the next 30 seconds until you save them or they pass out. Sure, they’ll be constantly firing at all enemies, and they’ll toss out a trap or two, but they’re really only good for distraction purposes and reviving you if you get taken down.

The biggest (and most fun!) divergence from the combat has to be the PKE meter and PKE goggles. There will be times when the game switches to a more cerebral approach, where you’ll do your best Egon impression and walk around using the meter like a divining rod to pick up and flush out hidden ghouls, as well as to scan enemies and objects for information. The goggles are used to detect important hidden objects, like ghost traps and invisible platforms and doors. I was surprised to find myself enjoying these parts at least as much, if not more than, the actual action-oriented sections, and I’m glad they decided not to constantly bombard the player with fighting.

The visuals in the game aren’t anything to write home about, but the cartoon style chosen for the Wii version of the game allowed the designers to use highly exaggerated animations to comedic effect. Everyone animates with a lot of pep, and the frame rate never dips below 30fps no matter what’s going on. This is especially impressive given the sheer amount of destruction going on in the environment.

The dialogue is, for the most part, up to par with the hilarious two movies. The original actors return to voice the main cast, so you’ve got Egon “I’m absolutely terrified right now” Spengler, Ray “Hey! He’s taunting me!” Stantz, Peter “How come this mump gets all the new stuff?” Venkman, and all the rest of the gang. Unfortunately, Bill Murray’s Venkman sounds like he’s talking in his sleep (more so than usual), and that takes some of the ‘oomph!’ out of his one-liners. The written component is great, as well, with plenty of references to popular video game culture. When reading the scan for a ghost chef’s fake food, be prepared for ‘The cake is a hoax’ jokes, and be on the lookout for posters for such amazing-looking new games as “Super Fungus Bros” and “Smell of War”—not to mention the evil 8-bit game sprites that attack you!

Regarding value, it really depends on how much the player likes collecting things. The game took me eight to nine hours (not including deaths) on my own in the Normal mode. Exclusive to the Wii version is split-screen cooperative play through the entire game, though unfortunately there is no online multiplayer functionality for this version. There are also well over 200 art pages and scans to collect, which are definitely worth collecting for the die-hard GB fanatic—especially since they contain witty comments from Ray and Egon. Getting enough of these earns five different unlockables, although the ones that really give you any help through the game are useless, as you need to have already beaten the final boss and gotten all the collectibles in order to get them. You can also wander around the Ghostbusters’ firehouse, though sliding down the fire pole and speaking to the somehow-not-destroyed painting of Vego the Carpathian from the second movie are the only things that separate this area from a typical Options menu. Other than that, there aren’t much in the way of extras in Ghostbusters: The Video Game—what you see is what you get.

So, in the end, is this game a worthwhile addition to your Wii library? If you’re a Ghostbusters fan, then you should absolutely go out and buy this without hesitation, as it is pure, distilled fan service. Others will have to decide for themselves whether the writing and fun-but-unpolished gameplay shines enough to warrant their $50. It’s absolutely good for a rental no matter who you are, and even casual fans of the series shouldn’t be afraid of this ghost!