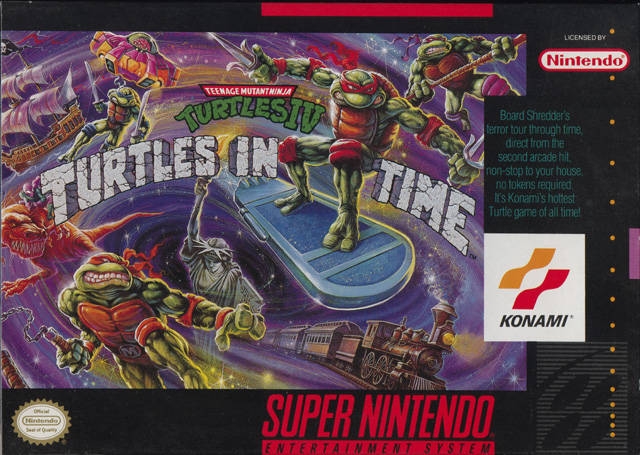 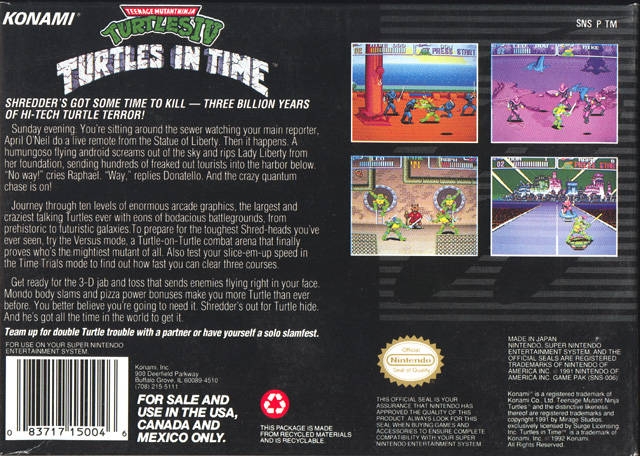 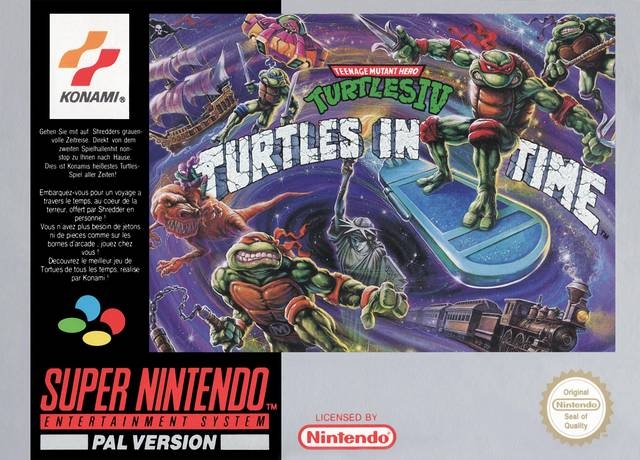 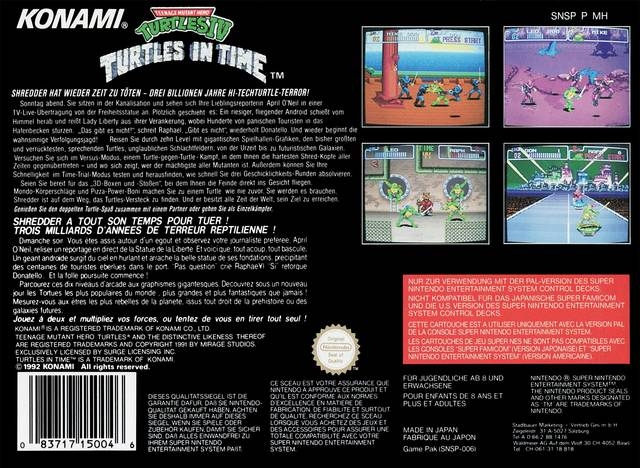 Yes, there was a time when licensed properties and quality gaming could co-exist.

In the early 1990’s, Turtlemania was everywhere. Movies, comics, cartoon series—Raph, Mikey, Donny, and Leo were everywhere. Of course, this inevitably led to video games. While most of them were well-done and popular, it’s commonly agreed that the perfection of the formula was Teenage Mutant Ninja Turtles IV: Turtles in Time for the Super Nintendo.

The main reason TMNT IV has stood the test of time so well is that it is an example of near-perfection in the side-scrolling beat-em-up genre. It’s simple enough for anyone to play, but has layers of depth. Two can play cooperatively, and only two action buttons are used, but they can perform a large variety of actions. Jump and attack for a jump kick. Jump, wait till the turtle starts to spin, then unleash a flying ball of swords or sticks in their face. Alternatively, wait until they’re back near the ground to execute a flying kick that sends enemies flying. Hit an enemy once, then run into him and hit him again to throw him into the screen. Press both buttons for a special attack that is unique to each turtle.

The only noticeable knock against TMNT’s controls is that sometimes they can be too simple. Case in point, the game’s multiple methods of making your turtle run. There are two methods of doing this — double-tap right or left to run in that direction, or walk in that direction for a few seconds to run automatically. Simple enough, but they bring some problems. Sometimes you’ll run when you don’t intend to, which can cause problems. For example, you may wish to walk to the right and jump, but if you accidentally start running and press the jump button, you’ll do a forward flip instead. This can put a screw in your battle plan. On the other hand, sometimes you’ll want to run, but it takes too long to start. When a huge wrecking ball is bearing down on you, the extra split-second it takes to double-tap in a direction can cost you precious health.

As is typical of the genre, the gameplay mostly consists of walking to the right and laying the smack down on anyone or anything that gets in your way, with the goal of reaching and defeating the boss. The soldiers of the Foot are varied, coming in punching, sword- and axe-wielding, shuriken-tossing, and whip-cracking forms, among others. Then there are Mousers, Robots, Rock Men, dinosaurs, and many environmental hazards that can be used to your advantage. Not to mention the classic TMNT bosses, including Baxter Stockman, Leatherhead, Bebop and Rocksteady, Tokka and Razar, Metalhead, the Rat King, and of course Shredder (complete with his Super Shredder form from Secret of the Ooze).

While moving forward and beating down enemies is the primary focus of the game, the game does give a welcome change of pace at just the right moments. Surfing through the sewer while avoiding pizza monsters, spiked balls, and closing gates, while collecting bonus pizzas never gets old. Neither does throwing foot soldiers into the screen at Shredder’s machine while trying to avoid the gaze of his targeting reticle.

With such varied enemies and combat abilities, Turtles in Time is a blast playing on your own. However, the real experience comes from co-op. The camaraderie of teaming up to take on the Foot magnifies the fun tenfold. Did one of you get grabbed by a Foot soldier? It helps to have a buddy to smack him off. Perhaps one of you distracts Shredder’s aforementioned reticle while the other pelts him with enemies? The boss fights where you take on two enemies at a time, such as Bebop and Rocksteady or Tokka and Razar, are made much easier when one player can focus on each. Also, when playing in single-player, if you lose all of your lives you must restart the level when you continue, whereas multiplayer allows you to continue right where you left off.

Rounding out the TMNT IV package are a couple of extra modes outside the main game. There’s a time trial mode, which pits one player against a predetermined set of enemies in environments based on the story mode, and a Versus mode where two turtles can fight it out in their sewer home while Splinter and the others watch in the background. This mode is appreciated and enjoyable, but it’s very unbalanced. Each turtle has the same moves as in the main game, but the extra reach of Donatello’s bo staff makes him almost invincible. It’s also very easy to throw your opponent into a wall and then wail on him until half of his health is gone. This mode is a fun distraction, but players likely will play it once per turtle and head back to the story mode.

This is why the game’s short length is so unfortunate. A semi-experienced gamer can finish the game’s nine levels on the Normal difficulty setting in around 45 minutes, and a skilled duo can accomplish it in approximately 30. Fortunately with higher difficulty levels, playing through with different friends, getting higher scores, and the sheer fun factor of the game ensures that it’s one gamers will be replaying many, many times. Aside from the length, the one true gripe I have with this game is that it screams for multitap support. The arcade version supports four players simultaneously, but the SNES version must settle for two.

Like many well-done games of the bit generations, the graphics in TMNT IV have aged very nicely. Michelangelo, Donatello, Leonardo, and Raphael all have very large, detailed, expressive sprites with many frames of animation and vibrant primary colours. While some games of the era may have been content to change the bandana colour and the held weapon, each have their own distinctive stance and movement style to ensure that no one will be confusing them for one another. There is even an option to switch between their animation style from the cartoon or their darker versions from the comics.

The enemies have received just as much attention to detail, from the exaggerated windup for a punch, to guns that shoot massive hands, to the absolutely massive bosses. Replaying the game recently, I was still awestruck by the massive Krang in the Big Apple level, whose just appears in the background with a head half the size of the screen—and he isn’t even that level’s boss! The environments have little animation to them (except for environmental hazards), but they have enough charm that it’s not required. You’ll fight in such varied locations as New York City, an alleyway, prehistoric times, the Technodrome, and of course, the sewers. From a technical perspective, the game runs like butter most of the time. There is some fairly noticeable slowdown, at times, mostly relegated to areas where there are fifteen to twenty enemies onscreen at once.

The game’s music isn’t the best in the business, but it doesn’t have to be. Mostly consisting of techno remixes of the classic ‘Heroes in a Half-Shell’ song, it gets you suitably pumped for the action at hand. Nothing more, nothing less. The standout is the boss music, which changes the pace and is suitably frantic. The sound effects are a different story. From the satisfying ‘POK’ when a nunchuk successfully connects with an enemy’s face, to the enthusiastic, ‘COWABUNGA!’ when a boss is defeated, it really feels like the player is participating in the TMNT cartoon. And who can forget ‘Pizza time!’, or, after a close encounter with a spiked ball, “My toes! My toes!”.

TMNT is a product of the golden age of gaming in every sense. It’s vibrant, animated, easy to learn, hard to master, and just plain fun. The gameplay is varied, the graphics are great. The music could use a little work, but the sound effects are superb. If you’re a Final Fight fan and have yet to experience this 16-bit classic, do yourself a favour and check your local used game store—you’ll be glad you did.