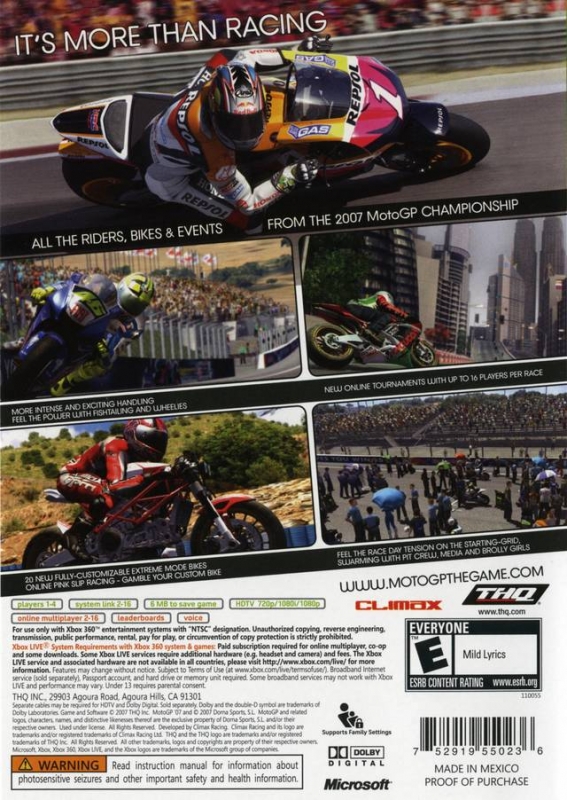 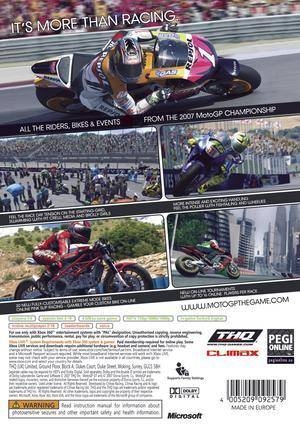 Again a Moto GP game worth your money

Presentation - 7.0
Gameplay - 9.0
Value - 8.0
Season 2007 of the Moto GP is the best one yet
I admit that the Formula 1 this year was exciting, now that German with the red car ended his career. But the Moto GP is really my favorite. Not only because it is always is exciting to see who will win the race, but there are many more shows during the race to see. Sometimes the racers overtake four or five times per round, and the drivers often fall.

Ant fuck
For this and other reasons, the Moto GP series is dear to me. Let us not call sissies, this is simply the best raceserie available. It stears the best, the graphics were always the best, the Extreme Mode with extreme engine is cool, the action is tight and they have of course the official license. The latter can be a minor ant fuck, but for purists like me is really a must. I would like racing as Rossi and try to beat that annoying Stoner (born in the village with the brilliant name Kurri-Kurri) on his Ducati.

Airplanes
I will not say that Moto GP 07 feels perfect, because it is not. The crashes are looking occasionally a little shaky, the framerate poops every now and then, the AI is not always convincing and the animation of the drivers leaves here and there to be desired. But it is not really disturbing. I see racegames to the race, the rest fascinates me.  Public moving drivers acting and more aircraft flying around during rush hour than at Schiphol. But nevermind that! Eventhough ten naked ladies are in front of me, I want to race. I want to cut corners, use my motor for stabbing the opponent,find the right brakepoints. Moto GP 07 serves me again very well.

Fatal
Although THQ made a career mode with an RPG-light touch, Moto GP 07 is just 22 riders, as many engines, the 18 official tracks, lots of asphalt and a finish-line. And then! All the races I rode hard mode was exciting and lively. Because I have already said before, racing with engines is harder than racing in a car. The feeling that you lose your engine is so huge, that you will  constant move between front and rear, for fear is in any curve with Moto GP. In Moto GP 07 a tiny mistake can be a fatal error. Frustrating, that 's certain, and many people will curse the game. But every race it is possible to win. And if I can do it ...

Get it if:
- You are allergic to all four wheels possessions.
- Rossi is also your hero.
- You think Assen is the most beautiful city on earth.

Conclusion
I can not deny that Moto GP 07 has a number of shortcomings. Nevertheless it is still the best playing racegame engine and has the official license. That seems enough for the top position in the genre!