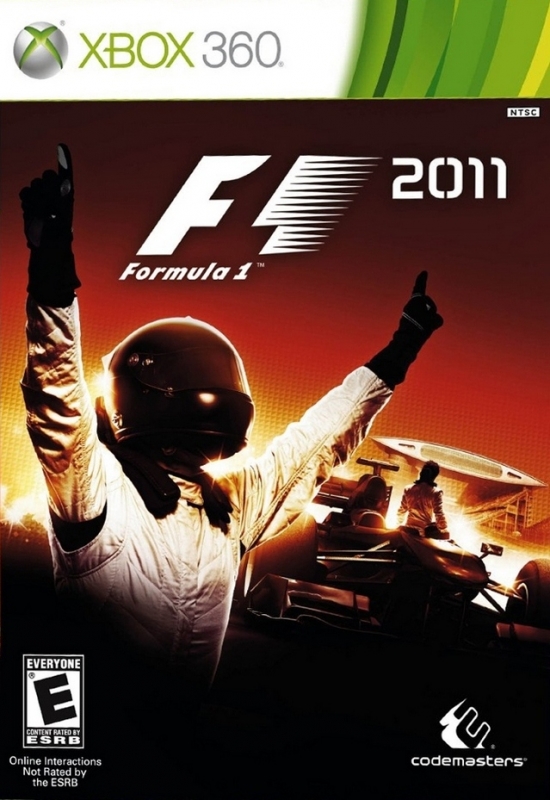 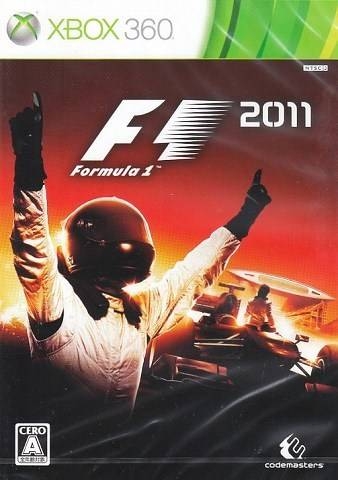 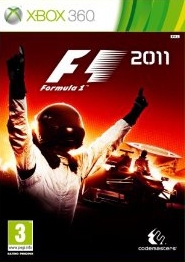 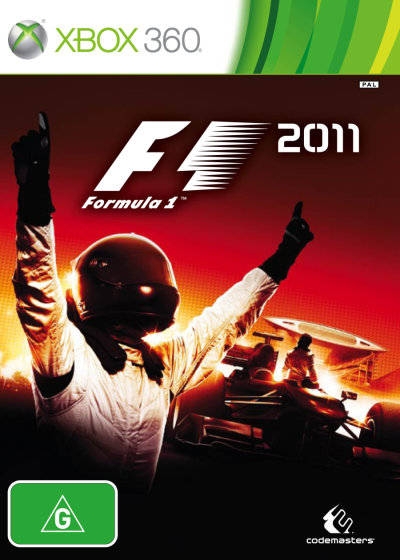 Did I hear you say “Safety car”?! Form an orderly queue please.

Codemasters laid an impressive groundwork for the F1 racing licence with last year’s F1 2010 and now they’re back for the 2011 season. F1 2011 doesn’t fundamentally transform last year’s game, but instead builds upon it, adding a number of important new features that hardcore F1 fans won’t want to miss out on. But does F1 2011 add enough to the series to justify a yearly iteration?

Those of you who bought F1 2010 will find yourselves instantly at home when you make a start in F1 2011. The handling feels altogether familiar, though Codemasters have made some nuanced changes to increase the game’s realism. For example, I find I’m now able to attack corners much more aggressively in dry conditions than I could in F1 2010 without fear of spinning out, whereas racing in wet weather is now much more of a nightmare (as one imagines it to be in reality). Oh, and there’s a safety car now, so you can all line up single file and trundle around the track in a convoy, like it’s Gran Turismo or something.

The 2011 season’s rule book has been put into effect – which means the introduction of KERS and DRS. The former is an 80BHP boost which lasts up to 7 seconds and is replenished each lap, whilst the latter allows you to open a portion of the car’s rear wing on certain parts of the track during races (or whenever you feel like it in practice and qualifying); the idea being to give you sufficient speed on the straights to draft and then slingshot past the guy in front of you.  You soon adjust to these two new features and using them becomes second nature, but their impact on lap times is not to be under-estimated; judicious use of both is essential to eking out the best lap times.

The 2011 season also sees the introduction of two new tracks – Nürburgring (replacing Hockenheim) and Buddh International. The latter is relatively poorly rendered compared to all of the other tracks. Many of the environmental features look distinctly unimpressive and there’s an all-round lack of polish and detail; it feels like a ‘concept’ track, which is perhaps representative of the actual circuit’s condition at the time of development. Still, it’s nice to have a couple of new tracks to race around at least, because the rest of the tracks will now be overly familiar to most of you. Graphical changes to some of the existing tracks have given them a fresh lease of life though; take Yas Marina, which was my least favourite track last year because of its dusk setting which made it a chore to race around. It now feels completely different in daylight and much more bearable as a result.

Racing around in poor weather conditions is once again a feast for the eyes. The rain effects look nothing short of amazing, with streaks of water running across the screen, spray coming up off the vehicles in front to blind you and beautifully reflective pools of water forming on certain parts of the track. It becomes virtually impossible to drive competitively, but it’s jaw-droppingly beautiful. Elsewhere the graphics don’t feel as strong as they did last year – not because there hasn’t been improvement (there has, and it’s definitely better looking than 2010), but because it’s only a very minor graphical bump. It’s one of the major problems with yearly iterations of games; the graphical leaps become almost unnoticeable from year to year, even if the overall progress across a generation is quite stark, so unless you place the two versions side-by-side you won’t notice much of a difference graphically. 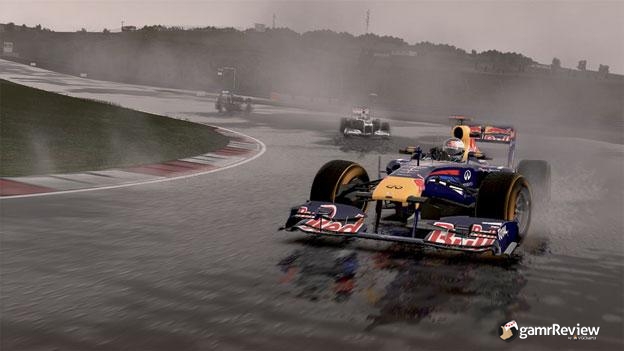 One minor, but very, very much welcome improvement is the change to split times. They’re much more accurate and informative this time around. In F1 2010 the split times were, frankly, pretty damn useless, but now you’ll know exactly how far away your closest competitors are each and every section of the lap. Going straight from the good to the bad though… the loading times are atrocious, and there are far too many instances where the game requires a loading screen. It’s a particularly pressing problem in the Career where you have a lengthy loading screen to get to the paddock, sometimes with a pointless ‘living the life’ (ergh) press interview in between, then another loading screen to get to the garage, then another loading segment to get to the actual race. And woe betide you if you don’t want to complete Practice or Qualifying; where in F1 2010 you could skip them from the garage, this time around you have to retire to the paddock and restart the whole loading process all over again if you want to skip one. And if you want to skip both you’ll have to repeat the process all over again a second time. It’s undoubtedly an exaggeration to say it feels like you spend more time waiting for a career race to load than you spend actually racing, but it damn well feels like it at times. That it’s all even more lacking in intuition than 2010’s already less than ideal menu structure makes it all the more galling.

Returning – briefly - to the ‘living the life’ guff. The less said about it the better. I really did enjoy F1 2011 a lot, so I don’t want to waste too much space complaining about minor aspects of the game and giving a false impression of my feelings towards it, so I’ll just say this: the sooner developers stop trying to shoe-horn story-based elements into racing games the better. Whether it’s Shift 2: Unleashed’s weird video clips of Vaughn Gittin Junior, or MotorStorm: Apocalypse’s poorly drawn comic-inspired cut scenes, or F1 2011’s downright hideous and repetitive cut scenes, with awful character models and an e-mail inbox full of spam (don’t ask), it detracts from an otherwise polished and enjoyable experience. At least you can skip the cut scenes and ignore all the other fluff, so there’s that. 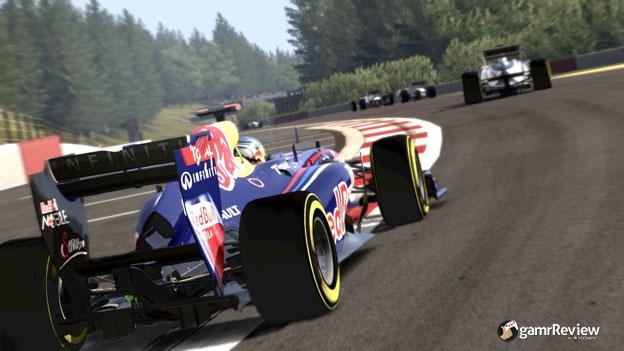 You can, of course, bypass the career stuff altogether and simply use Grand Prix mode, which allows you to set up quick races (or a series of them if you want), playing as any of the current roster of F1 teams and drivers. New to F1 2011 is offline splitscreen play, which is a great inclusion. The other new multiplayer aspect is Co-op Championships. It’s important to clarify that this is an online feature only, and so you cannot play a Co-op Championship in split screen, which is unfortunate because it would be a great way to get more use out of the splitscreen feature. The co-op career system is undoubtedly the most significant addition to the franchise in this year’s iteration; you can play online with a friend in a full co-op season, racing for the same team but at the same time competing for the Drivers’ Championship against a full complement of AI racers. Competitive online races can also now feature a full roster of 24 cars on the grid – with up-to 16 real-life drivers and 8 AI bots. Elsewhere the online aspect feels very much like F1 2010 (and indeed most Codemasters racers), which isn’t a bad thing.

The other new feature is a new Time Attack scenario mode, which slots into the Proving Grounds alongside an ordinary Time Trial mode. There’s not much to say about the Time Attack challenges; they’re basic scenarios where you’re given a car, placed on a track and challenged to set the best lap time you possibly can, racing against bronze, silver, and gold ghost cars. It feels like it may be a small stepping stone towards a more substantial mode in future F1 games, but as it stands at present it’s pretty insubstantial and doesn’t add anything to the game. 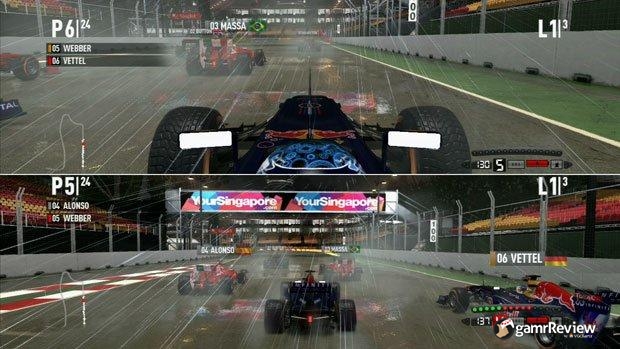 Franchises with yearly iterations are tough beasts to review and score because although they often consistently improve with each entry they rarely, if ever, make a massive leap forwards. It’s better than the one before it, but is that enough? Such is the case with F1 2011. I found it to be a better game than F1 2010 in almost every way, but it’s only an evolutionary sequel, not a revolutionary one. If you’re a hardcore F1 fan then you should make no bones about buying this sequel, and if you sat on the fence back in 2010 and you’re tempted to finally take the plunge now then I definitely recommend it. However, I’m in a quandary as to whether or not I should recommend this to more casual fans who picked up F1 2010. In such cases it’s perhaps advisable to sit out a round, avoid franchise fatigue and jump back on board next year when F1 2012 releases.