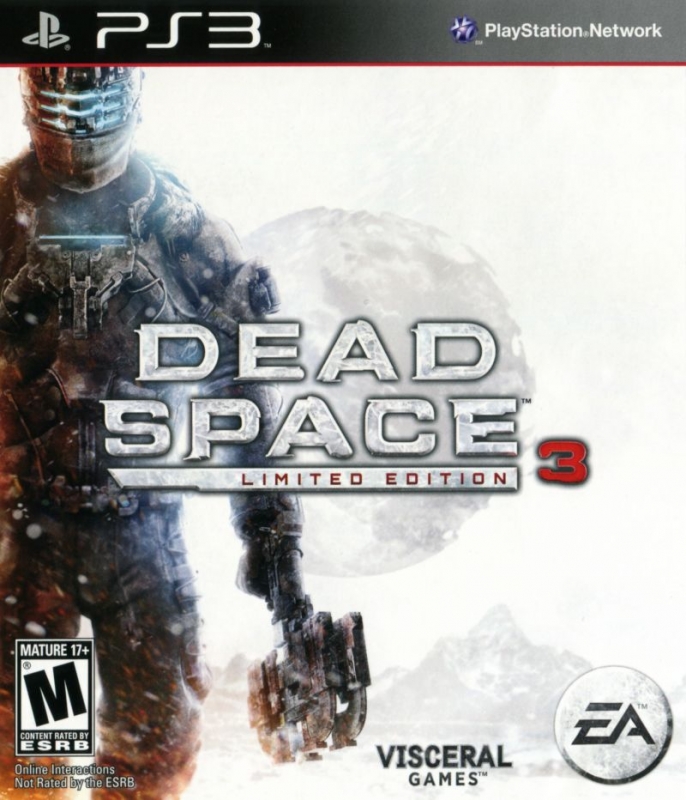 I'd kill for some Cheeky Self Awareness.

As game budgets inflate and the medium grows, it's becoming increasingly frustrating to see so few games with good writing. Granted, there are games like Portal or Uncharted, or even the flawed but interesting Heavy Rain, but for the most part it's a sea of sludge with the proverbial diamond in the rough. Dead Space as a franchise is said to have one of the better stories in recent memory, with a deep history and unique lore, but despite its commendable world building it's difficult to get past how terrible the story and characters are, and Dead Space 3 only makes matters worse. The series has become too fixated on action set pieces to make its modern horror leanings work, and both gameplay and plot suffer for this. I've enjoyed some dumb games and movies, but I've never felt like my intelligence was insulted so aggressively as when I was playing Dead Space 3.

As in the first two games, you play as Isaac Clarke, a space engineer who keeps getting in over his head in a conspiracy involving mystical alien artifacts that are turning people crazy and urging them to start a new religion that revolves around the idea of turning everyone into a space zombie known as a necromorph. This plot kind of worked in the first game where the 'religion' in question was more or less confined to the Ishimura, but once it spread to human civilization, surely it should have been eradicated. I repeat, it was a religion that revolved around the idea of killing everyone and turning them into space zombies. Are we really supposed to believe that future human civilization is capable of faster than light travel and galactic colonization, but isn't capable of destroying the so-called markers that are very clearly driving people to insanity? Are we supposed to believe that supposedly intelligent people find the idea of being turned into a necromorph in any way appealing? I've heard of some pretty weird religions throughout Earth's history, but I can't recall one that was so widespread and so very dangerous.

The very fact that every single one of these questions and many more concerning the story came to mind when playing Dead Space 3 says something about the plot. Willing suspense of disbelief can only go so far. I can imagine that Superman putting on glasses convinces people he's Clark Kent because the DC universe has traditionally been campy and not meant to be taken too seriously. I can accept the clearly evil, diabolical plots of the Umbrella Corporation because at this point Resident Evil is a parody of such exaggerated tropes, at least in my eyes. I cannot just accept that humanity has collectively devolved into a bunch of neanderthals despite mastering space travel because Dead Space 3 takes itself so seriously. At one point, when it became clear that Isaac had a new love interest, I knew exactly how it would play out, with the needless conflict and strife that would come from Isaac choosing her love over survival. Every note from every plot point is taken directly from the words of a 13 year old's Dead Space fan-fiction, and given a few extra curse words to make it seem mature. Every character in the game is unlikeable and as shallow as a street puddle on a hot summers day, and that's terrible when you're playing a game that tries hard to make you care about a romance that you know is doomed to fail.

The only interesting twist the game has to offer is unlocked when playing co-op with Isaac's partner Carver. Throughout the course of the game while playing co-op, you can go on unique team missions where Carver begins to go just as crazy as everyone else in the world. He begins to see strange things that the other player can't see and is transported to an ethereal world where he must confront his own demons while the still-sane player must fight off hordes of enemies on his own. The subtle differences between the first and second player's gameplay and story are a nice touch and show the hidden potential behind the creative team. At times I would be wowed by Carver's psychosis and devolution into madness. I was hopeful that eventually the two characters would be forced to split up and deal with these issues on their own to really hit the point home that they had descended into different levels of madness, but the two always stick together (aside from the instances of delusional spirit-walking), which is a missed opportunity.

To be honest, I spent most of the game thinking that Carver was one of Isaac's delusions. The cutscenes clearly make it look like they were scripted without his involvement, as the camera angles and focus is always on Isaac, and sometimes it looks like Carver was pasted onto the scene afterwards. The fact that most people aside from Isaac almost never talk to him doesn't help matters either. I was preparing myself to give them credit for a decent twist, but as it turns out it was just sloppy planning.

While playing in co-op, each player gets their own set of materials and items, with only key items being shared between the two of you. This causes there to be a disconnected when your partner smashes open a crate to expose some heath vials; you can still pick the item up but for you it'll be, for example, an ammo pack instead. This also means that by the end of the game you will be totally stocked up on supplies, rather than having to divide, share, and work together to survive. This is an issue directly linked to the game's dedication to action instead of survival horror.

One of the greatest things about the original Dead Space was that you played an everyman with no combat training. You were an engineer with only mining tools to aid you against the waves of enemies. In fact, the best and pretty much only way to kill them was to dismember their limbs; you had to be thoughtful, methodical, and precise while minding your ammo reserves. Dead Space 3 ruins everything that made the original special by giving you a partner and enough ammunition to sink a fleet of warships. The enemies you fight are ridiculously fast and come in large swarms, so trying to sever their limbs is a total waste of time; the best way to kill them is just to aim in their direction and shoot until a power-up pops out, indicating it's dead (again). What was once a well crafted game about isolation and the horrors of space and aliens is now just generic third person shooter #32.

The single gameplay improvement Dead Space 3 makes to the series is that this time around you can craft your own weapons and supplies from the ground up, or modify existing ones to your liking. When making a weapon, you decide what frame to use, what primary and secondary fire to have, what shooting style you want, what mods you want, and what stat upgrades to give it. It's a little confusing to pick up at first, but proves to be an excellent way to customize the experience. The upshot of this is that the everyman motif is gone in lieu of a weapon that has an assault rifle that coats the enemy in stasis with a rocket launcher strapped to the bottom that douses them in acid. Once you unlock the explosion protection perk, there's really no reason not to just use grenade launchers and rocket launchers to make mincemeat of everything that stands in your way, up to and including bosses.

The crafting system applies to everything in your inventory. Instead of finding credits to use at a shop, you find different elements that each make their own items, and everything is crafted at the work benches that are scattered about. Somatic Gel makes health packs, Transducers make stasis packs, and scrap metal makes ammo cartridges that can be used on all weapons (another reason to never worry about ammo - one kind of ammo fits all weapon types). These different materials can also be mixed and matched to upgrade your rig or make special items. Once you get to the end of the game, you have so much in the way of health, ammo, and beefed up weapons that any semblance of horror is lost, save the infuriatingly cheap instant-death attacks of some enemies and environmental hazards.

Bringing all of that together, you might think that Dead Space 3 sounds like a great action game. Unfortunately, the controls are just too sluggish to keep up with the frenzied action. Your aiming is imprecise and rarely enough to stop a super-fast enemy that's coming right for you, your character moves and turns too slowly, the dodge roll is hard to utilize properly and pretty much useless, and clip sizes are so small you have to reload every few seconds as a dozen more red-eyed skeletons attack you all at once. These control limitations would work well in a survival horror game, but this is emphatically not survival horror; even the blizzards that are supposed to convey a sense of claustrophobia on the planet's surface allow you to see enemies coming with plenty of time to blow them up. And the fact that you spend a lot of the game completing fetch quests and backtracking is perplexing given that you supposedly have a whole planet to explore.

There are also a number of technical issues that make Dead Space 3 feel like a hastily strewn together game that exists solely to allow EA to financially capitalize on what was once a promising series. Body parts dance around rooms like they're marionettes controlled by a puppet master in the midst of a seizure, enemies appear and disappear without warning, and the game is prone to freezing (it froze on me more in 12 hours than Skyrim did in over 350). I also fell through the scenery of levels multiple times, and there was even one instance of an enemy model standing straight up with its arms out as if it was posing for a graphic design slideshow. Finally, every elevator or large door is a poorly-hidden loading screen that takes entirely too long to get through, and there are entirely too many of them.

I'd love to pretend I'm just some nitpicking hack who doesn't like change in a series, but I'm the guy who felt Resident Evils 4 and 5 were better than 1-3, because at least they knew they were silly and functioned as good action games. There are some great ideas on show, such as item crafting, weapon creation, and the ethereal co-op story segments, but there are just too many false steps and wrong turns that make this by far the worst entry in the series. Its schizophrenic inability to choose which genre it really wants to be means it fails at both. I can't recommend Dead Space 3 to anyone, really; our medium deserves better than this.

This review is based on a retail copy of Dead Space 3 for PlayStation 3.