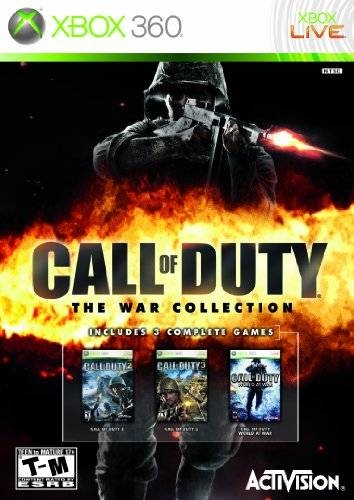 Call Of Duty: The War Collection is a compilation pack that includes three games: Call of Duty 2, Call of Duty 3 and Call of Duty: World at War. Call of Duty 2 lets players experience four individual soldier stories as they overcome insurmountable odds in multiple campaigns. Players have the freedom to follow each of the four storylines through for the ultimate character-driven experience, or they can engage in the historic battles chronologically for quick hitting action. Along with the new missions, the game features an enhanced engine, advanced AI, and even more authenticity than before. Through the eyes of four Allied soldiers, Call of Duty 3 brings players closer than ever to the fury of combat as they fight through the Normandy Breakout, the harrowing offensive that liberated Paris and changed the fate of the world. Call of Duty: World at War throws out the rulebook of war to transform WWII combat through a new enemy, new tactics and an uncensored experience of the climatic battles that gripped a generation. As U.S. Marines and Russian soldiers, players will employ new features like cooperative gameplay, and weapons such as the flamethrower in the most chaotic and cinematically intense experience to date.