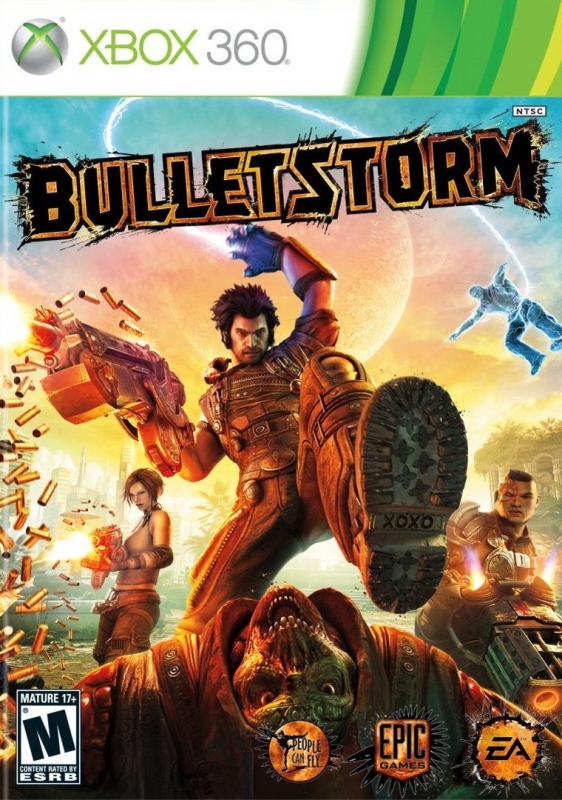 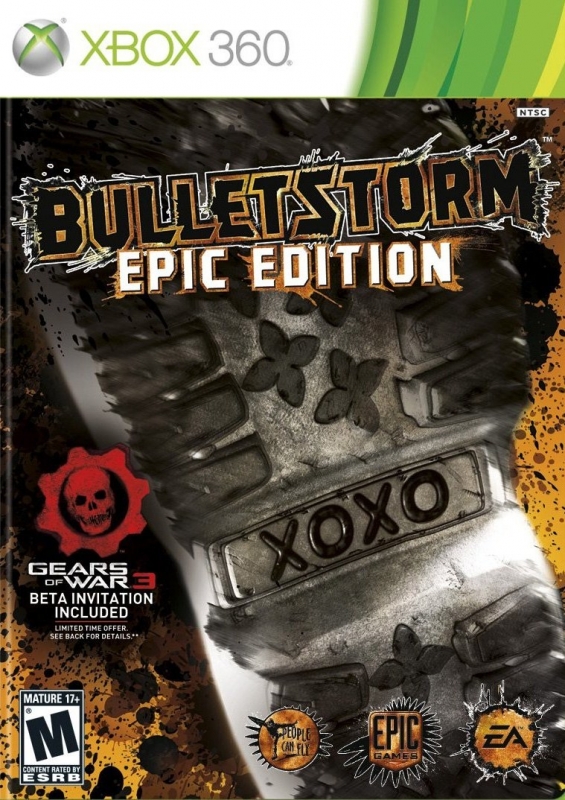 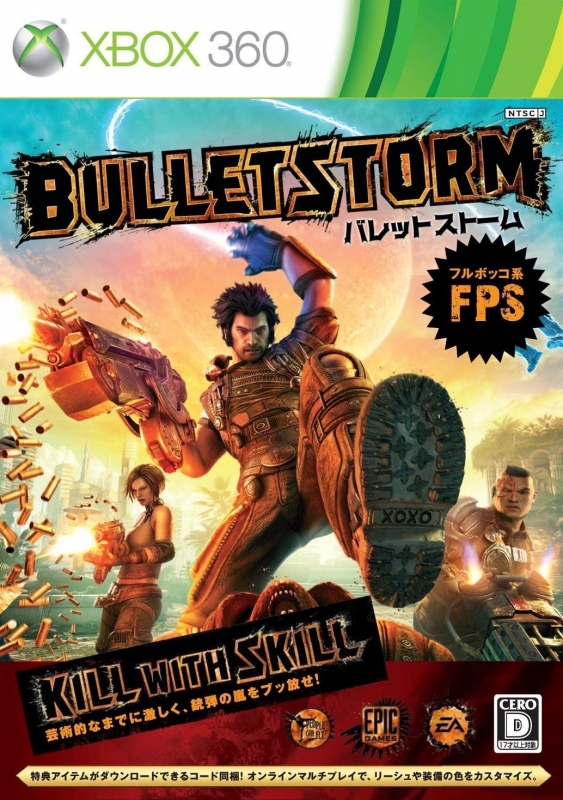 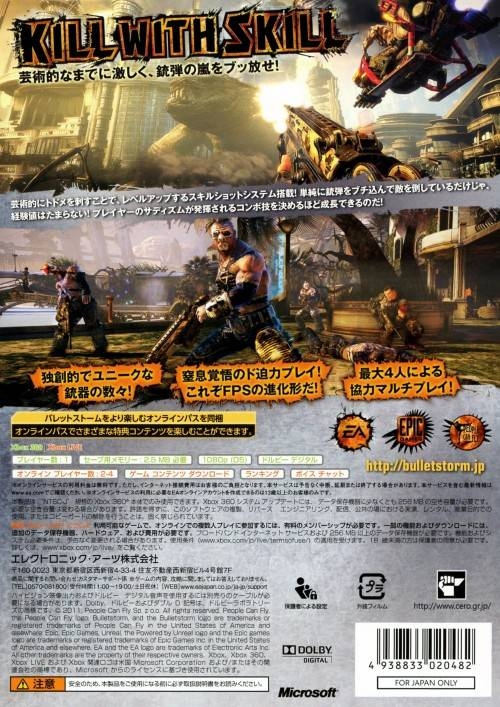 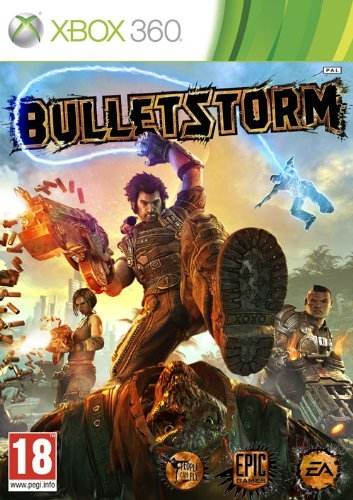 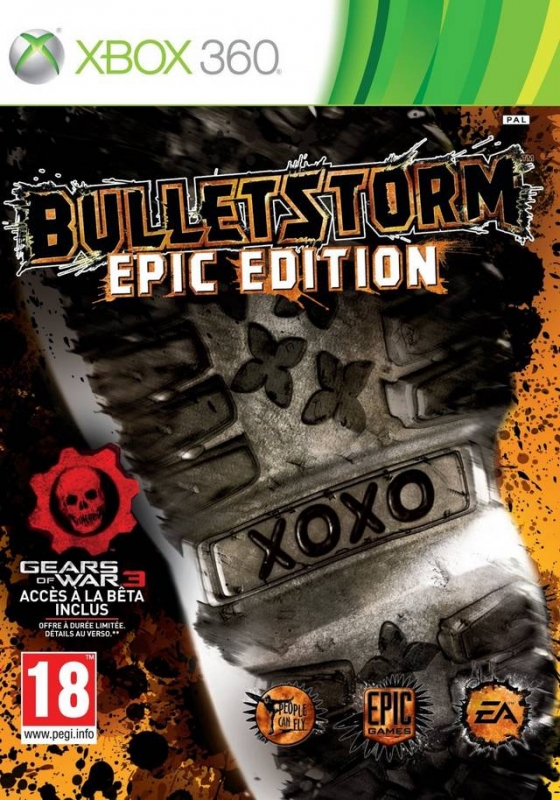 Modern shooter games have been traveling the path of serious, developed stories for several years now. A man and his gun is a vehicle for a great character in some complex situations, showing great human growth over the course of eight or ten hours. Bulletstorm isn’t that kind of game. There’s a story. There’s even some mild character growth. Really, this game is about racking up the high score while blowing a planet full of mutants back to the hell it crawled out of. Bulletstorm from EA, Epic Games, and People Can Fly (a subsidiary of Epic), puts you in the shoes of a space pirate named Grayson Hunt who is an ex-special ops agent from a team called Dead Echo. Grayson has a serious hard-on for revenge against his former general and spends the whole game hunting after him while trying to survive the horrors of the planet Stygia, a former resort planet gone horribly wrong.Bulletstorm looks brilliant, which isn’t surprising from the studio that brought us Gears of War, they’ve been around the block with a marquee titles. Stygia is bright and lush with some truly enormous vistas and areas to fight in. The design of the mutants you fight reminds me in many ways of the human enemies you face in Borderlands with their tribal attire and similar attack styles.So the game is pretty, that is until you wreak 39 different flavors of havoc on it. If Bulletstorm were a film, only Michael Bay could direct it. The story is okay, but the special effects are out of this world. Explosions send enemies (or parts of enemies) flying in all directions. The thumper sends them skyward in a brilliant burst of bullet-time, and there’s really nothing like unleashing a four-barrel shotgun in the exposed southern region of a miniboss. Sound design is spot-on as well. The soundtrack blends into the game seamlessly and unobtrusively, rising to the occasion when the game tries for some emotion. Explosions and gunfire fill your speakers constantly and the voicing is superb. The general is a send-up of R. Lee Ermey’s Sgt. Hartmann from "Full Metal Jacket" (who actually did some promo videos for the game) and well-known voice actor Steve Blum voices Grayson Hunt. Even the enemies have great non-verbals. My favorite is the sound enemies make when they die a particularly excruciating death. That brings me to an important point with Bulletstorm. This game is rated M and it is very mature indeed. This game isn’t for the light-hearted or those who don’t like some ridiculous violence in their game. Bulletstorm also features dialog that would make Quentin Tarantino blush. If you’re reading this review to decide if you should give in to your kid’s begging for Bulletstorm; tell little Timmy no.Bulletstorm does have a narrative, but one that has trouble reconciling the attempt at a redemption story with the over-the-top gameplay and dialog. A cutscene will get into some emotional moments, hinting that Grayson is growing. Then you’re back in the action with Grayson throwing out numerous expletives and zero remorse for his actions. It’s like Grayson Hunt is trying to be Nathan Drake and Duke Nukem at the same time. You can be one or the other, not both. As a shooter, Bulletstorm is nearly perfect. Controls are tight and very adjustable to the players’ preferences. Enemy AI is a bit dumb and Grayson can take more damage without dying than most other first-person-shooter (FPS) heroes, but that’s only fitting given the point isn’t to kill quickly but to kill with panache and variety. The single-player campaign has literally hundreds of different skillshots depending on the weapon you’re using, the enemies you’re facing, and environmental hazards you take advantage of. There are even more when you get into multiplayer and start teaming up for more skillshots.Admittedly, the skillshot system is refreshing at first but can become repetitive. Most skillshots involve some combination of slide-kick-leash-shoot, and really the challenge of the game becomes finding unique ways to kill enemies that you haven’t used before. Skillshots are always worth more the first time you use them and big scores come from stacking skillshots. Drink a bottle of Nom Juice (Intoxicated +100), catch multiple enemies in a single explosion (Gang Bang +50), or blowing up a toxic plant that catches you (Toxic +50) or your enemies (Antidote +50) in a poisonous cloud can really build your score. Once you’re most of the way through the game, though, you tend to use the same combos over and over again.Bulletstorm has some refreshing breaks from the skillshot parade, though. Using a remote control to wield a giant Godzilla-like machine is one of the highlights of the whole game. There are also some challenging on-rails sections that keep things interesting. Of course, the real break from the formula comes when you get away from the single player campaign altogether.Bulletstorm has two game modes outside the campaign: Echos and Anarchy. Echos are pretty familiar to most people since the demo was one of the early Echos levels. These are small snippets of the single-player campaign, sans story. The goal is to get the highest score possible. They are infinitely replayable and each has its own leaderboard as well as contributing to an overall leaderboard. The demo level alone saw more that 1000 hours of play by some devout gamers. Anarchy is the online multiplayer component. Groups of up to four players are confronted with consecutive waves of enemies with a score goal that must be met or surpassed in order to proceed to the next wave. These are all about teamwork. Killing a boss by yourself will net you 200 points, but if the team kills the boss together, each person gets 200 points, putting 800 points toward the score goal. Anarchy becomes a frenetic game of setting them up and knocking them down.This is where the alternate modes end, though. While Echos and Anarchy can give you hours and hours of enjoyment, those are the only options. On the one hand, I’m disappointed. There is no local split-screen option. That’s a big peeve I have with many modern shooters. On the other hand, the game wouldn’t work with any sort of competitive multiplayer like deathmatch (outside of leaderboards, which Bulletstorm has in spades). Since so much of the gameplay relies on sliding, leashing, and kicking which put your enemies in slow-motion and flinging them all over the arena, deathmatch would mean you wouldn’t really feel like you’re in control of your character. So no deathmatch? Okay. No splitscreen? Not okay.Don’t’ get me wrong, though. Unlike the one-trick-pony multiplayer that Dead Space 2 featured, Bulletstorm’s Anarchy mode will eat up hours at a time with a huge grin on your face. I’ve played my share of Halo and Call of Duty online, but Bulletstorm is far and away the most fun I’ve had with an online shooter… or maybe tied with Halo: Reach’s Rocketfight variant. Bulletstorm definitely gives a gamer his/her money’s worth. 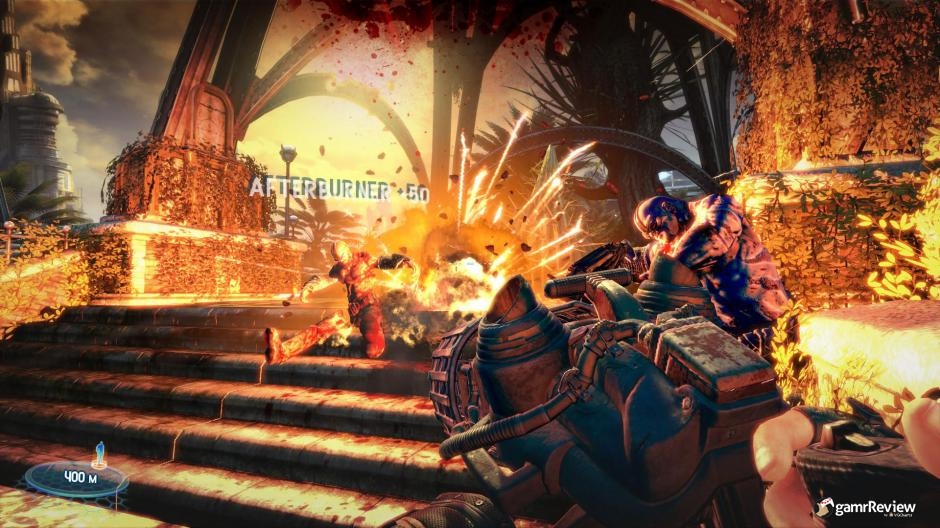 Bulletstorm isn’t an emotional shooter, it’s not trying for any best story awards. Bulletstorm is a game in every sense of the word. We consider ourselves gamers but we play RPGs and games like Heavy Rain that are more about the experience than anything else. Bulletstorm is an unabashed game in the same sense as Bejeweled or Rock Band. Honing your skills and rising up the leaderboards means more than what happens to the characters at the end of the day. It harkens back to a time when games were just games and the mechanics were simpler, but still has the high production quality and tight controls gaming’s innovations have brought.Call me nostalgic or just call me a 30-year old gamer, but Bulletstorm’s blend of the old with the new is something entirely refreshing… and great.