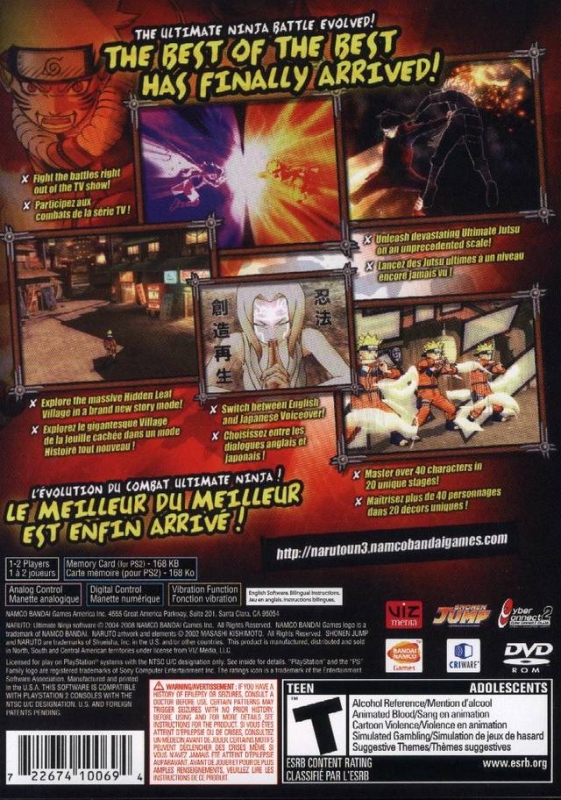 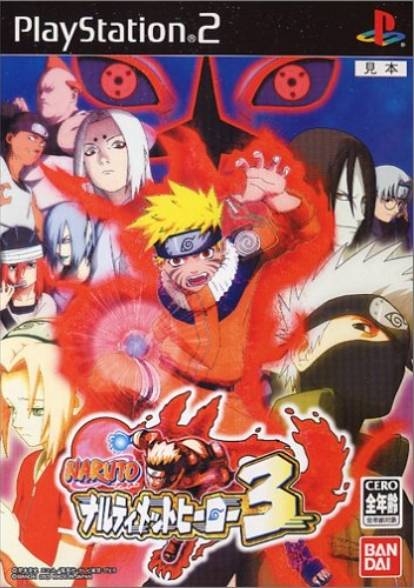 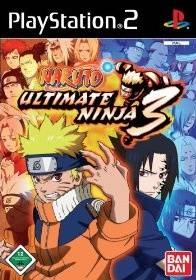 As the latest and most advanced of the best fighting game series based on the Naruto Universe, Ultimate Ninja 3 perfects everything we have come to expect from the series and evolves it to the next level with major innovative features. Choose from over 40 of the most loved and feared characters from the entire Story Arc 1 to battle the best in the world of Naruto over 20 unique stages. Customize your character with the Ultimate Jutsu of your choice! Unleash your favorite characters’ Ultimate Jutsu beyond traditional multi-level super attacks to dominate your opponent. For the first time in the series, you will be able to turn some of your favorite characters into more powerful ninja warriors and summon giant creatures as allies! Relive the major events that define and conclude the entire Story Arc 1 in Hero’s History Mode in both English and original Japanese VO. This is the best of the series.

Battle As Your Favorite Ninja – Play as one of over 40 playable characters from the hit TV show including Naruto, Sasuke, Itachi, The Hokages, The Sound Ninja 4 and many more.
Unleash Powerful Ultimate Jutsu – Customize your favorite characters with Ultimate Jutsu of your choice. Now, you can turn some of your favorite characters into more powerful ninja warriors and summon giant creatures as allies!
Experience the Original Japanese VO – Now, you can choose between English and Japanese voiceover!
Engage in Brand New Summoning Mode – Turn your characters into giants of unprecedented size or summon giant creatures to control in battle. Remember, if you want to unleash the giant creatures, you should be ready to fight them as well!
Upgrade Your Character – Upgrade your characters' strength, defense, chakra, agility and even special abilities.
Live a Brand New Original Naruto Story – Experience an original storyline exclusive to the game. Explore the massive 3D rendered Hidden Leaf Village, engage in all out battle royale matches, interact with residents in the village and accomplish over 55 missions in "Ultimate Contest" mode.
Tons of Combat Variety – Battle in 20 unique stages using either close combat or a variety of ranged weapons.  You can call on support characters to help with super attacks or drop off power-ups.
Live through the Entire TV season 1 through 3 – Be an active part of the major events that define and conclude the entire Story Arc 1 in Hero's History mode. Relive your favorite scenes of the series as the two heroes clash in the battle of destiny!
...and much more! – Tons of replay value with unlockable features such as playable characters, movies, music, cards, etc.