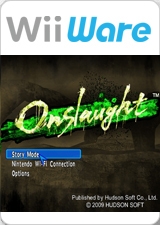 Get ready for Onslaught; the first First Person Shooter ever for the WiiWare™ platform! With tight controls, a horde of enemies to blast away, and some of the most intense action you’ll ever find, Onslaught sets a new standard for FPS on Wii™.

In the distant future, contact with a distant research colony is lost and your team is sent in to find out what happened. Upon arrival, you’re attacked by overwhelming numbers of mysterious creatures. It’s up to you and your squad to eliminate the threat and discover the truth that lies deep inside the colony.

Being the first FPS on WiiWare, Onslaught gives shooter fans the action you’ve been waiting for. Taking advantage of the precise motion controls of the Wii Remote™, you’ll be in full command of your soldier as you tread through treacherous terrain. The action stays tight by aiming with the Wii Remote. You'll need steady hands if you're going to survive the horrors that await. When running low on ammo, give the Wii Remote a shake to get back in the game. When the odds get overwhelming, a supply of grenades will keep enemies at bay by throwing them using the Nunchuk™. Get set to play an FPS unlike any you’ve ever played before!

The enemies of Onslaught are no pushovers, which is why you may need to team up with a friend, or two, maybe even three! Get online and play in 4-person co-op to increase your chances of survival!

Anyway you look at it, Onslaught delivers. Get ready for a new standard of FPS action with Onslaught, coming for WiiWare.