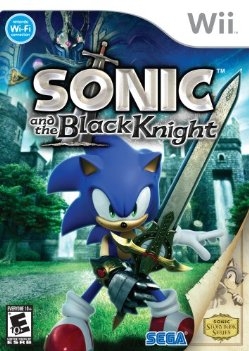 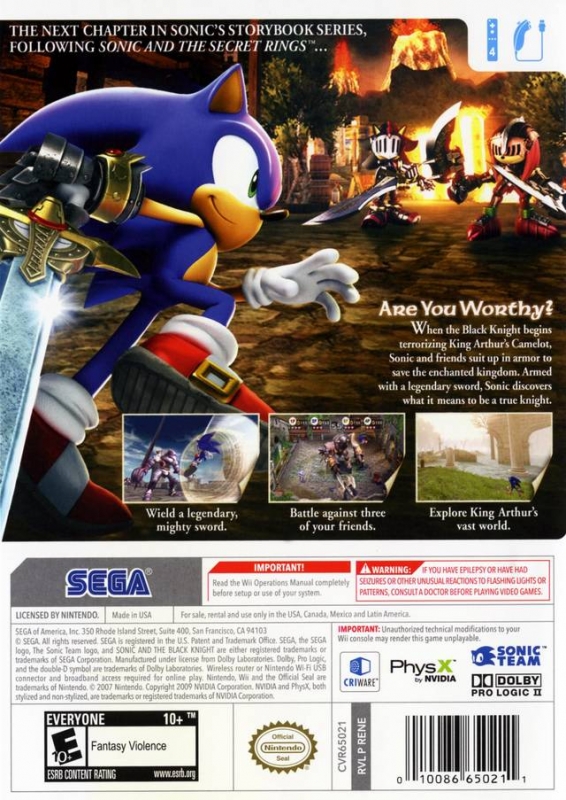 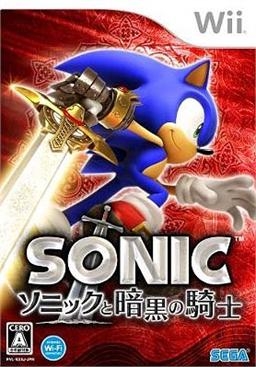 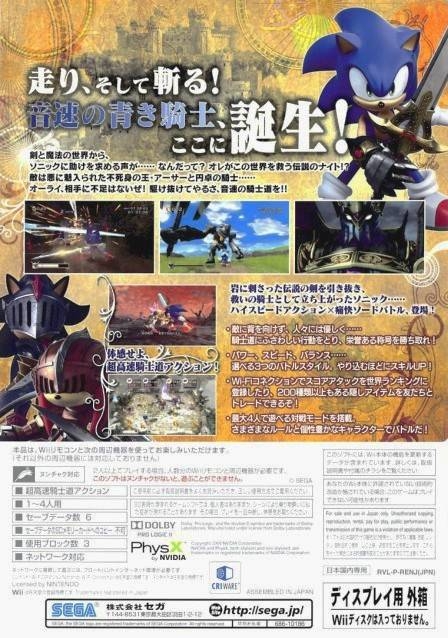 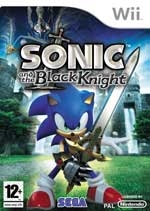 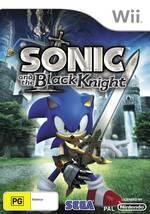 Sonic and his Talking Sword

Sonic and the Black Knight is the most recent Sonic game to come out of Sega.  The hedgehog has to dispatch enemies with his trusty, talking sword in this take on a classic story.

This game's story kicks off with Sonic being summoned by a wizard who is in need of assistance.  The game's opening CG cutscene is very beautiful with great attention to detail and animation.  Spoilers ahead.

The next type of cutscenes are the animated types that look very good as well.

The drawings are very well done with a unique style that harkens back to the point of time which the game takes place in.  The menus throughout the game are very stylized and easy to navigate.  The music for this title has to be some of the best I've heard from the Sonic series, and the voice acting is very good too. 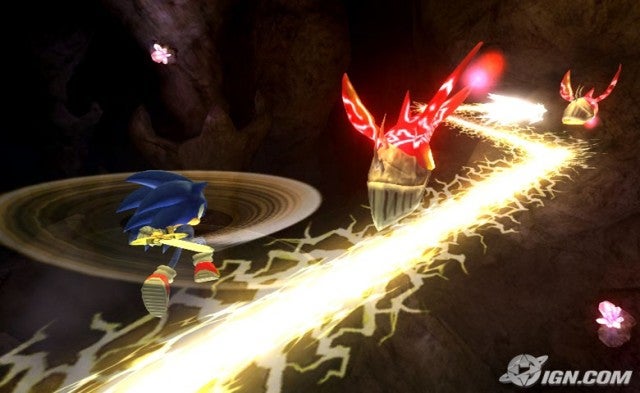 The game's graphics are very pretty with some amazing artwork and very detailed textures.  Overall, this game has very good presentation and is pleasing on the eyes but there are framerate drops here and there when too mamy enemies are on screen.

The level design is terrible.  The levels look good, but all that takes place in them is running straight with the occasional bits of velocity and watching Sonic fly.  There is a bit of jumping on the side.  The gameplay is very simple for the most part.  Get to the end of the stage while completing the task at hand.  The main story mode will take you through most of the missions where only getting to the goal is necessary.  As you progress, you level up Sonic and his sword and unlock new skills which is dependant on the number of followers you earn which is also directly related to your score.  Keeping your hit counter up on enemies is important to maintaing a good score.  Also, Sonic has three different styles.  The Knight style is the basic style that's more suited to the beginner and has decent speed with nice power and is marked with a golden sword during gameplay.  Cavalier style is the speed style which gives you the most speed at the expense of power and is marked a blue, windy effect on your sword during battle.  Paladin style is the style that gives you more power and range on your attacks at the expense of speed and is marked with a red sword during battle.

The meat of the game is usually choosing to deal with enemies or avoiding them and making it to the end of the level.  The AI in this game seems a bit off so if you shorthop (tap of the A button) on the side of an enemy, it will just turn and look at you.

All enemies in this game are passable by doing just that except for the huge armor enemies unless you are Sonic using the Cavalier style leveled-up all the way.  You are forced to fight these because they will grab you if you try to pass.

The controls for this title are both good and bad.  You move Sonic using the control stick which is a great improvment over Sonic and the Secret Rings's approach to controling Sonic in my opinion.  The A button is used to jump, and there is no charge jumping this time around.  The height of your jump is affected by how long the A button is held.  A tap makes Sonic shorthop and a longer button press gives Sonic a full jump.

The most simple method of attacking is usually just a simple swing of your Wii remote.  Here is where the problems come in.  First of all, there is a delay of times before the swing and what appears on screen.  Secondly, the controls can be a bit unresponsive at times causing swings not to come out at all.  Lastly, Sonic has many attacks that are not outlined anywhere in the game at all unless the hint movies are watched in the gallery.  Sonic's normal sword swing does have a little depth to it though.  Swinging while idle gives Sonic some very short and near useless attacks that aren't worth doing.  Swinging while running gives Sonic a running attack that has a total of three swing with two different phases.  The first two attacks autocancel with striking an enemy or a breakable item such as a rock.  If a running attack is timed right, you can slice whatever is in your way and continue to run with only a little pause  between the swing and taking off again.  Once running your speed should be the same as when you were running before the attack.  The last phase of the attack will cause Sonic to jump into the sky which you can follow up with a swing of your sword to perform the homing attack which is outlined later.

The next main method is attacking is soul surge.  Once this ability is unlocked, a meter will appear in the bottom-left corner of the screen,  When it fills past a certain point, Sonic will be able to use his special attack.

Pressing the B button will force Sonic to get in position as shown above.  A target will form around the nearest enemy and a swing of the wii remote will fling Sonic at that enemy for a one-hit kill.  It sounds simple in theory, but there is more to it.  Sonic is only character that can perform this move from two different positions, from the air and the ground.  Also, if you wait for the target or your sword to light up before swinging you will then score a perfect hit which conserves your soul gauge and earns you extra points.  Doing soul surge while on the ground grants you invinciblity and you can dash if there is nothing around to target.  Soul surge in the air gives you more speed and less windup on consecutive attacks.

The more minor methods of attacks should only be used in special situations.  The homing attack is performed by pressing the A button while air borne like any other 3D Sonic game.  The problem here is that it does not hurt enemies unless used in a specific type of mission.  The sword must be used to do that.  Before it reaches an enemy you can either cancel it by pressing A again, use soul surge by pressing B, or you can swing your sword and if timed right Sonic will automatically carry himself through all enemies that are reachable.  This attack is most useful for taking out large amount of enemies that are in clustered groups or are in a line.  If the homing attack bounces off of an enemy you can only swing the wii remote to attack it or do nothing to let Sonic return to the ground.

Two more useful techniques are the lunge attack and the reverse aerial attack and each chacater has their own variation of this attack.  The reverse aerial attack is performed by tapping in the opposite direction that Sonic is facing in and shaking the wii remote.  Sonic does a neat, counterclockwise spin which covers your behind, above, and below you and it deals six consecutive hits depending on the level your sword is currently at.

The gameplay is sort of robust, but most won't really know about any of the game's combat system or inner workings because no hints or anything of the sort is given about these techniques.  They can be seen being abused by the development team in the gallery videos, but there are no hints in game.  One more method of attack is the kick.  Activating soul surge and shaking the nunchuck allows you to kick an enemy which is completly useless unless being used on a spider or you can kick the blue balls that occasionally show up.  This is the only special technique that's remotly hinted at in the entire game.

The boss battles are very easy and only last a few seconds.  There are not much to these except avoid said obstacle and swing when an on-screen prompt comes up.  The duels are a little bit more difficult, but the combo outlined above will get you through those no problem.

There is only one way to defend yourself and that is with the sheild.  Pressing the Z button makes a sheild form in front of your character.  Sheilding at the right time earns you some soul gauge.

The multiplayer is more worse than Sonic and the Secret Rings's party mode.  You and three other people can compete in arena type battle modes where you can defeat some enemies or fight yourselves.  The controls are worse here than in the main game.  Movement on the characters are slower and worse.

The game's main story is very short.  The story mode is only about six hours in length and can be completed in under an hour if you know what you are doing, but the game has much replay value.  There are hundreds of followers to collect in each mission and collecting them all will take quite a while.  There are hundreds of gallery items and general items to collect and the game has leaderbords for some select missions.  Collecting all followers is what unlocks special abilities for Sonic such as the Crest of Wind and Crest of Fire which are similar to the abilities in Sonic and the Secret Rings.  Other characters are leveled-up by sword alone.  In summary, the story mode is short but the game has much to do if you feel like going through it.

Overall, Sonic and the Black Knight is game held back by bad level design and controls.  The gameplay isn't there, but everything else was crafted with care.  It's as if more went into the less important things besides the gameplay itself.  Sonic with a sword could have worked well if done right, but this seems to be another gimmick that Sonic Team could not handle.