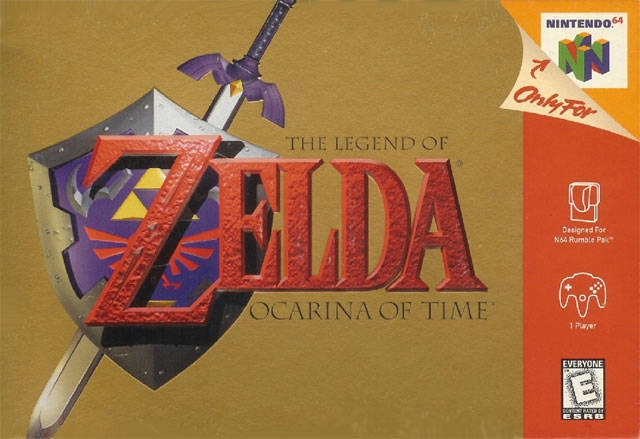 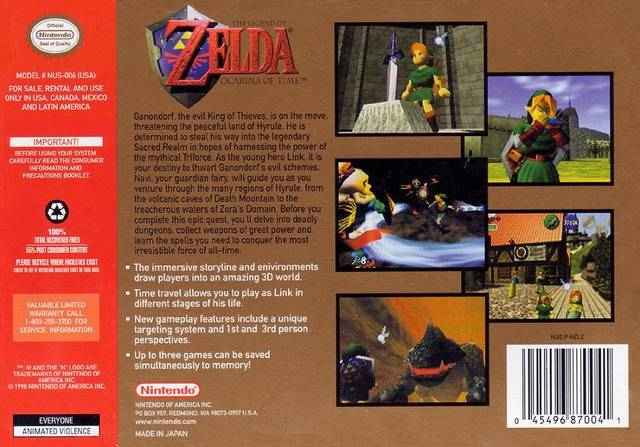 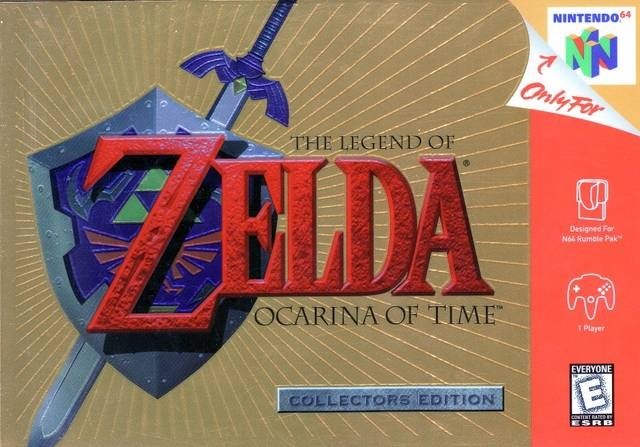 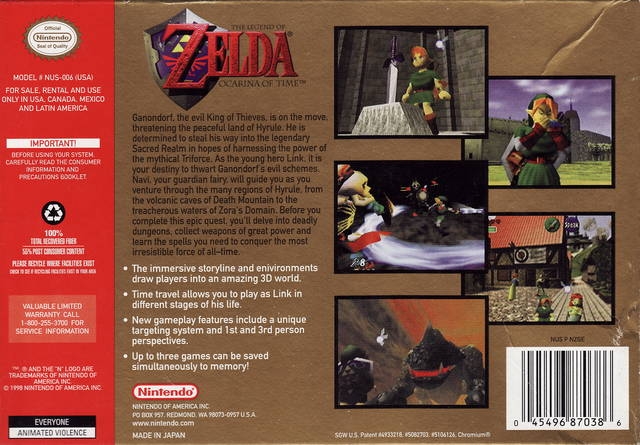 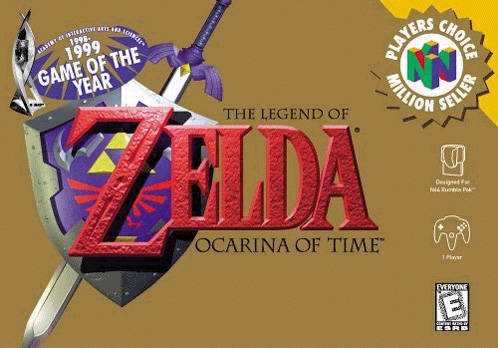 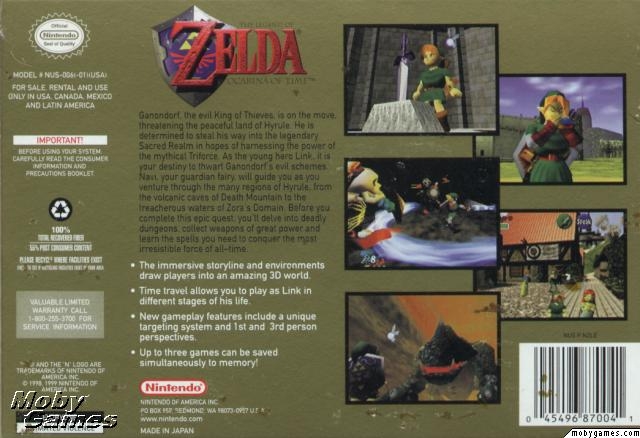 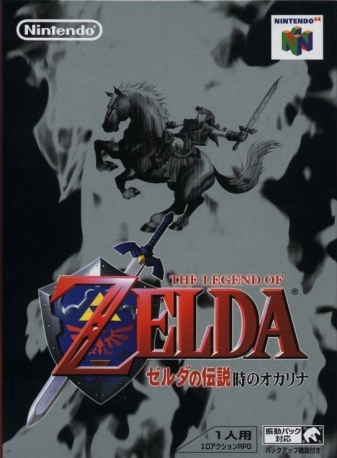 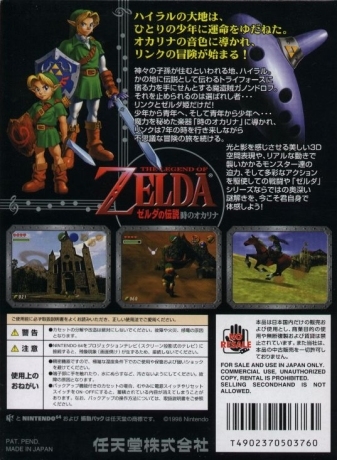 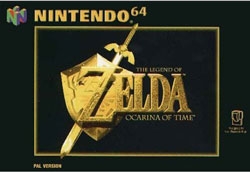 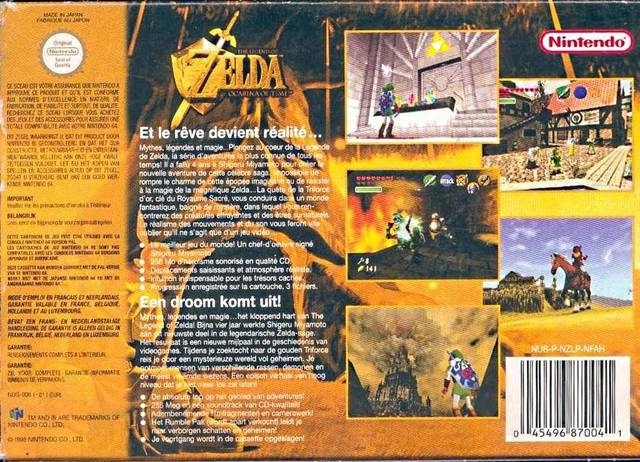 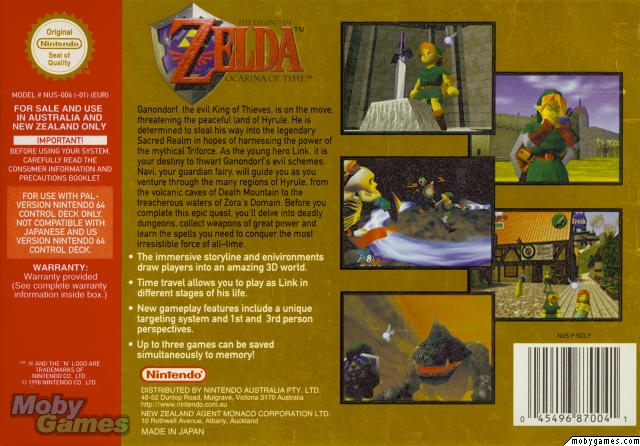 The Legend of Zelda: Ocarina of Time (N64)

A dark time is approaching in Hyrule. The storm clouds of evil are gathering over the land, and malevolent forces are poised to strike at the most sacred and powerful artifact of all, the mysterious Triforce. The only thing standing between chaos and destruction are two youths, an elfin boy from the magical Kokiri Forest, and the young princess of legend, Zelda. Do you have what it takes to guide the intrepid hero, Link, from his secluded forest home to the final confrontation with the ultimate evil force?

The Legend of Zelda: Ocarina of Time reveals the genesis of the fantasy land of Hyrule, the origin of the Triforce, and tells the tale of the first exploits of the heroic adventurer Link and the Princess of legend, Zelda. Like the previous games in the series, The Legend of Zelda: Ocarina of Time has taken its place in the realm of video game legends, with immersive graphics, sweeping storyline, swashbuckling adventure, mind-bending puzzles, and just a dash of humor.

The Legend of Zelda: Ocarina of Time transports you into the fantasy world of Hyrule with vibrant, real-time 3-D graphics. With full freedom of movement, your quest takes you through dense forests and across wind-whipped deserts. You swim raging rivers. Climb treacherous mountains. Dash on horseback across rolling hills. And when you reach your destination, you delve into dungeons full of creatures that fight to the finish to put an end to your adventures, and your life.

As you venture through the many locales of Hyrule, an epic story unfolds. An evil being of immense power covets the sacred relic that will give him ultimate might, the Triforce. You must race against time to find the keys to the legendary Sacred Realm where the Triforce is kept. Fail, and the fair land of Hyrule and all its peoples will fall into a dark age of destruction. Your adventure spans even time itself as Link must venture back and forth between two ages to completely foil the evil plot that threatens his world. It is a quest so epic, it takes many, many hours of adventure to complete.

But while there are legions of monsters to be slain, the forces of evil cannot be thwarted with force of arms alone. No, a true hero must possess wisdom in addition to courage. Within the depths of a dozen dungeons, puzzles as perplexing as they are deadly must be solved to win weapons and devices necessary to complete your quest.

You will not be totally alone in your fight. Throughout your travels, you will encounter folk who thirst for justice and will offer you aid. Speak to everyone you meet for you never can tell who might possess a pearl of wisdom that will be the key to unlocking some great mystery.

The Legend of Zelda: Ocarina of Time is one of Nintendo's most epic challenges ever. With 256 Megabits of action, this is one game that you won't finish overnight.

Originally released on the Nintendo 64, The Legend of Zelda: Ocarina of Time was re-released for Nintendo GameCube as part of a special pre-sell offer for The Legend of Zelda: The Wind Waker. This special disk also contained the Master Quest version of the game with even more challenging dungeons.