Watch Dogs is a series that has never really found its footing. From a widely panned first game that was roundly mocked for its sheer amount of angst, to a sequel that overcorrected so hard that it started featuring memes and pink graffiti in the same title as gritty death scenes resulting from gang conflicts, it’s safe to say that Watch Dogs has struggled to really find its niche. Watch Dogs: Legion is Ubisoft’s third attempt to make the open world/hacking combination work, and despite containing a few interesting ideas, it falls flat just as quickly as the others. 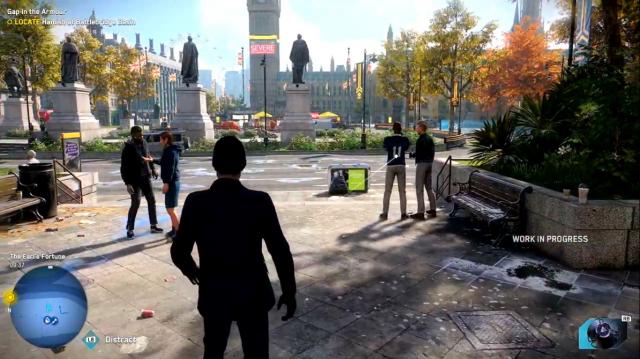 With the exception of carrying over a few names from past titles, Watch Dogs: Legion has an entirely separate and distinct story from its predecessors. In an alternate version of London where everyone speaks with an absurd British accent that sounds like it was taken from a Monty Python film, the hacker group Deadsec gets framed for terrorist attacks on the city. Several months later, London has been transformed into a police state under the control of Albion, a private military company. It's up to the player controlling a variety of randomized characters to investigate what happened, clear Dedsec’s name, and rescue London from its new overlords.

If you’re familiar at all with either of the prior two Watch Dogs games, then you’ve already got a pretty good grasp of how Legion plays. The game consists of an open world map peppered with various areas that the governing authorities would rather you not be in, and your responsibility is to consistently flaunt the police, trespass onto government property, and “hack” whatever is necessary to advance the plot. Sometimes this means breaking into a police station, sometimes a data storage facility, and sometimes a propaganda center, but regardless of where the setting is, the broad strokes are the same. You’re given a target location to go hack something, you navigate through the open world to get there, take out whatever guards stand between you and the item in question, and then press the hack button. 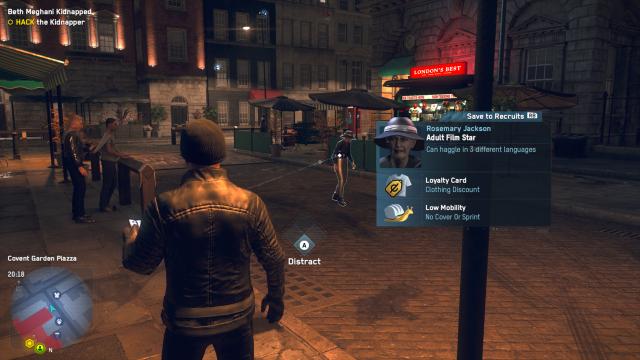 If it sounds like this is simplifying things a bit, it’s probably because there isn’t really much substance to the experience. The biggest struggle for Legion, and the Watch Dogs series as a whole, has always been its inability to focus on one or two core gameplay mechanics. As a result, Legion, like its predecessors, is a jack of all trades, but a master of none.

The open world doesn’t serve much purpose beyond forcing you to drive for several minutes every time you have to travel to a new segment of the map you haven’t visited yet. For as unpolished as Chicago and San Francisco were in the past two games, there was at least the potential for excitement along the way. Despite being in a supposed police state, you can steal someone’s car in open view of everyone and then drive down the street racking up civilian casualties without raising so much as an eyebrow from the authorities. And even on the rare occasions when you do manage to grab Albion’s attention, you can usually just drive ten or so blocks in any direction and they’ll stop pursuing you. Without the potential for trouble, the open world doesn’t do much besides connect one mission to another. 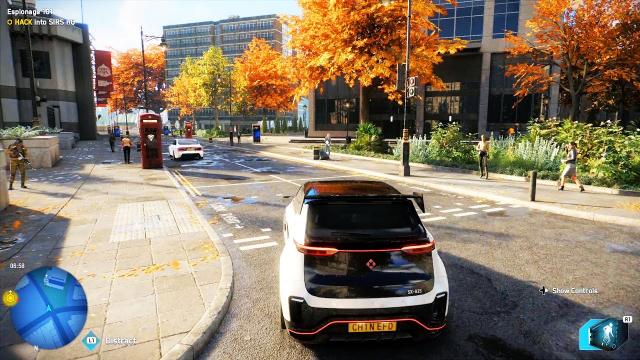 And the missions themselves don’t offer much in the way of challenge or substance either. You can unlock a controllable drone at the start of the game that is much smaller and more nimble than your character, can permanently incapacitate enemies, and can be respawned infinitely (albeit on a cooldown timer). In essence, you’re presented with a tool at the very start of the game that removes any need for you to ever put your character in harm’s way. And that probably isn’t even the most overpowered tool you’ll eventually end up getting access to.

Even if you do decide to intentionally forego most of your gadgets in order to make the game challenging, the guard’s AI is absurdly bad. Even playing on the hardest difficulty and relying exclusively on my stealth/combat skills to get by was an absolute cakewalk. Enemies will frequently fail to alert their allies and willingly engage in slow, predictable fistfights with you despite wielding firearms. The only real danger the enemy can ever pose is overwhelming you with sheer numbers if you run through an area with no regard for stealth or self preservation. 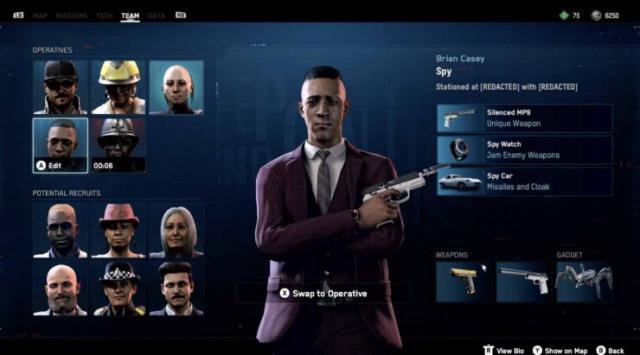 The lack of diversity on display when it comes to mission variety brings the game down as well. Virtually every mission gives you a location where some sensitive information is being stored. Your responsibility is to get to the area where the data is being stored, get by whatever enemies are guarding it, and perform a few contextual button presses to get the data. In theory, an open ended mission structure does wonders for this type of game, but in practice it just makes every encounter feel samey and tedious over time.

This may also be in part due to Legion’s biggest unique selling point, its decision to incorporate a number of randomly generated protagonists that you can swap between, rather than rely on a single main protagonist. On the one hand, after spending 30-40 hours with Aiden Pierce and Marcus Holloway in the past two games, playing as individuals that are largely just blank slates rather than absolute cretins is certainly an improvement. Conversely, however, playing as blank slates means that the player character never has any real investment in the events of the story, and without any story relevance to motivate us the game just starts to feel like busywork. 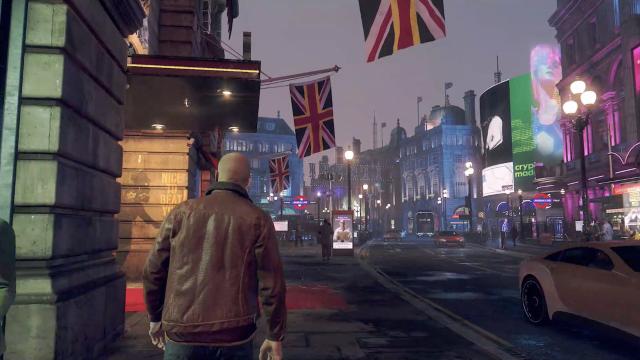 It’s unfortunate, because the idea of recruiting new members to your group is certainly intriguing. Building an ever expanding roster of characters to support your cause is a particularly interesting concept, and the notion of targeting individuals for their skills and focusing on them had real potential. This is especially the case in Legion’s permadeath mode, which adds a sense of weight to proceedings. Even if they don’t have much personality to them, it can be quite disheartening to have a character you’ve played as for a while die because of a foolish mistake.

On the other hand, the sheer ease of the game means that these moments are so rare they’re hardly worth mentioning, and in practice this feature does start to make it hard to take the game seriously. The actual process of recruiting someone involves talking to them on the street and then taking care of some side quest, and it becomes comical how nearly every single resident of London is immediately ready to join an armed resistance against the governing authorities as long you’ll help them out with some problem in their life first. Requiring the player to put a bit more effort into finding targets; having to scout out potential recruits rather than just walking up to basically anyone on the street, might have gone a long way towards making this feel a lot more rewarding and fit better with the overall narrative as well. 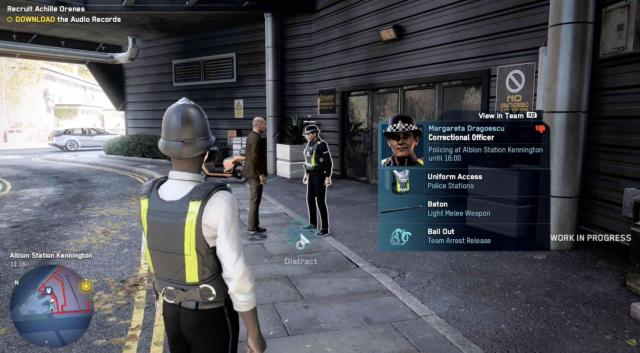 The overall tone also isn’t helped by how similarly every character plays. Despite the game’s insistence that the different characters you’ll control have important differences, they all functionally play the same but with one randomized minor distinction, like having access to a certain type of drone or gun. Beyond that, they all control the same, all deal the same amount of damage in a fight, can tank the same number of bullets, and are all weirdly immediately capable of hacking into top secret government security with seemingly no training. The grandma you picked up off the street is just as good in a fight as an ex police officer, and both are consistently better than hired private security. Doing more to make characters feel distinct, or perhaps providing some kind of character specific RPG mechanics to let them specialize, would have improved this aspect.

Aesthetically speaking, there isn’t a whole lot to say about Legion. The presentation is acceptable, and the game mostly looks fine, although the AI’s sheer stupidity will often lead to silly moments where NPCs just endlessly run into walls or get caught on lampposts. Sound design is pretty unremarkable as well; the voice acting leaves a lot to be desired and what little music is present is very forgettable. 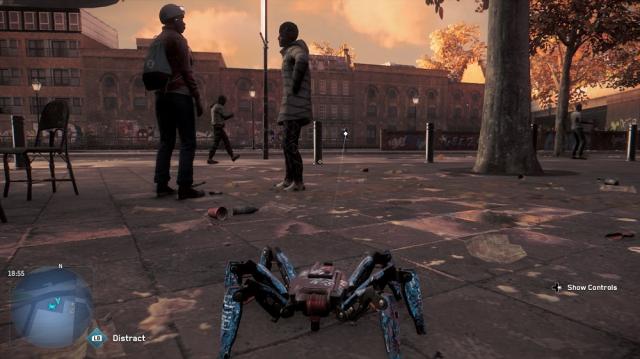 Despite showing some signs of life and having a few ideas that are interesting in concept, Watch Dogs: Legion ultimately fails to capitalize on just about anything in a meaningful way. Whatever genre this falls into, be it open world, stealth, or contextual button pressing simulator, there are plenty of games in each genre that handle their respective mechanics better, and the only way I can recommend Legion is if you’re looking for some mashup of the three that doesn’t handle any of the three particularly competently. After three games in this series, it’s pretty clear that Ubisoft doesn’t know what to do with it, and it’s probably well past time to just let it rest and move on to something else.

This review is based on a retail copy of Watch Dogs: Legion for the XOne