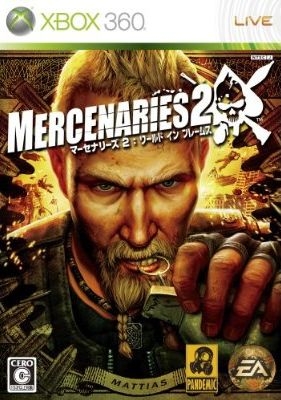 When a power-hungry tyrant messes with Venezuela's oil supply he sparks an invasion that turns the country into a warzone.

But for you, international crisis is all upside: You are a mercenary, and you profit from chaos. Mercenaries 2™ features a slew of potential clients, all willing to pay you to do their dirty work. These are world powers with deep pockets, deep grudges, and enough arms and ammo to start World War III. This is your kind of environment.

Mercenaries 2 features the latest and most dangerous in civilian and military tech, everything from shiny new sports cars, to the future-tech satellite-guided bunker-busting mini-nuke. Tanks, APCs, boats, luxury automobiles - you name it, you can have it delivered to you in real time. And if you run out of cash you can always 'acquire' the gear you need in the field.

If you see it, you can buy it, steal it, or obliterate it. Play your own way, or play with the help of a friend in the new co-op multiplayer mode.

You are not a soldier. You don't have to play by anyone's rules. You have your own code: you will fulfill the terms of the contract, no matter what. Not everyone in the world of Mercenaries is as honorable. Everyone will try and screw you, given the chance. They think they can get away with it, but they don't know rule #1 for mercenaries: EVERYBODY PAYS.


Play across cities, jungles, lakes, mountains and a range of terrain in between throughout a Venezuela that is larger than all the Mercenaries maps combined.


Whether split-screen or online you no longer have to go it alone. Invite a friend to jump in and help you fight your way to the top.


Work for the Highest Bidder


You decide which factions to work for and when. From one-off pick-up jobs to complex multi-objective missions your choices will decide how the game progresses and which faction wins the war.


Over 130 vehicles from civilian cars to tanks and choppers plus all the destructive weaponry you can handle from pistols to rocket launchers.


Take down any building in the world piece by piece and see them crumble with fantastic effects. Not just cool to look at, destruction can be used to take out enemy forces and change the landscape of the battlefield.


Build Your Own Private Military Company


Recruit other mercenaries to build out your arsenal and options until you have the ultimate array of options to play with.


Fly over it, swim through it, race across it in boats. No longer just something to look at, water is an active part of the game.


Don't have time to make your way across the country? Go to one of your captured drop zones and instantly get transported to the next hot spot and right back into the action.