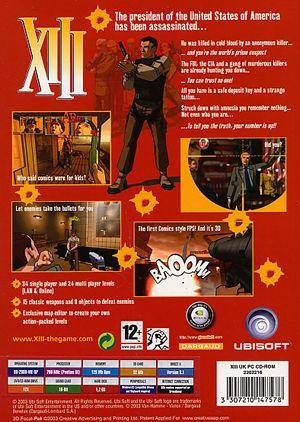 A man wakes up on a beach. He has no recollection of who he is.

Gameplay:
XIII features a conspiracy of epic proportions, and players will unravel clues behind the story's compelling and mysterious events through the game's unique flashback visuals. Are you a special-forces super soldier or just another psychopath with a gun? If you could only just remember. Feel lucky?

You wake up on a desolate strip of New England beach. The near-fatal impact of a bullet has left your head pounding, and your memory erased. What's more, the number "XIII" has been mysteriously tattooed on your chest, while your pocket holds a key to a New York City bank box.

Head swimming in amnesia, you struggle to your feet only to encounter more assailants intent on finishing the job. To your shock, you handle the hitmen with the killing skills of a professional - before heading to the bank in search of any shred of information about your lost identity and your involvement in the President's murder.

What lies ahead is a deadly quest not only into your shadowy past, but America's darkest corridors of power.
Features: