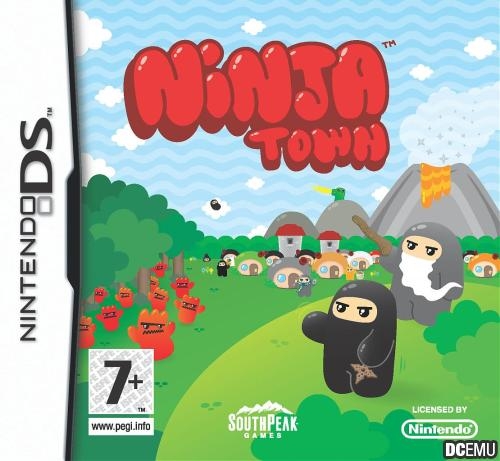 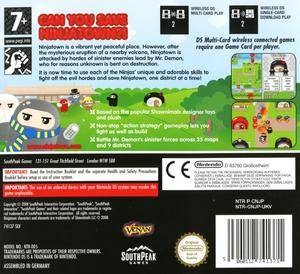 Cute, friendly ninjas and tower defence. Who could resist?

Ninjatown is a great little tower defence game that should really appeal to fans of the genre. It doesn’t really attempt to introduce any new concepts to the genre, it’s just a solid nuts and bolts affair, with a cute face and an endearing personality, and it’s well worth a look. The story revolves around the citizens of Ninjatown and their battles with an evil villain, Mr. Demon. Mr. Demon is intent on stealing the Ninja’s cookie recipe. As you can probably tell, these aren’t you’re average cookie-baking ninjas, they’re actual rather peaceful folk who feel more at place relaxing in their little ninja huts than going to war. As such their only hope of mobilising themselves for battle comes in the form of the old Master Ninja, one of the only remaining ninjas who remembers the old ways of warfare. So you (playing Master Ninja) must organise the battlefield and keep Mr. Demon and his minions away from the cookie recipe. 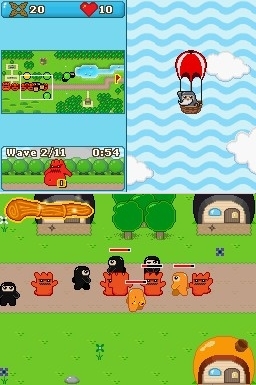 The screens are set-up as follows: the top screen is split into two, the top right is pretty much dead space, only showing the Master Ninja observing the battlefield from his hot air balloon and some of his specific animations if you trigger one of his special abilities. The top left shows an overview map of the battlefield and lists key information, such as how many lives and how much money you have left, and what type of enemies the next wave will consist of. The bottom screen, as you would expect, is the key battle screen which will take up most of your attention.

The actual gameplay in Ninjatown is similar to that found in most tower defence titles. The bad guys advance through the map and you lose a heart for each one that reaches its goal, let too many through and you have to try again. You’re given a limited amount of funds to spend on the construction of various ninja huts to prevent them from reaching their goal. You use the stylus to create ninja huts by clicking on a square then choosing the kind of building that you want to erect. There are always a very limited number of available spaces to place your units though, so thinking about which squares to use and what type of ninja hut to build is key.

The ninjas then guard a particular area around their hut (signified by a dotted circular line), but you don't actually control them yourself, the computer controls all of your ninjas. A ninja only goes into combat if a demon comes within that area, and when they do enter combat the AI is surprisingly reliable. As you get 2 ninjas per hut, the limits placed on the area they guard, and the limited number of plots of land, both serve to prevent overcrowding of areas and ensure the need for strategic placing of the huts. 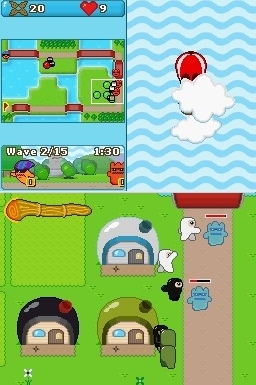 There are plenty of different types of ninja available to use, most of which aren’t available initially and are instead unlocked over the course of the game. They include Anti Ninjas (who reject the ways of stealth and instead just bash everything in sight), Business Ninjas (who are extremely fast attackers thanks to their addiction to caffeine) and White Ninjas (who throw snowballs at the enemy). That’s just a taster, there are a lot of different types of ninjas available, and whilst you invariably end up using some more than others (as is almost always the case with tower defence games), they all have their own strengths and weaknesses, be it in the realm of speed, health points, attack rating or range. You can then level up the huts with the funds you make from killing enemies to increase the attributes of the ninjas from that hut.

There are plenty of enemy variations as well, including basic melee fighters that are easy for your ninjas to take down, flying enemies which can only be attacked by ranged ninjas, zombies that drain health from your ninjas long after attacking, bosses that appear at the end of each level, and so on. Each enemy type tends to have a ninja that can counter it, so creating the right mix that will counter any enemy combination is essential to completing each level.

On top of the core gameplay of placing, selecting, building and upgrading ninja huts there are also some more minor gameplay elements that add a bit of variety to the game. First of all, there are other structures that you can unlock that provide bonuses to your huts when placed next to them, such as providing a larger range of effect for your ninjas. Secondly, there are tokens that you gain at the end of each map which you can deploy to create certain obstacles for enemies as they advance, for example the baby ninja token places a baby on the map whose cuteness so completely and utterly baffles the enemies that they’re temporarily immobilised. Finally, your character of the Master Ninja has a few skills that you can utilise after his meter has charged. These skills include things like a magnifying glass that burns enemies, or blowing into the microphone to push enemies backwards. Only two or three of these skills are actually of any use though. 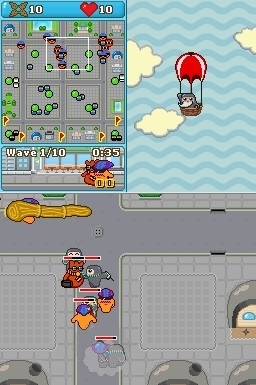 It is worth noting that the game controls superbly on whole, with the stylus being used for all of your actions and the D pad being used to control the camera. The whole interface is easy to use and responsive. My one complaint of the controls is that when you place rallying points (which tell your ninjas where to stand when they leave the hut) you have to select the exit icon once you're finished. The problem with this is that you're usually in a rush, so you may find yourself just clicking where you want the rally point to go and then carrying on as normal without exiting the command, so the next place you click on the map will override your previous command and set a new rally point.

As you can probably imagine from the description of the story at the start of this review, this is very much a child-friendly game. The ninjas all look like cute cuddly teddy bears, rather than battle hardened ninjas, and even the bad guys, like the zombie devils, have an adorable sackboy-esque appeal. That’s not to say the game lacks depth, make no mistake; this is very much a tower defence strategy game, just one coated in cuteness. The light and airy dialogue and cut-scenes serve to underpin the cute appeal of Ninjatown because it’s so well-intentioned and humorous.

The graphics are a little basic and the character models and building structures aren’t very detailed at all, usually only being distinguishable because of the different colours, and although they have small dollops of black shadow beneath them, it’s nothing special. All of the ninjas have very basic attacks, so the melee ninjas only ever throw the same identical punch every time. In the case of the ranged ninjas, the object they’re throwing at the bad guys varies depending on the ninja type, so for example the white ninjas throw snowballs, but the animation is identical between all of the ranged ninjas. In short, if you’re looking for a game to show off the DS’ graphical capabilities you best look elsewhere. However, on the flip side, the art style is pleasant and well suited to the game’s personality, and there’s nothing fundamentally wrong with the graphics, they’re just very basic. 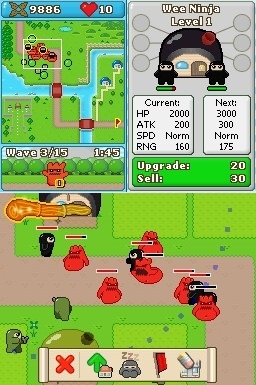 There is a fair amount of variation though. There are lots of different types of ninjas, and enemies. And the map design varies depending on the region you’re fighting in, varying from the smart business sector of Ninjatown, to the creepy Dark Forest. Each region consists of four maps with a similar art style, and each map has its own unique features and layout that require you to mix up your gameplay strategy.

The sound effects are similarly limited, with little variation, usually consisting of identical punching sounds for melee ninja attacks, and burping for enemy attacks. The music has a Japanese feel to it, with oriental-sounding chimes and bells. It’s an understated track and is very much ‘background music’, which is probably a good thing because it ensures that the music doesn’t become too repetitive or grating.

Each level takes about 10-15 minutes to complete, and the campaign will probably take between seven and nine hours (including cut-scenes and dialogue, but not including multiple attempts), which is short in comparison to a lot of DS titles, but is pretty good for a tower defence game. At the end of every level you’re given a rating based on your performance, which does serve to increase the value for perfectionists who will want an A grade on every level, but for most people this probably won’t be enough to encourage you to replay the game a second time. It’s a highly addictive game, particularly for tower defence fans, but because of the integral nature of the story to the game’s progression, and the way new units and skills are unlocked, I don’t think it will have much replayability for most people.

There is a multiplayer mode, which undoubtedly adds to the game’s value, although it is a little basic. It allows for both single and multi-cartridge multiplayer, with the latter having access to significantly more maps to play on. Both players simply play the game as normal, with the first person to beat a level being awarded a bonus going into the next match. Unfortunately, beyond that there’s no extra content here – you get a seven to nine hour campaign, a multiplayer mode, and that’s it. But those seven to nine hours are filled with great gameplay and very little filler, so don’t let the lack of extras necessarily put you off the game.

Ninjatown is an addictive game, full of colour, personality and great traditional tower defence strategy. It may not be as long or as pretty as Lock’s Quest, and besides the addition of multiplayer there are no extras to be found within, but it’s not full of repetition or filler either. If you’re looking for a great example of the tower defence genre on the DS, then I certainly recommend Ninjatown.