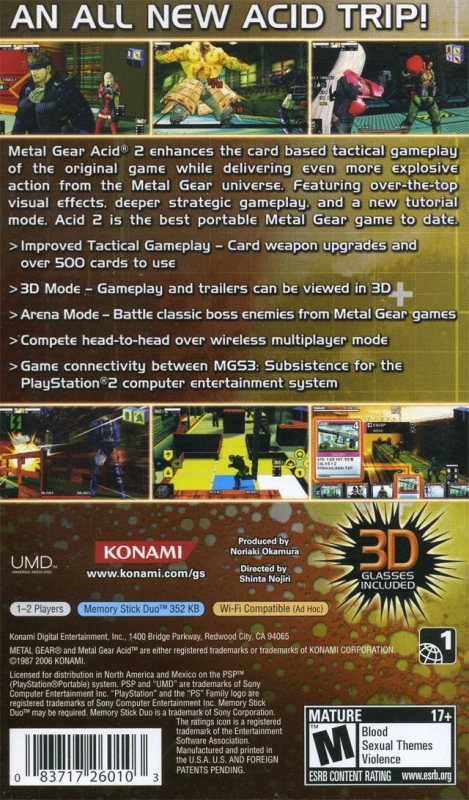 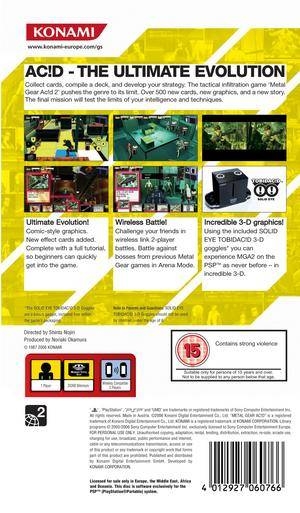 Metal Gear Ac!d 2 sees Snake taken captive by a man claiming to be an FBI agent. His captor coaxes Snake into infiltrating a top secret research facility, but is in fact a clever trap devised by the US Military and Venus, a female secret agent in charge of research and overseeing the creation of a third generation Metal Gear mechanoid system. As Snake attempts to defuse this potentially devastating project, he finds himself haunted by images from the past, and faces not only a wealth of tough adversaries, but his personal demons.

While the new game retains the popular card-based combat and movement system of its predecessor, Metal Gear Ac!d 2 enjoys a far more instinctive and comprehensive control system than that of the first game. Key advances include the ability to control Snake directly within 'Move' modes, while changing commands are now displayed in real-time to facilitate more rapid actions within action situations. This combines beautifully with a wider range of actions, too, with familiar Metal Gear moves such as slinging, crawling, and fighting now all accessible - and via the touch of a button.

These additions drastically broaden Metal Gear Ac!d 2's strategic possibilities and the speed at which decisions can be made. Further depth is then added with the number of cards on offer more than doubles from the original game's 200 to a massive 500. These also feature new ideas, such as 'Linkage Cards' which grant the player bonuses, while 'Trap Cards' initiate specific traps tailored to the current location when used.

Also key to card use is the new ability to upgrade cards to make them more powerful, while the innovative 'Cover Fire' system adds further depth to the game. And with so many new features included, Metal Gear Ac!d 2 now includes a thorough Tutorial Mode to teach newcomers the many intricacies its stunning gameplay offers, and insights into the complex assaults the 500 cards can offer.

Further additions come in the form of a new 'Arena Mode'. Akin to the 'Boss Modes' in previous Metal Gear Solid titles, this pits players against boss characters from previous games in the series, and is ideal for practicing new strategies. The popular 'Link Mode' also returns in an improved state, with players using the PSP's Ad Hoc mode to link up for one-on-one tag matches using personalised decks.