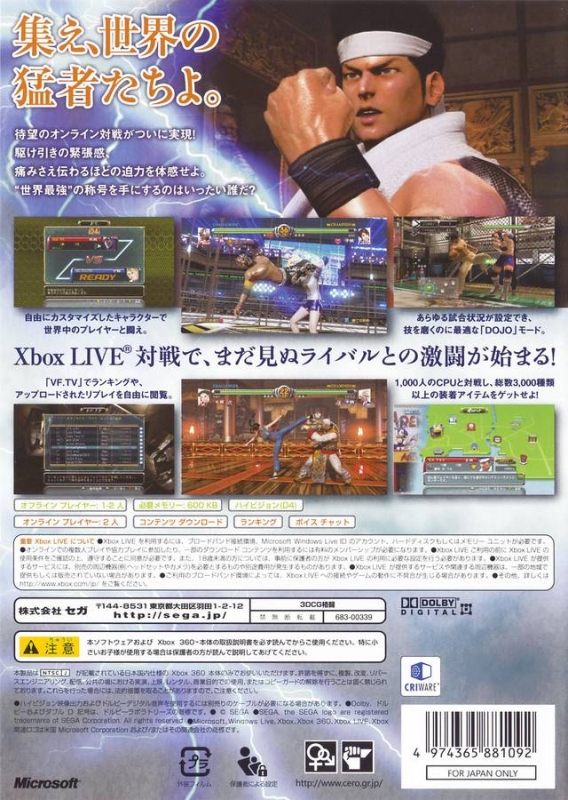 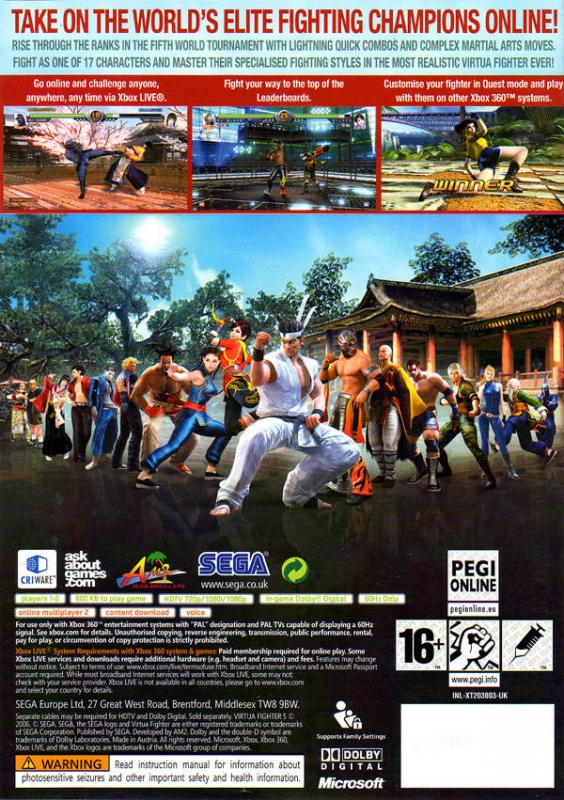 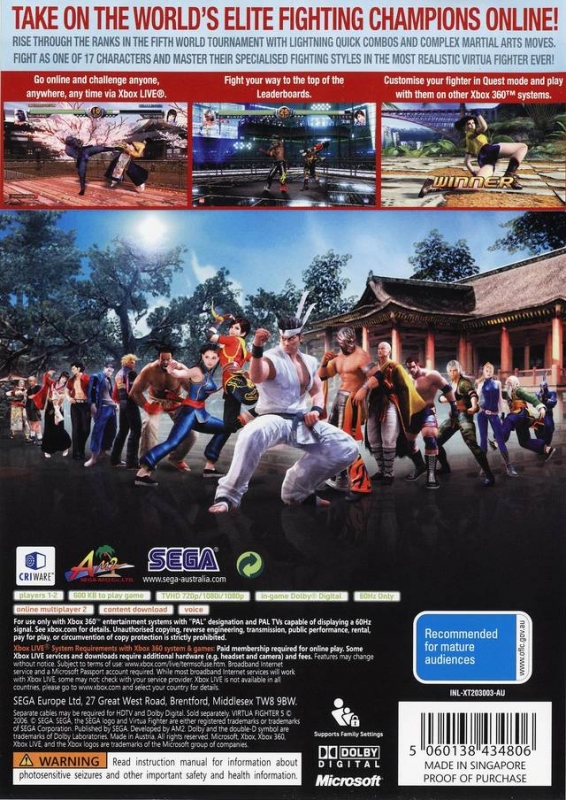 Another great iteration in a classic series.

Virtua Fighter has long been a quality series. From the birth of the series in the arcades of the early ‘90s to its iterations on today’s consoles, Virtua Fighter has remained as one of the premier fighting games on the market. After an arcade release in 2006 and a later PS3 release, Virtua Fighter 5 finally made its way to the 360 during the 2007 holiday season. Does it measure up to the legacy of its predecessors?

The game’s plot once again focuses on the J6 organization, who has invited 17 of the world’s top fighters in order to test their latest creation, Dural. Designed to be the ultimate fighter, J6 must test Dural and see if she is ready to bring about their plans of world domination. Although the first model was destroyed in Virtua Fighter 4, the new model is far stronger and poses a serious threat to whomever should win the Fifth World Fighting Tournament. The story isn’t explained or fleshed out during the game, but the plot and the back story of each character can be found in the manual.

There is a lot of variety among the game’s fighters. New additions to the character roster include the Lucha Libre wrestler El Blaze, and the Monkey Kung Fu specialist Eileen. The game also sees the return of old favorites, such as the series mascot Akira Yuki and long time eye candy Sarah Bryant. Each character has their own back story and fighting style, ensuring that everyone will be able to find which character suits them best. Unlike many other games, characters are fairly balanced and each one has killer moves and combos.

Living up to the previous iterations, Virtua Fighter 5 has high-quality gameplay. Fighting is tight and coordinated, and combos are still emphasized over button mashing. The varied fighting styles of the characters are a blast to experiment with, and provide a lot of variety in strategy. Characters like El Blaze and the professional Canadian wrestler Wolf are designed for throws, while the Drunken Kung Fu master Shun Di fights with his fists and the Muay Thai specalist Brad Burns is lethal with kicks.

In order to be successful in the game, players must learn how to pull off combos and use the right attacks at the right time. Attacks can be sent at either the high, mid, or low levels of an opponent (and these parts can be guarded accordingly). The game’s difficulty varies depending on whether the player has prior experience with fighting games or other titles in the Virtua Fighter series, but it’s sure to provide a challenge for anyone. Difficulty levels are adjustable, but skill is required regardless of the difficulty chosen.

Players can choose to participate in the Arcade mode, which follows the classic fighter model of facing increasingly tougher opponents until one reaches the final boss. There is also a versus mode for playing online (exclusive to the 360 version) or against friends, the Dojo (for practicing your skills), and the new Quest mode. Online play is well designed and can offer a lot of replay value. It’s also virtually lag free, ensuring that you’ll have no interruptions in your fights with other people across the globe.

Quest mode is a new feature in the Virtua Fighter series. It pits your chosen character against a multitude of rivals at different arcades across an island; all distinct in difficulty. The various arcades have different difficulty levels, and the number of rivals is nearly countless. Your character can be personalized using clothing items, accessories, and emblems won from fights. By far the most time consuming part of the game, Quest mode offers vast amounts of replay value and can clock in at hundreds of potential hours of gameplay.

To compliment the gameplay, Virtua Fighter 5 offers stellar graphics. The graphics tend to be more detailed depending on the scale of the object. Environments are beautiful, showing rich colors and incredible detail. Character models come second, looking great but not amazing. Small details are where the graphics tend to fall short. Things like body hair and muscles suffer from a lack of detail, making them look rather inhuman. The graphics for accessories and clothing differ, but are generally up to snuff.

While battling, or even just surfing the menus, players get a taste of the game’s music. Sometimes, the music adds a lot to the experience. A strenuous and exciting battle can be accentuated by a fast-tempo song, while at other times a calm track make a battle feel more smooth and graceful. The soundtrack was well designed to fit its purpose, and each song works for the stage it’s featured in. However, none of the songs stand out or are particularly catchy, and their potential to add to battles falls short.

Despite flaws in the soundtrack and graphical details of the game, Virtua Fighter 5 stands as one of the best fighter games this generation. The game is a blast to play, and the Quest mode and online offer tons of replay value. Fighting is fluid, and the customizable characters prove quite charming. The classic features of iterations past, combined with the latest additions by Sega AM2, make the latest Virtua Fighter an incredibly enjoyable experience. Anyone who is a fan of the series or fighting games in general should consider picking this game up.