Head of Marvel Games Jay Ong in the book reveals Microsoft passed on Marvel's Spider-Man in 2014 as it wanted to focus on its own IP. Marvel would eventually work out a deal with Sony.

"Being from console first-party in my past, I pinged both sides, both Xbox and PlayStation, and said, 'We don't have any big console deals with anyone right now," said Ong. "What would you like to do?' Microsoft's strategy was to focus on their own IP. They passed.

"I sat down with these two execs from PlayStation third-party, Adam Boyes and John Drake, in August 2014, in a conference room in Burbank. I said, "We have a dream that this is possible, that we could beat Arkham and have one game at least and maybe multiple games that could drive adoption of your platform.'" 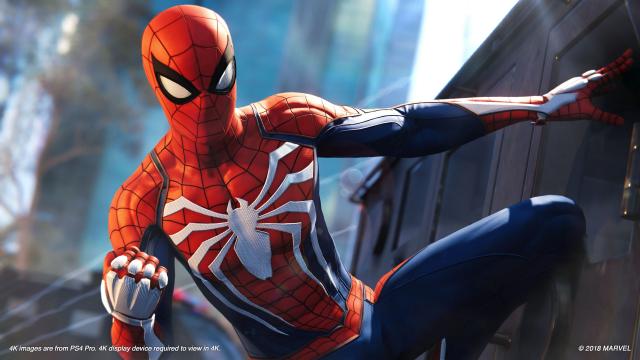 "Sony turned the project over to Insomniac Games, an independent studio at the time, but one of Sony's most important partners," reads the book "Insomniac had a long list of hits that were published under the Sony label—Spyro the Dragon, Ratchet & Clank, Resistance: Fall of Man, and most recently Sunset Overdrive.

"Insomniac was an obvious choice for the project. As a studio, Insomniac had an impeccable record as both a designer of hit games and a reliable partner for Sony. Another plus, one of the studio's most recent games, Sunset Overdrive, incorporated a fast-paced, highly acrobatic style of combat that was equal parts parkour, Tony Hawk's Pro Skater, and Call of Duty, a very Spider-Man style of fighting that involved swinging and grinding over cities while facing multiple enemies."

Price added, "Very early on, we knew that there was a great chemistry between us and our compatriots at Marvel. A lot of that came from being able to learn more about the Marvel universe from those who were really experts in it…guys like Bill Rosemann [executive creative director, Marvel Games]. At the same time, the Marvel team was fantastic in trusting us to come up with a new story…to come up with a new take on Peter Parker, and to explore the mechanics of what Spider-Man could be in a modern game."

But but Sony is evil and anti consumer for gate keeping Spiderman! blah blah blah.

It wouldn't have been the same game anyway. Even if they got the license, who knows what studio would have been developing it? Spiderman is popular yes, but that's not the only reason it sold.

If they got spiderman we would get something like crackdown 3

Sounds about right to me.

Great result for Sony, and considering history it really is a very hard and rare occurrence for an IP like Marvel to generate such a high selling game. And even with this info I bet there will still be people blaming Sony for taking Spider-Man hostage and that the game should be multiplatform.
I would just clarify a little the paragraph about the partnership between Insomniac and Sony, because the way it is written seems to indicate Sunset Overdrive was made as part of that agreement instead of an exclusive for Xbox.

Mad props to Insomniac on making quality Spider-Man games that rival the Arkham games. Definitely can't blame Sony for the deal, but I'm of the opinion that any licensed IP should always be multiplatform regardless of who the developer/publisher is. At least MLB recognized that and is making The Show multiplat. Even if it's purely for financial reasons lol

Why should they be always multiplatform? Even more when a company is paying for the rights to make the game and let's say another one decided to not even care about it? It is like wanting someone to pay the costs for you to get the benefits. Plus Sony doesn't have exclusive rights to Marvel IPs (2 games released from Square-Enix alone and multiplatform at that).

Because IP's like these have mass market appeal. Not just hardcore gamers, but you're going after the casual market and those that may have not played a game in who knows how many years. If you have Marvel or Star Wars IP, then you want as many as humanly possible to buy the game because it has that kind of appeal, and they're going to. Well, minus the Square games, but they shot themselves in the foot with Avengers that seeped into the Guardians release. Sony could've easily doubled if not tripled the amount of revenue and sales they could've brought in with Spider-Man. Not everyone, especially the casual market, may know what God of War, Ratchet and Clank, or The Last of Us is, but you know the vast majority will know who Spider-Man is.

IPs like these are so deeply ingrained into pop culture that spans decades and has given great joy to countless millions, if not billions, of people that why would you want to narrow down the number of those that can enjoy it? I used to play MLB 2K back in the day on my 360, which I got as a Christmas gift since I was too young to work. When 2K discontinued the series, I was screwed. Made me wonder why should a game that's based on a real life sport that's enjoyed by so many be limited by who can enjoy it. Even the upcoming Indiana Jones should be multplat, but I know I'm a minority on this topic. Original gaming first IPs are fair game, but licensed IPs I feel should be enjoyed by everyone.

IPs that have been developed by a company alone also have mass market appeal. Mario, Zelda, Pokemon, Halo and a few others have mass market appeal, doesn't mean they need to be multiplatform because of that.
Casual gamers outside of those platforms may not have played a game in several years, but why would it be responsibility of a platform holder to put the game outside their platform to please people that aren't their customer?
You do know that there have been only 2 games based on mass market IPs that weren't originally gaming that have really managed to sell a lot (Batman Arkhan and now Spider-Man) and that there have been plenty of titles that were multiplatform and didn't sell well? That was the main reason Activision saw no issue in giving up the IP while saying both they wouldn't put the budget to make a very high quality title and wishing them luck on finding a company that would make a better product than what they were delivering (and quite funnily it was similar with movies outside S-M before the recent surge of Marvel Avengers storyline)
It isn't me who wants to narrow anything down. But a company will invest money according to their own interest, so if a platform holder puts money to develop a game and pay for license that will be to benefit their platform and their profits, again wishing different is basically wanting to someone else to fund for you to reap.
Would you like to guess why the MBL2K was discontinued and why for so long MLB the show was exclusive?

To be fair, Xbox dabbled a good amount into new IP's during this time with Quantum Break, Project Spark, Ori, Recore, D4, Sunset Overdrive, Titanfall, Ryse, Screamride, Sea of Thieves, Scalebound (cancelled), but all of them besides 3 didn't find success or issues arose (ie Scalebound.)

Thank god they did :)

That's great and all but what is more interesting the what he says about what they wanted. They wanted to beat Arkham, in other words make a dent in what was at the time a WB/DC dominated super hero market, as when Disney bought Marvel they basically made no big titles for years. Reduced output to mobile games, and the dispute meant nothing was being done with X-men. They did the same with Star Wars, LucasArts were making games then Disney just cancelled them. A waste, such potential but Disney too years to realise we are a market. :P

Big regret from Xbox "focusing" on their holy trilogy IP

I always thought Sony got first refusal rights do to owning the movie rights for Spider Man.

If only they bought Insomniac to make Spiderman. Would have been a massive blow to Sony. Also Insomniac is good at making quality content quickly. One way or the other MS screwed itself.

This. Even if i am still of the believe that an IP such as Spider man should be multi plat no matter what. buying the SM IP would be no good if you had no one to develop a good spider man game. Still i stand by my original statements always and Spiderman should not be exclusive.
Its not the same as mario as that IP was made "By" Nintendo but Spiderman is pretty much every bit as popular of an IP but has always been 3rd party till this shitty deal. So yes its still a shitty deal.

Xbox declining to work on a Marvel IP isn't something I blame them for during that time. Their 1st party studios were fairly thin back then, so abandoning one of their successful IPs for an unknown success of a Marvel game wasn't in their best interest. Most superhero games at that time, besides the Arkam series, were not hugely successful. I don't think there was a Marvel IP until Insomniacs Spider-man that was a huge seller.

With all that said, it's not like Xbox won't work on a Marvel IP sometime in the future. Now that they have the huge number of 1st party studios, they can be more flexible. If say, The Coalition wants to make a Marvel game after they finish up Gears 6, I'm sure MS would be okay with it. Especially with the success of Spider-man.

i see what you are saying, i do not understand all the down votes here.

Not that I care about being downvoted, but I figured after 20 something downvotes at least 1 person would say why they disagree with me lol.