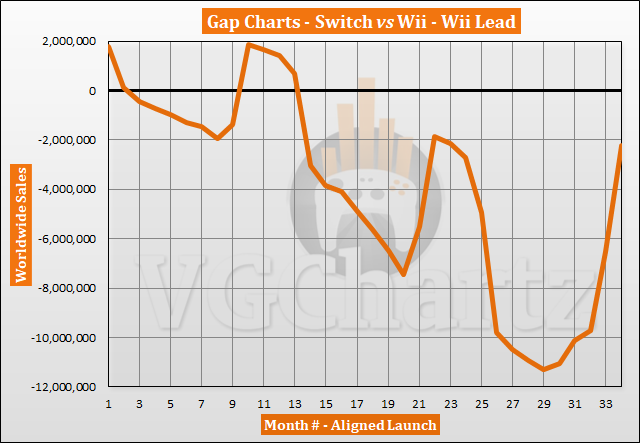 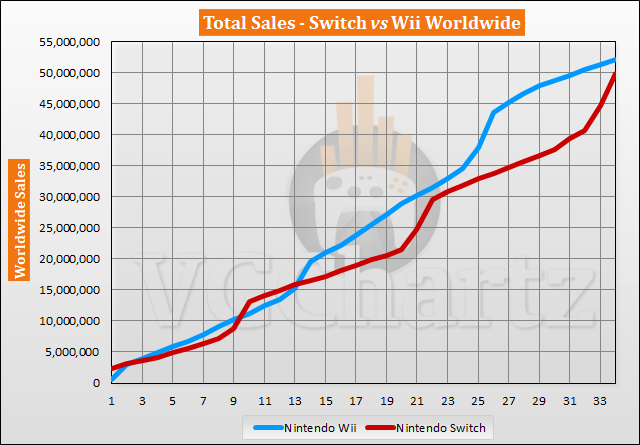 December 2019 is the 34th month that the Nintendo Switch has been available for. During the latest month the Switch caught up with the Wii by 4.26 million units. In the last 12 months the Wii has outsold the Switch by 384,951 units. The Wii is currently ahead of the Switch by 2.24 million units.

Wii only gained on Switch 384,951 in the past 12 months. That is actually impressive for Switch, because it is basically selling at the same pace as the Wii for the past 12 months. But the Wii got a hell of a head start on the Switch. Switch will pass Wii easily only the Wii loses its momentum. Wii sold like it was running a sprint. Switch sells like it is running a marathon.

The gap should not get bigger than 7M in favour for Wii due to inverse head and shoulder gap curve pattern. Switch already left the downward pitchfork. Resistance at 5M did not hold. Re-check for support at 7M very possible because of Wii holiday season.

5-6 more intense months for the Wii and then it collapse.

So 17 million is a collapse? Here's a thumbs up for you!

In the next 4 Month (week ending January 2nd 2010) Wii will sell another 12.6(!) Million units. In the last 4 month (September 2019 to December 2019) Switch also sold 12.6(!) Million Units. So basically since the launch of Switch Lite Switch has reached Wii-like numbers from 10 years ago!
Switch sold about 3 million units January to April 2019. It should sell more in the same time frame of 2020. Lets make it easy and say 1 million per month, which equals 4 million in total. Switch then will be behing roughly 11 million units, which means losing around 1 million to the Wii for the 12 month time frame. Roughly +33% YoY should be OK-ish considering Switch Lite and Animal Crossing launch.

DaAndy : don't say something negative and realistic about Nintendo, or you will get more red thumbs...I have canceled the one you had by adding a +

Amnesia, I downvoted your post because of the paranoia that you displayed.

RolStoppable : thank you. And I have up-voted yours for your loyalty.

Damn! The little switch is keeping it close.... even when the big one couldnt.