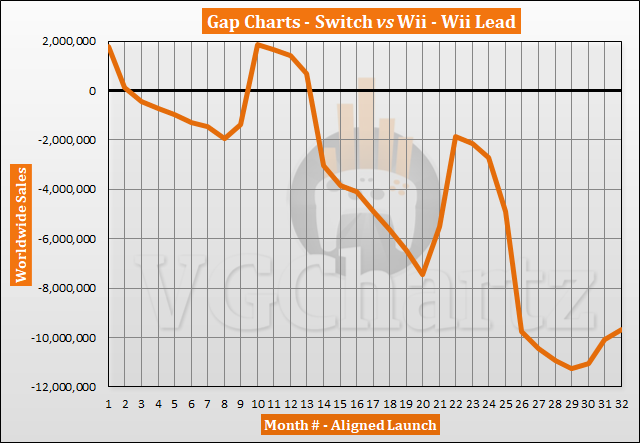 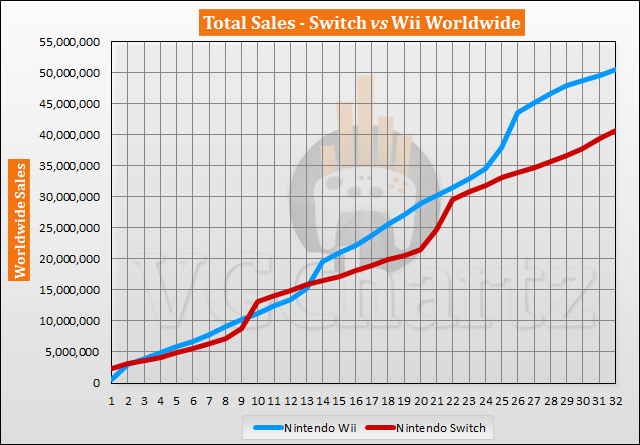 October 2019 is the 32nd month that the Nintendo Switch has been available for. During the latest month the Switch caught up with the Wii by 408,110 units. In the last 12 months the Wii has outsold the Switch by 2.23 million units. The Wii is currently ahead of the Switch by 9.69 million units.

Switch managing to resist to the Wii

It can touch it this winter...

I forgot we could only count on Nov-Dec, I was considering a whole Q3 with possibly +11,5 for the Switch.

Last year the Switch only won to the Wii in the two holiday months. Now it has already three months (small) gain on the Wii before the holidays start. This looks good for Switch, it looks like it might be able to somewhat match the insane momentum the Wii had. This graph actually makes me hopeful that Switch might be able to beat the Wii, as I clearly expect a longer life for the Switch. 2021 will be interesting how the Switch stands against the new consoles from the competitors.

In a year you'll wonder why you ever doubted that Switch will sell more than the Wii lifetime. When you cross-reference the Switch vs. Wii and Switch vs. 3DS graphs after 44 months, you'll do the maths. With Switch tracking so far ahead of the 3DS (76m lifetime), the idea that Switch won't sell more than 101m lifetime (Wii) will be ridiculous even to you.

The Wii had a monster holiday in 2009 so the gap will increase a bit after 6 months. But then Switch should start gaining ground.

I think Switch ultimately will make it and reach Wii and why not surpass it? It can do it with the right games and support! It is already on the right track!

I think we will have a 2 - 3 million gap in favor for Wii after the Switch holidays. Switch Lite doesn't seem to be that big hit like DS Lite.