Atlus announced the Persona series has sold over 10 million units worldwide since the original launched in 1996.

Persona 5 has been the most successful game in the series with over 2.7 million units sold as of April 2019. It originally released in Japan in September 2016. It also had the biggest launch in the US for the franchise. 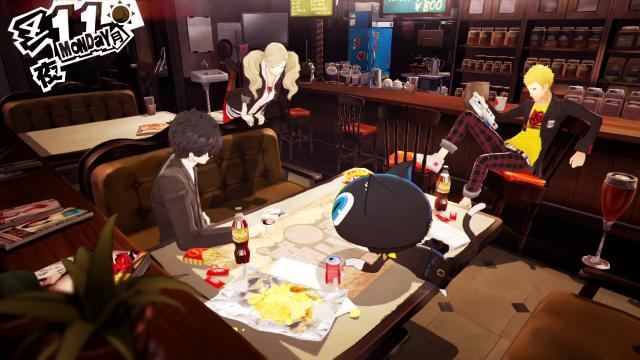 The next game in the series, Persona 5 Royal, will launch for the PlayStation 4 in Japan on October 31 and in North America and Europe in 20.

And i will add yet another copy to that ammount come next year.

Such a HUGE game... and it only sold 2.7m..... and 10m overall. People need to stop being scared to try jrpgs and give this one a go..... will it takes 100+ of hours? yes most likely, but you ll probably enjoy most of that, and at the end overall have a good experiance.

I'm not even remotely scared of JRPG's. I'm just bored of ones that stick with the same style and formula, years/decades later.

I'd be more into JRPG's, if they took on a few Western ideas here and there.

It sold pretty well for a niche series steeped heavily in Japanese culture, and Sega considers it a success. 2.7 million is more than Final Fantasy 6 sold on its first run, and the Japanese console market was much bigger back then.

They should really try porting it to other consoles. If MHW was also on XBONE and PC why cant P5?

Currently playing through Persona 5, it's one hell of a game.

Its really sad knowing how much effort and talent went into making these games and the entire series has sold only a fraction of one CoD game.

Thats JRPGs for you.

this, what Mystro-sama said.... Persona 5 derserves so much more sales, its sad so many only play like CoD-Madden-2K games, and miss out on experiances like persona series.

I mean they're literally reselling the game next year and shilling out spin-offs. And they don't even try to expand outside the Playstation 4. I don't find it that tragic honestly.

They just need more exposure (more marketing), the Nier franchise was even more niche than the Persona series, yet Nier Automata sold way more than P5 and its becuse it actually got a lot more presence in events like E3 and what not, (definitely got more marketing than the previous Nier and Drakengard games).

And yes im aware Nier Automata is on multiple platforms but even on just PS4 it sold more than P5 did.

If i was a higher up at Playstation after seeing that Atlus has given exclusivity of the Persona series (since the beggining) to Playstation for no other reason than "why not?", and after seeing how WELL it reviews and the strong fan base it has, i would take advantage of that and approuch them with the intention of offering them a bigger budget for the marketing of the next game (as well as some extra money for development) and i would lock it as an exclusive series to Playstation.

"But estebxx you STUPID FUCKING IDIOT!, why would you do that if the games are already exclusive? its a waste of money!".

Well because i honestly dont think the series is gonna remain exclusive for very long, i do believe that its only a matter of time till it goes to the Switch, and i think that the sales of the upcoming royal edition are gonna be a let down for what Atlus is expecting, i mean... they used to release this "complete" editions as exclusives for PS handheld and they sold better than the original console release, and in no way do i see this new Royal edition selling better than the original version on PS4, and after that i do think they will heavily consider moving to the Switch (and unless they are insane... they will).

"And yes im aware Nier Automata is on multiple platforms but even on just PS4 it sold more than P5 did."

I'm not sure if that's actually true. The last official numbers we got were 2.7 million shipped for Persona 5 and 4+ million shipped for Nier Automata. Only a few hundred thousand copies of Persona 5 were sold on PS3, but Nier Automata has had a lot of PC sales. It's estimated it's sales have been 1-1.5 million on PC, which makes a lot of sense considering it sold around 1.5 million physically on PS4. That would give Nier Automata a split that's probably around 2.3 million PS4 / 1.4 million PC / 300k Xbox One. Or maybe something like 2.2 million PS4 / 1.5 million PC / 300k Xbox One.

Of course that was a few months ago, so maybe Nier Automata outsold Persona 5 on PS4 now, but that's just because Automata has had much better legs in general. It continued to sell 500k every 5 months well after launch.

Just saying, the multiplatform release of Nier Automata really helped it out, and I fail to see how it wouldn't for Persona.

(which btw I know you said that being multiplatform makes sense, but what I'm trying to say is that that would be preferable to even a Sony moneyhat alternative, simply because it would probably be more successful than even Playstation exclusivity with a big marketing push)

Of course being multiplat would help sales, all i'm saying is that with Marketing it would obviously sell better while still being an exclusive.

To be a bit more clear, we are talking about how we wish the game sold more, and obviously if it was a multiplat it would sell more simply because it would reach a bigger audience, however this game is an excluive and even the new Royal version was announced as an exclusive again, why wont Atlus port the game to Switch? i legitimately dont know... so if we are talking about increasing the sales of game thats exclusive the only thing comes to my mind is having a bigger marketing push.

Essentially i was arguing about how could this game (that happens to be exclusive) sell more, now obviously if it was a multiplat it would sell more (and i agree it would likely sell more than the game being exclusive with a marketing push), but the reality of the game is that well... it is exclusive, and thats why i concluded on the marketing stuff as the only way to increase its sales.

Sorry for the multiple comments, i realize my second reply is just redundant but i cant delete it.

It's okay. I agree with you, lol. I just think I'd prefer multiplat releases to exclusivity in general, but obviously being an exclusive that's treated with high class respect is preferable to nothing! haha.

I have 2 opinions as to why it is not multiplat:

I'm guessing number one, or perhaps it's because Atlus is stretched thin with its current projects now, which would include SMT V for Switch. P5R is releasing nowhere near Fire Emblem, and in any case, I doubt P5R posed any credible threat to FE's sales. Three Houses is phenomenal.

If only Atlus stopped making them exclusive and released them on multiple platforms...

I like how you were the only one downvoted, for wanting the game to earn more sales, and for more people to play the damn game.

Not that I care about the downvotes, but yeah, shows about some people's logic.

It shows childish and petty behavior, is what it does.

Remove the downvotes, and the children have to come forward and mutter their flawed and selfish opinions.

I know who gave the downvotes anyway, it's not hard to tell over these years of being on here. I just want them to know that they are childish in thought, but cowardly to not confront.