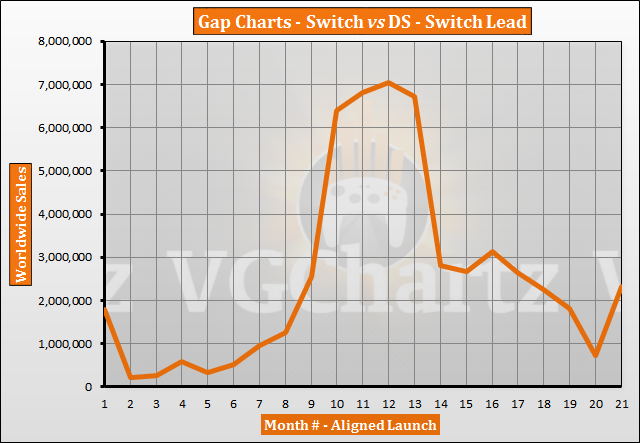 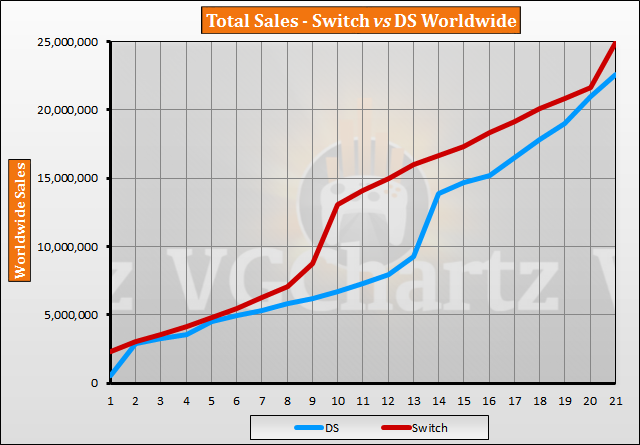 November 2018 is the 21st month that the Nintendo Switch has been available for. During the latest month the gap grew in favor of the Switch by 1.61 million units when compared to the Switch during the same timeframe. In the last 12 months the DS has caught up by 213,641 units. The Switch is currently ahead of the DS by 2.33 million units.

I mean, Switch is holding up quite well, it won't keep this lead most likely but I'd like to see it try.

Starting from Janruary this is gonna be a bloodbath.

Already released by this point.

Month 17 represents the first full month of the DS Lite in Japan, month 20 the rest of the world.

With the increased momentum for the DS of year two Switch lost most of it's lead. Now the holidays will bring it shortly in stronger lead, but I expect DS to break the Switch line if they reach their holidays or shortly after. Then it will be very interesting to watch, if Switch in 2019 can match the momentum of the DS.

I really hope that the Switch can at least stay competitive with the likes of PS4 .... I don't really care about any console going for the PS2/DS sales figures because it's so unlikely, but the 130Mil mark is where I'm hoping the Switch can land.

Yeah, I think it is doubtful that Switch can match the momentum of the DS (it failed this year) and that it has the longevity of the DS. But DS is extraordinary. At this point I'm pretty confident the Switch will sail past 100M.

I agree. Even hitting 100 million would be a massive accomplishment.

Switch won't match the momentum of the DS - the DS eventually had three years in a row that each were ~30m - but in terms of longevity, Switch is in a position to outdo the DS. Nintendo was rather quick to shift their focus to the 3DS, so Switch can close the gap on the DS with a longer tail.

A longer tail is possible because Switch started out with a much higher price tag and third party support is looking to be at a higher quality and quantity level than the DS's for a longer amount of time. If Nintendo sticks to their guns and tries to get as much sales out of Switch as they've been trying with the 3DS, then Switch can compete with the DS's lifetime sales.

If somebody wonders why the 3DS has much lower lifetime sales than the DS despite a bigger effort by Nintendo to squeeze out every last possible sale, it's because the DS hardware had a positive reception whereas the 3DS had to battle against its negative reception of the stereoscopic 3D throughout its life.

I think the longevity of the Switch will also depend on how the release of the PS5 and XB2 affects its sales. I assume Nintendo is going to release a Switch Pro before they release to reduce this impact.