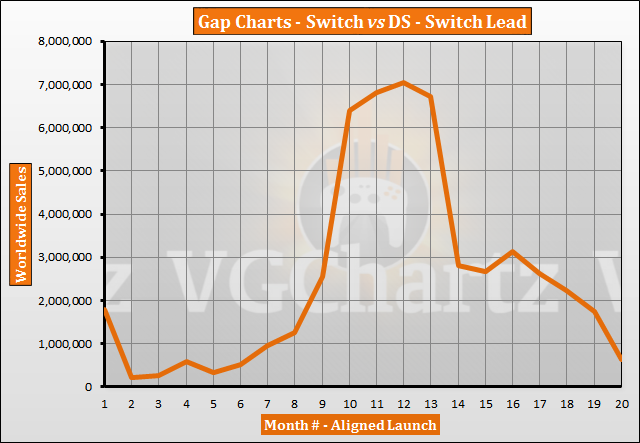 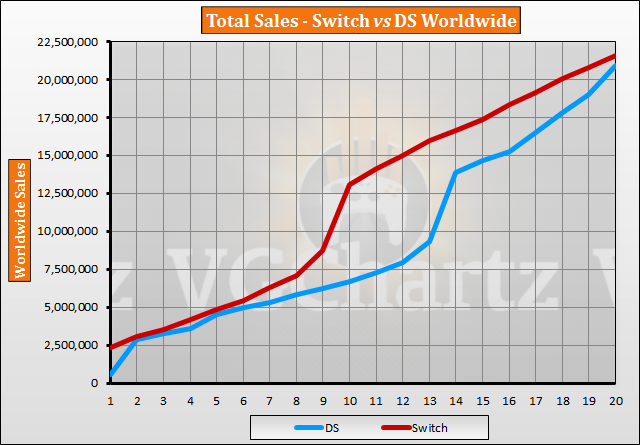 October 2018 is the 20th month that the Nintendo Switch has been available for. During the latest month the gap grew in favor of the DS by 1.12 million units when compared to the Switch during the same timeframe. In the last 12 months the DS has caught up by 626,503 units. The Switch is currently ahead of the DS by 639,893 units.

Has the DS Lite finally launched or is this just the start of the holiday sales spike?

Too early for the DS, on the graph it is only 9 months. There might be a new booster game release at this moment.

I just looked it up and it's already on the graph. The DS Lite launched in Japan in month 16 and North America/Europe in month 19.

Definitely. You can visibly see its impact in the charts.

DS launched in the holidays? Well, it looks like momentum of the DS picked up. Switch will increase the gap over the holidays, but if the DS holidays kick in, it will take the lead.

The DS Lite just launched so it'll probably take the lead next month.

I think the bump this month is the DS lite. With poekmon and smash, switch will not go down so easy

@Eagle: I think Switch can take the lead shortly, because of unaligned holidays, but the DS-holidays follow shortly after. And after then there is no turning back, Switch will not go to 150M.

Agreed. The Switch might keep its lead but only through the holidays.