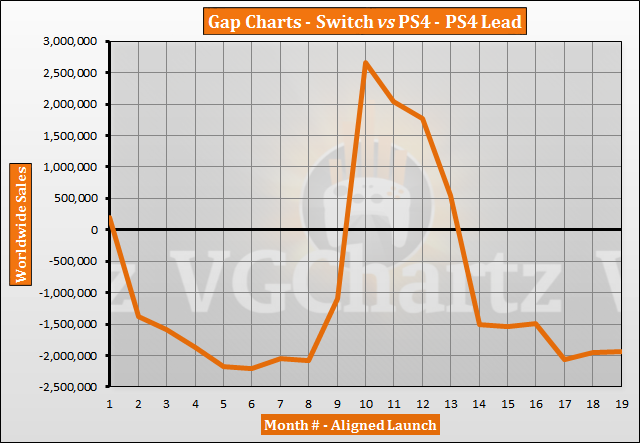 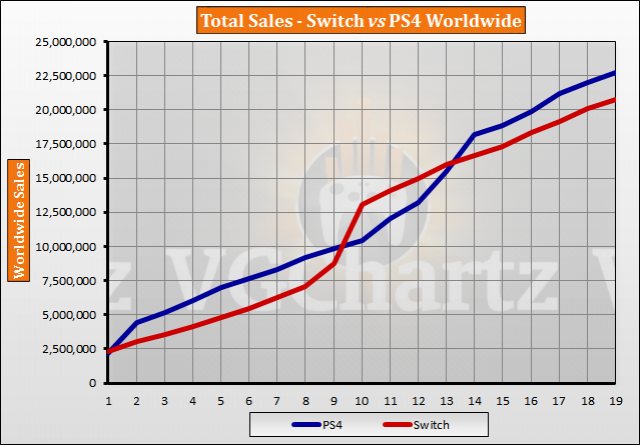 Get ready for another cross to happen.

I expect Switch will cross around month 20-21. Then about 3 months later PS4 will come back on top. Then about 7-9 months after that Switch will be on top, but this time it will stay on top forever. Switch is going to go into overdrive next year especially right near the end.

Where did he say that?

Not Ljink, Liquid Laser. "Switch will be on top... Forever" if memory serves me well he actually expects the switch to be the best selling console ever. So 155m+

LMAO, my bad, I read that comment and somehow didn't notice that part. xD

I expect it to continue like this as long as Nintendo can keep the Switch selling.

Oh, this is a really exciting comparison. As can be seen, the lead in the second year is not bigger than in the first year, so it is all for christmas happening at different times for both consoles. But basically they are at the same. It will be thrillign to see if Switch manages a bigger christams this time, or if PS4 will pull ahead with it thrid christmas.

It's kind of cool to look at this in graph form because you can literally see christmas in both consoles sales. PS4 gets ahead in months 2 and 14 (Christmas for both), Switch bursts ahead in month 10 (it's one and only Christmas). This Christmas will be a big one for Switch... I expect it to go back in front of the PS4... but will the hike be as big as the PS4 did in month 14? It certainly won't equal Switch's month 10... if it does I don't think PS4 X-mas #3 will be able to make it cross again.

Why does it look completely different under "Tools -> Hardware by Date"? The PS4 Line is in the complete September over the NS Line. How can NS have sold more often in September?

This chart is comparing Switch sales to the first 19 months of the PS4; you are comparing it to the past 19 months.