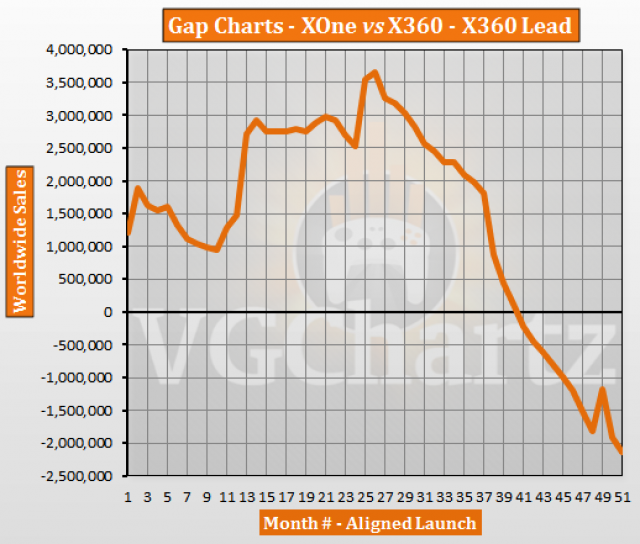 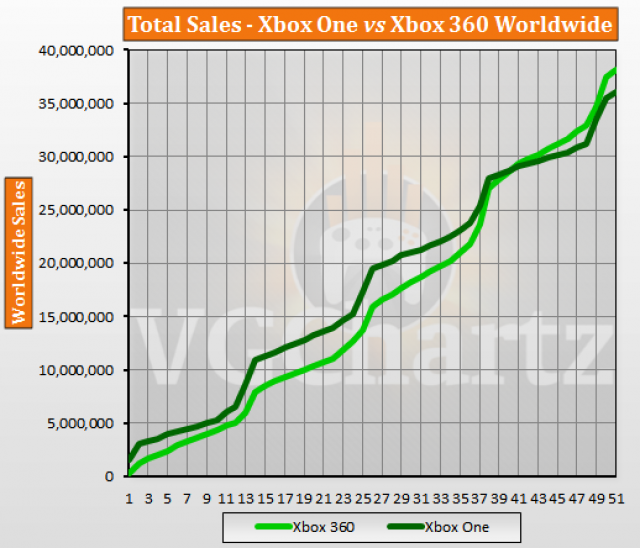 but these numbers are strange because this is according to vgchartz. we all know the gap is bigger than that.

I think the gap will grow further within the next 2 quarters only to narrow it a bit with holiday spikes.

Falling behind pretty fast. Still though, I think XB1 is on track to sell 55 - 60 million, which certainly isn’t bad.

It's only 2 mill behind. How is that pretty fast?

I'd say 60 million is the low end of the estimate.

I don’t know. 360 got a pretty significant boost from Kinect and Elite model. I could be wrong, but I don’t think X is going to extend sales in the same way. If MS chooses to wait a while before releasing a successor, then yeah 60 million is low, but if we see a successor by 2020, 60 will be kind of high.

Isn't the XBOne much more profitable than the 360 already, though? Didn't Microsoft have considerable losses during the first years with the Red Ring and all that?

For your information, the XB1 almost sold 4 times as much as that piss poor of a console Wii u

You finally did something that lives up to your username. Good job.

@Darwin I talk about sales performance
@Ahs Switch will caught up Xone in 2019
@flash Well, this time im not trolling..

@ Ahsmilk: Not that the XBox One didn't outsell WiiU and my math may be off but... 4x14 equals 56m, which isn't even near XBox's number.

Almost neck and neck. Crazy how well the X1 is actually doing yet the way majority speak of it sounds like it should be doing alot less. Plus MS isnt giving figures out anymore so who actually knows for sure how well its really doing.

It started out stronger but has remained stagnant while 360 is picking up steam.

At one point XBO had more than a 3.5 million lead, now it has a deficit of over 2 million and the gap is going to continue to grow as 360S & Kinect boosts have yet to come into affect.

zorg1000
Though I agree with your line of reasoning, the future is not set. We know how things played out for the 360, but we don't know what M$ has in store for the Xbox One. It will most likely sell less than the 360, but it doesn't have to be by a landslide.

Sure, its possible that Microsoft has sort of big hit that changes the XBO trajectory but i just dont see it happening. Neither the S nor X model has, Kinect ia dead and Sony already has VR so Microsoft needs to come up with a new, innovative and mainstream hit to turn the corner.

Im thinking ~55 million lifetime is where XBO will end up.

Not a chance. Even if nothing new happens, the Xbox One is set to pass 55 million by the end of 2020, and that's not taking into account that it's up YoY. For me, 60 million is the lowest estimate possible, as in worst case scenario.

How do you figure its set to do 55m by the end of 2020? You're not expecting yearly sales to drop? Here are my yearly predictions.

@Zorg, how do we know for sure these figures are accurate? The X came out which would have added a good sum to the total sales plus we dont know whats in store as to what Reviniente said aswell. Also how do we know if MS will stop selling X1s? For all we know it could end its generation cycles which mean we could be in 2030 and the X1 might of sold 1billion consoles by than which was MS target from the start. I predict the X1 will sell less than 360 in the same life apan however it won't be by much and i see the X1 overtaking 360 rather easily if there is no generations (XB2) coming out.

We have a good idea of sales, not just from this site but from NPD, GfK & Media Create and industry analysts which put XBO sales at ~35 million. Even if they arent 100% accurate, we at least have a general idea of sales.


You're using a whole bunch of "what ifs" which are never a good argument and read my earlier post, i admitted its possible that Microsoft does something that ends its current trajectory even though its unlikely.

@zorg Your opinion is no different to mine. Its still what ifs on your side aswell. I am basing my point of rumours and directions. Consoles at any stage of there life can boost up in sales at any time. My OP was about how many claimed the X1 a failure and unsuccessful yet its only 2million behind the most successful Xbox consoles and one of the most successful consoles last gen. X1 seems to be doing quite fine even without any boosts.
Also those sources still dont know whats accurate, only MS know the real story.

Not really, mine is based on the sales performance up until now and the things coming we know about while yours is what ifs and rumors.

I dont think its a failure or unsuccessful but your "its only 2m behind" ststement doesnt look at full picture. In the last 2 years there has been a ~5.5 million swing in 360s favor and 360 hasnt even reached it peak yet meaning the probability of the gap increasing is very high.

Like i said, even of they arent 100% accurate they are still in the general ballpark. We have actual data for US, Japan and a few of the bigger European countries so we have a really good idea of sales even without Microsoft revealing them.

Everything in these threads is all assumptions. X1 can very much hit it off next year if MS suprise us. They know whats going on and they know there 360 sales charts. 2m is not much considering the X1 was in front for quite some time before hand, so technically the X1 is more successful than the 360 in its launch years etc. Anything can change and like i mention before we dont know the life span of the X1 and we know the 360s so it would be bloody funny if MS keep the X1 for another 5 years and outsells the 360. Than we will hear "but the X1 was on the shelf longer" excuse.

Nothing good comes from these comparisons and from what i know the X1 is a better financial system than the 360 so at the end of the day, i dont see MS kicking themselves over the X1, its not the WiiU or PS3. Its making them money and only more in the long run.