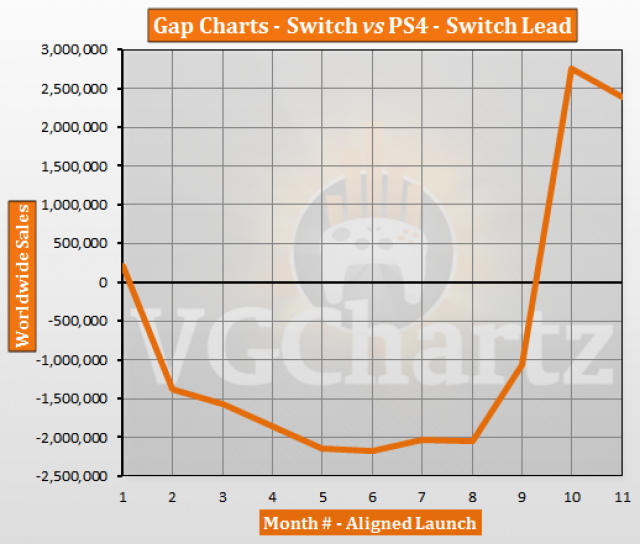 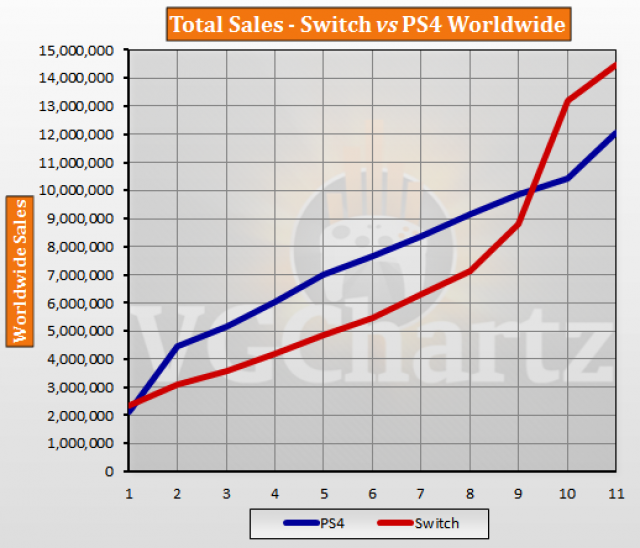 January 2018 is the 11th month that the Nintendo Switch has been available for. During the latest month the gap grew in favor of the PS4 during the same time frame by 365,644 units when compared to the Switch during the same timeframe. The Switch is currently ahead the PlayStation 4 by 2.38 million units.

Switch lead decreased in the last month. January 2018 vs. September 2014. Destiny moved a lot of PS4s.

Nothing really worth of note for February 2018 vs. October 2014, so Switch is going to finish the first twelve months with a comfortable lead.

Booyah! Upvoted myself and downvoted Cloudman and OTBWY. My comment is the best. No, really. It is.

Upvoting just because Kim is cute.

Well, the Switch seems to continue doing well so far. Hopefully it can keep up with sales.

It's great to see the PS4 and the Switch doing well launch aligned.

Both are doing wonderfully, and it is good to see two devices do well.

From the second year April to March, shipments of PS4 were 14.80 million units. Switch shipments from April to December were 12.12 million units. If Switch exceeds, 2.68 million are needed by the end of March.

It would have 13 weeks to do so.
Let's say it sells an average of 200k for those 13 weeks, that would be another 2,600,000 units sold, bringing shipments up to 14.73 million units with just those units sold. If we add whatever shipped units are on shelves, I think Switch shipments from April to March would be 15 million, which is what Nintendo is currently forecasting.

According to FT there was an article that Nintendo is planning to produce 18 million. So I think that Nintendo will ship around 16 million.

I can't create any new post, and this single question doesn't deserve a whole topic, I hope that someone can answer : my second favorite game after Zelda on the Nintendo Switch is...Fast RMX. Do you have any idea why this game doesn't appear on the NS chart ?

If it is worth anything to know,Fast RMX was in the 8th place on the best selling games on the eShop last year. We don't know the numbers but it did very, very well.

What the hell is going on here. Very few people have said anything that warrants being voted down so viciously.

I have no idea why ArchangelMadzz was downvoted, others...eh were kinda asking for it.

Looks like a couple of Gold Subscription Nintendo fans are hanging out on this topic.

lol, forgot all about those extra votes you get.

Here have my 2 upvotes!

And how do you know they're Nintendo fans?

Because of the massive downvoting of any comments that might be perceived as anti-Nintendo.

What if the downvotes are just from anti-Sony entities? Or trolls? Or Putin?

You don't need to be a Nintendo fanboy to downvote stupid comments.

But you'd have to be one to think some of these posts that got downvote are stupid. One of them is an actual fact, but it got downvoted to hell.

Votes are completely anonymous. We don't know a thing about the people behind them beyond their vote.

Ah, yes, the "let's dance around the reality that it probably is bad Nintendo fanboys but it COULD be Hitler" game. Love it!

Hope it sustains the lead...No serious competitor to Sony...

Gee all the "pro" playstation comments are downvoted to at least -8.
And whats highest comment? No need for more than one guess..

I mean,one of them is literally asking for people to downvote him...

I know Stuart all we can do is try to please these people :(

Oe's saying switch domination and is downvoted to hell

The 3DS was similarly tracking ahead of the PS4, thanks to the dual spikes of launch and holidays. We know how that turned out. Ok, go ahead and downvote Nintendo fanboys.

That was probably mostly due to the big price cut the 3ds had in its first year. The 3ds always struggled to keep sales high without cuts or hardware revisions. It is hard to judge how a console will do based on its first year. The ds had a pretty slow first year compared to a lot of consoles.

Aren't you the same person who is permanently 12 years old over at GameFAQs? You've been 12 for the last 12 years or so. Are you going to grow up ever or is it congenital?

Please don't taunt those already moderated. If you disagree with a comment, we have the downvote system for a reason. If you think they've gone too far, use the report function. Don't resort to flaming.

Considering the PS4 is closing fast on the holiday season, it would actually be more shocking to me if the PS4 wouldn't have taken that month (and take the 2 following ones for that matter)

This launch alligned comparison should have a million asterik's.

It didn't have that asterik when the PS4 was the one with the holiday season and Switch didn't...

Both already had one holiday season in this comparison, what are you talking about?

The PS4 already had its first holiday season and is coming up on its second one.

Even if you start comparison from the beginning of April, PS4 is 500k in lead. By the looks of it, it will lose in next few weeks

@luccacardoso1: Switch has had a full Holiday, yes, but PS4 released in the middle of November. Still a bit of holiday sales time left under PS4's belt before the 12-month mark.

No, the holiday season does -not- start that late. Geez, who on earth told you that? It'd be an absolute nightmare if everyone only started their holiday shopping near the end of November.

I wonder why all the positive Switch comments get so many upvotes????

@StreaK In this thread? I ain't really seeying people praising the Switch, the people getting upvoats are just people correcting the fact about the PS4's holiday.

There's nothing to correct about Madzz's post, though. PS4 still does have more holiday season left.

Ok, there's only one month left for us to have a 12-month comparison. And I really doubt that the PS4 will outsell the Switch by almost 2.5 million in its 12th month.

I don't believe anyone said that it would.

@Stuart: I didn't really say anyone was praising the Switch lol. The positive Switch comments that are in favour of the Switch, not the PS4. Oh well, I've been through this before so it's not like I didn't expect it.

Wow I didn't realise my comment was so controversial?

PS4's holiday season and launch was the same thing. I honestly have no clue what's wrong with my comment. PS4 is gonna take over in the next coming months then Switch will take over again etc.

I'm actually really amazed by the thread this has become, damn you guys are crazy.

I really really dislike these comparison charts simply because it ain't apples to apples unless both consoles released during the same month. And plus, PS4 has been killing the sales of the Switch right NOW so even as a far older console the PS4 is currently outselling the Switch (which you would think would not be the case) so in the end....whatever haha.

I was under the impression that traditionally, the sales of a console are strongest in the middle of its lifetime so the PS4 being older is a point in its favor, not against it.

lol, that's not how it works. The older console is supposed to outsell the newer one. PS4 is entering its peak years. It has a larger software library, bigger price cuts, etc. No console ever sells the best in their 1st year, especially. And even with a 3D Mario and Zelda (which for the record, aren't Nintendo's biggest sellers or platform pushers) it's amazing that it is keeping up so well. It's the fastest selling console in Japan and in the US among other territories, it's going to show out in these types of charts. Has nothing to do with biases, or apples, or anything. Nobody downplayed the PS4 when it was ahead in the same chart, why now?

I don't remember seeing one single article related to the Switch where StreaK didn't write a comment trying to devaluate the console. I tried, but I can't understand why you spend so much time of your life trying to put a console down.

@Lucca: I wasn't going to reply as it should be obvious but I'll bite...soooo much of my life??? Please tell me you're joking. Of course you have to be as that must have been an over-exaggerated statement. How long does it take to comment? Jesus, I read this site more than anything and only recently even begun to comment on the site.
@Ljink96: Oh yeah, I'm well aware that consoles tend to sell more over time but I think the Wii came close with selling 25 million in 2008 (roughly 2nd year) and correct me if I'm wrong but that could be the best year and went downhill from there.
Sony consoles seem to be the most consistent over time which is what I was getting at. PS usually doesn't sell in bulk - it's like the Avatar of the film industry (accumulating huge sales over long periods). The Wii and maybe the Switch is like the Star Wars (accumulating big numbers rather quickly.)

For first year(s) it's a bit complicated and hard to follow if they are not aligned the same by launching the same months. That said, it will even out over time and while the spikes still happen during different months, the general trend will become more important by then

Why do people have a problem with This?