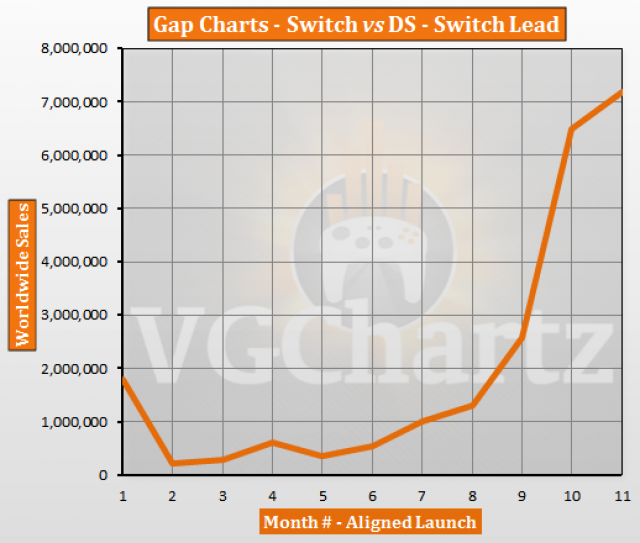 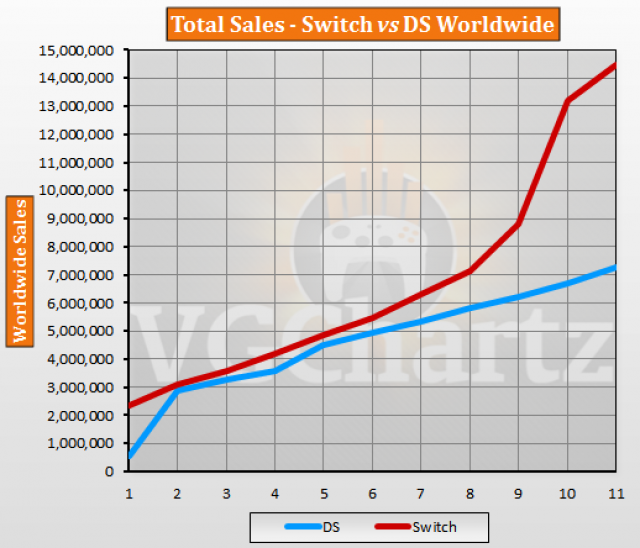 January 2018 is the 11th month that the Nintendo Switch has been available for. During the latest month the gap grew in favor of the Switch by 688,590 units when compared to the DS during the same timeframe. The Switch is currently ahead of the DS by 7.17 million units.

That ds will never catch on.

The PSP has it on the ropes.

Switch is selling twice as fast as the DS. Switch to sell more than 300m units in its lifetime.

If they can find a way to crack China they can do 400 million :)

DS hit its stride with the release of casual games (primarily Brain Age) and DS Lite in 2006. New Super Mario Bros was also a major factor in attracting attention.

Switch still has some time above the water but the big wave will be unprecedented. :p

A storm is coming...

The DS will go parabolic in the next few months.

What if Nintendo release a Switch Lite? :P

According to latest rumors, not going to happen any time soon. Mind you they said similar thing when 3DS was around for a little over a year, just to surprise everyone with the 3DS XL announcement, few months later.

You mean companies won't tell you they have an improved version of their product coming down the line, when the current model is being sold right now? Well i never!

I'm just joking around. I was just hypothetically envisioning a world where a Switch Lite had as much momentum as the DS Lite, and then we could finally see a console overtake the DS and PS2. Especially looking at how much better the Switch did with its regular model in the first year, I mean that gap is pretty crazy. Not going to happen though, 150m+ sales in this decade isn't going to be free like last time. Smartphones too OP.

Goes to show, Nintendo had to turn around their most successful console.

Spoiler alert! After 11 months, Switch is (most likely) the fastest selling console in history. The only system which, potentially could beat it in terms of shipments, is GBA.

Well, at least it will stay over DS for some years...