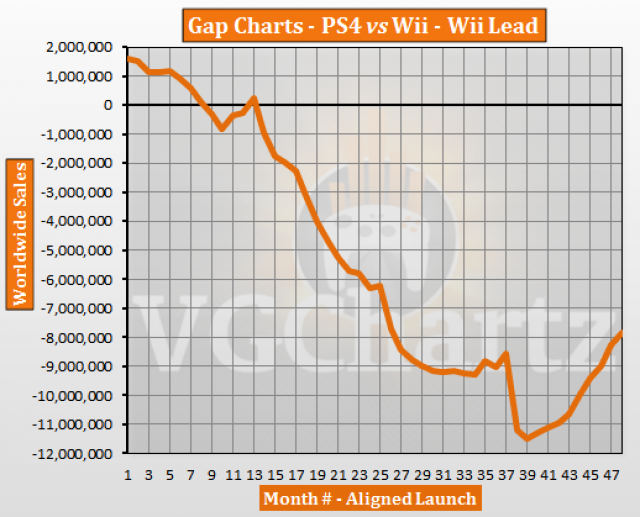 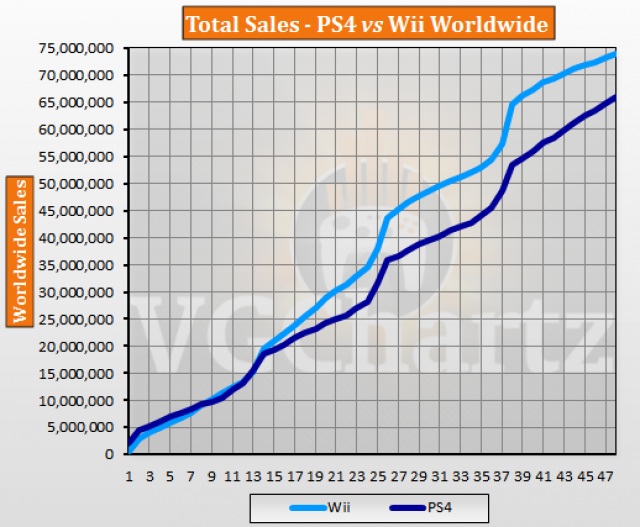 October 2017 is the 48th month that the PlayStation 4 has been available for. During the latest month the gap grew in favor of the PS4 when compared with the Wii’s 48th month on sale. The gap decreased by 444,468 units in the last month. Over the last 12 months it has decreased by 1.20 million units. The Wii currently leads by 7.83 million units.

Pretty incredible how a console can do such a great job of catching up and eventually beating the Wii.

Wii should actually regain most of the ground it lost over the year in December. Holiday sales trends have shifted so that, compared to 2010, sales tend to be much higher in November than December. 2010 Wii outsells 2016 PS4 by about 1.5 million (although I believe the calendar works out so PS4 gets an extra week, so we won't see the effect till January). Particularly since the PS4 had a sharp price drop in November, Wii should gain back a minimum of a million, and possibly all the ground they lost over the year.

At the end of the year the gap should be about 9 million. Wii sales are pretty respectable in 2011 (11.5 million). Assuming PS4 sales drop slightly to 17 millionish, the gap will shrink to about 4-5 million. Which means, that barring some kind of truly cataclysmic event, the PS4 should pass the Wii at some point in 2019.

Depending on when the PS5 is launched, and what form it takes, sales should settle somewhere between 120 and 130 million units, which is pretty good.

Actually, I'm a little off here. I completely forgot to account for the Wii's 2012 sales. Which were about 5 million. So, if PS4 sales are around 15 million next year, the PS4 would need around 12 million units in 2019. That's still fairly likely to happen, but not quite guaranteed.

Here it is. Where the Wii finally petered out. With all the new PS4 games coming out in 2018, it should end up surpassing the Wii eventually

Wow, although it’s weird this article is 4million units wrong for PS4.

It won’t. Wii saw the sharp decline because the motion control fad died in 2011, and the games lineup became almost nonexistent. Besides Skyward Sword, the Wii really didn’t get anything it’s 5th/ 6th years; PS4’s upcoming lineup, on the other hand, speaks for itself.

It isn't 4 million off. This is sales through the end of October. The 70.6 million figure Sony announced was for December 3.

While I do think it will slow down, I don't think the PS4 will drop off as sharply as the Wii did

I think in wording 'gap grew in favor of the PS4', the article would assume that the PS4 is in front, right?

Dunno why you got so many down votes, you're right. The gap didn't grow it shrank. The gap between the PS4 and the Wii is now less then it was before...