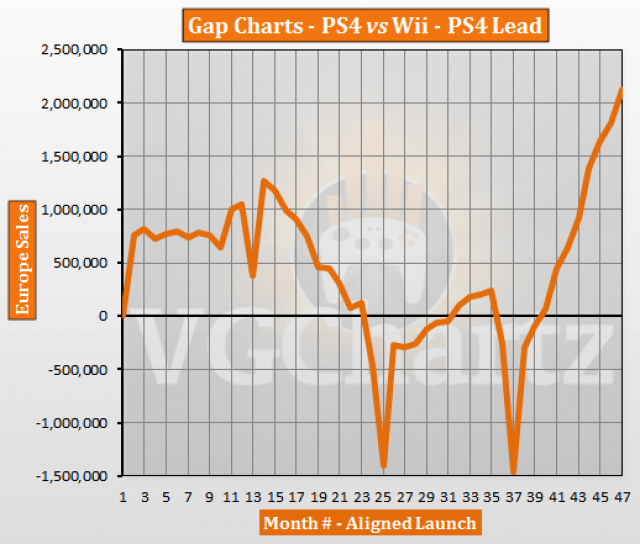 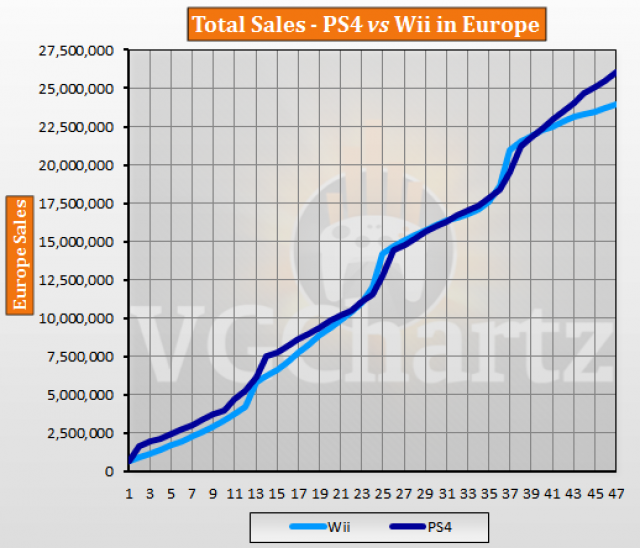 Ps4 about to leave the Wii in the dust

In fairness, the PS4 did not confront the firm competition that the Wii did.

The ps4 hasn't got completion because it destroyed it.

Since when did a blue ocean product have competition?

But not a monopoly on gaming systems.

"The ps4 hasn't got completion because it destroyed it."

"Since when did a blue ocean product have competition?"

You know what I meant. Debate the point not my phone's autocorrect messing up.

Ps4 is competing against other consoles in Europe and a stronger pc scene then last gen. Oh you conveniently forgot that.

And it's even had to compete against 2 gens of Nintendo. Wii u/3ds and their successor the switch. So much competition yet it still shines.

Nothing stops this train.

"You know what I meant. Debate the point not my phone's autocorrect messing up."

Fair enough: "The ps4 hasn't got [competition] because it destroyed it."

I assume you meant 'competition', not 'completion'.

"Ps4 is competing against other consoles in Europe"

Yes, the pariah that was (and to some degree, still is) XBox 1 and until recently, a paltry WiiU that set its second foot in the grave earlier this year.

"and a stronger pc scene then last gen. Oh you conveniently forgot that."

I didn't forget it, PC gaming has been around since the 80s. It wasn't a non-factor during the Wii era.

"And it's even had to compete against 2 gens of Nintendo. Wii u/3ds"

Both of which underperformed compared to their predecessors. WiiU sold about a tenth of the Wii and the 3ds looks to sell about about half the DS at the end of its life.

"and their successor the switch. So much competition yet it still shines.

Nothing stops this train."

Yeah, competition now that Microsoft and Nintendo are seemingly getting their shit in order.

Anything else to add, Kerotan?

The Wii vs ps4 battle here is a bit like the likes on my comments vs the dislikes on yours. The fact you returned 22 hours later to do for further comment from me just shows how triggered you are.

Get over it. Ps4 is destroying Wii in Europe. Move on.

"The Wii vs ps4 battle here is a bit like the likes on my comments vs the dislikes on yours."

"The fact you returned 22 hours later to do for further comment from me just shows how triggered you are."

You're the one resorting to ad hominem, not I.

"Get over it. Ps4 is destroying Wii in Europe. Move on."

Just waiting for you to "debate the point" or rather, points, I have raised. I'm predicting you will do no such thing.

Here's another point while you're still here: the Wii went up against a PS3 and 360 which at the end of their lives sold 80 million each. The Wii did 100 million.

The PS4 is up against an X1 that so far has sold under 35 million if vgchartz is to be believed and a WiiU that died at 12 million or so.

If you wish to pit these consoles up against handhelds like you did in a previous post, the Wii competed with the DS and PSP. The PS4 competed with 3DS and Vita. Needless to say, the DS+PSP outperformed 3DS+Vita.

Still looking like the Wii was up against fiercer competition...

You're actually losing the plot. Not sure why you are taking this so seriously. I know it annoys you seeing ps4 destroy Nintendo's best ever home console but still.

"You're actually losing the plot. Not sure why you are taking this so seriously. I know it annoys you seeing ps4 destroy Nintendo's best ever home console but still."

Thank you Kerotan. This told me all I needed to know.

You're so on edge lately buddy. I wonder why

"You're so on edge lately buddy. I wonder why "

It's glorious looking through this thread seeing the likes and dislikes.

"It's glorious looking through this thread seeing the likes and dislikes."

Not as glorious as the Sonic-Shadow-Metal Sonic battle in the latest Sonic Boom episode.

There will be a season 3 of Sonic Boom so it's not all bad news.

Just gonna sign off on another demolition job cone red by yours truly.

More like 24fps 900p if the game is demanding enough

Yup, that's about the spot where the Wii began to flatline, while the PS4 is going strong.

I really don't care about what the Wii did. No one is really going to remember that console. It's pretty much a fluke to me.
Sony, meanwhile, creates consistently well-selling consoles and the PS4 is truly well deserving of these sales. It's selling precisely because it kicks ass not because of some gimmicks or whatever.
I may be biased, but let's face it...the "PlayStation" is the greatest name in console gaming history. I don't think this brand is going to die anytime soon.

Hard to imagine the PS4 selling more than the PS2 but if it even manages to sell somewhere between 130-150 million it's still way ahead of third place.

The PS4 isn't memorable though. It took four years for it to get a decent selection of great games. I mean third parties were terrible and Sony has taken forever to get consistent first party releases. It's better than the Wii but c'mon.

One very important thing that everyone must give credit to Sony for, is the fact that Sony stood by gamers against MS evil DRM and restrictions.

I exaggerated a bit, yes. I just think that the PS4 was pretty forgettable the first three years. Consoles that focus on being next gen renditions rather than innovating through hardware always rely more on games than hardware to drive interest. And for me personally, those great games(notice I said great) weren't being consistently released until this year. The previous years there a few great games per year but it just felt like a dry spell constantly. I'm just saying that until 2017 the PS4 was forgetable to me, I had buyer's remorse, but if PS4 can continue to do this great than I'll see it in a more positive light permanently. I'm sorry if that offends you.

In a lot of ways Streak is right though. The casual gamer will forget Wii, and average and hardcore gamers will remember it in a negative light(I think this is partially what he meant by forgettable). Maybe that's an unfair destiny for the console but it seems like it's already the case.

It's not about being offended, but keeping things in check in here. Both of your posts cut the line a bit. Just try to understand that and don't repeat it.

Ok, I really had a problem with all the 8th gen consoles, but I apologize. that was communicated poorly.

But was it really that bad. I agree that the PS4 is really kicking ass since 2016. I am both a suckered for Uncharted and Ratchet and Clank. But the PS4 did get The Witcher 3, Bloodborne, Infamous Second Son, Driveclub (with support), Dragon Age inquisition and Fallout 4. So while I agree that PS4 really delivered from 2016 till at lead 2019, I don't think PS4 is library was bad till 2016, just mediocre.

I am sure Sony will deliver, because if there is one thing they learned from the PS3 bitter experience is to focus on games. Now if they forget that or get a bit lazy then they're back to square zero.

Sorry, guys. I didn't realize my comment may have been rather offensive. While I still don't really regret what I said I should have not wrote it publicly like that in order to avoid any sort of conflicts that may arise from it. I mean, it's just my opinion that the Wii just wasn't anything to rave home about. So a lot of non-gamers and old people bought the console and it managed to sell a lot of consoles and TONS of Mario-based games. Where were all those people for WiiU??? Exactly....all I'm saying is that Sony never had to abandon a console like that. They are more consistent with quality and that's just how I see it.