What do you get when you mix together Xanadu, Persona, The Legend of Heroes, and Ys? Tokyo Xanadu, an action-RPG on PS Vita. Tokyo Xanadu, from developer Nihon Falcom, launched in Japan in 2015, and has finally found its way to North American Vita owners. It turns out the game was worth the wait. It succeeds both as an action-RPG and a relationship management sim, and offers dozens of hours of dungeon crawling, character building, and story telling.

Tokyo Xanadu is set in Morimiya, a fictional suburb of Tokyo, in which everyday citizens live out their lives. Unbeknownst to most is a mysterious plane called the Eclipse that exists in parallel with the real world. When high school student Kou Tokisaka stumbles upon this dangerous parallel dimension, his life changes in dramatic ways. 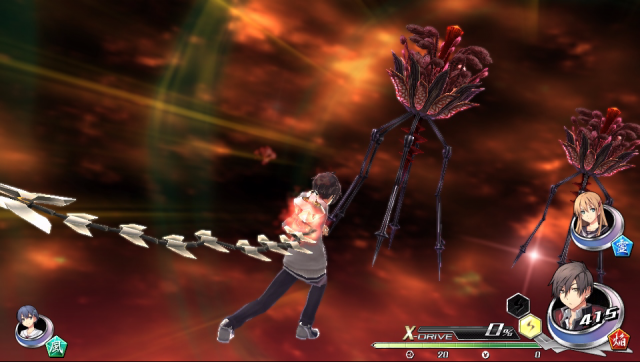 Tokyo Xanadu can be neatly divided into two main parts: dungeon crawling and "free time." In Eclipse dungeons, Kou and two other party members explore and defeat demonic entities called "Greeds." Dungeons are mostly linear, with a few treasure chests to be found off the beaten path. Completed dungeons can be replayed during free time to collect more gems and rare Eclipse elements, which are used as currency and to upgrade elemental powers, respectively.

Although dungeons are on the short and linear side, the combat opportunities inside are spectacular. Every hero has an elemental power and each Greed has an elemental weakness. Thus, players will need to swap among their three heroes on the fly to take down enemies, hit higher combos, and earn more points. Heroes have basic melee attacks, aerial attacks, charge attacks, X-Drive (two characters partner for temporary boosts), and X-Strike (super-powerful finishing moves). The only downside is a camera that doesn't always track alongside lock-on. 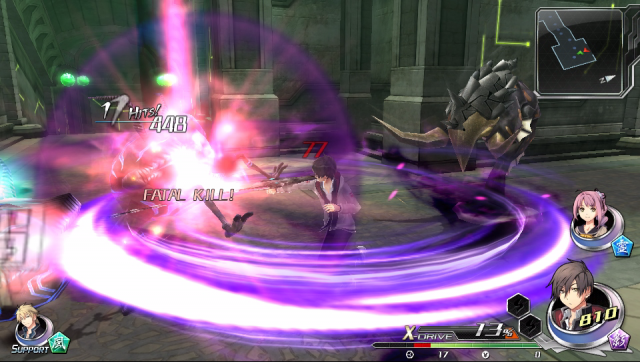 Defeating Greeds with elemental attacks, chaining together combos, and finding treasure will raise the ranks players receive upon completing a dungeon. A high rank will boost Kou's Courage and provide other benefits. Kou's Courage rating is one of three meters, which also include Wisdom and Virtue. By reading books and answering questions correctly in story events, players can enhance Kou's Wisdom. By accepting and completing side quests, they can strengthen his Virtue.

Most of this is accomplished in Tokyo Xanadu's generously-allotted free time, in which Kou can explore Morimiya, shop for items, cook food, engage with classmates and teachers, find optional Eclipse gates, and forge strong bonds of friendship with his closest associates. For fans of character and relationship building, free time is a blessing. Kou's friends and allies are interesting, quirky characters; learning about them and growing closer to them via scripted friendship episodes, similar to Persona's Social Links, is one of the best parts of the game. 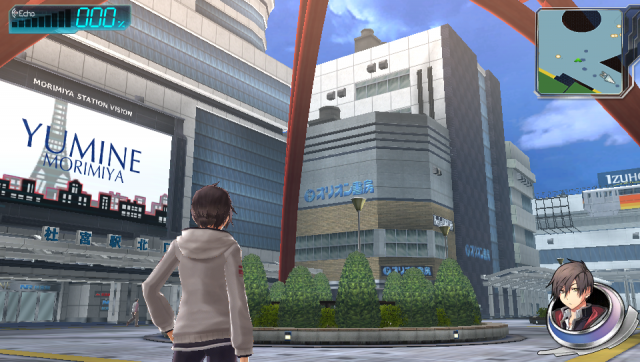 Although Tokyo Xanadu is divided into two main parts — dungeon crawling and free time — the two parts aren't equal. For the first few hours of the game, Nihon Falcom moves players slowly through its systems, characters, and options. Players won't be able to jump into dungeons at will during the game's early chapters. Once the full roster is assembled, the game picks up the pace. Before that, however, it's very much a slow burn. So, players turned off by lots of text and tutorials might find Tokyo Xanadu more frustrating than fulfilling.

Players more comfortable with mundane, earthly tasks will feel right at home, however. The slow drip of dungeons is offset by open-ended free time segments that allow players to explore Morimiya at their leisure, meeting new people, making new friends, shopping, and playing mini-games. This combination of action-RPG mechanics and life simulation elements makes Tokyo Xanadu something special. It somehow manages to fulfil the expectations of two genres at once.

This review is based on a digital copy of Tokyo Xanadu for the PSV, provided by the publisher.

One of the games i was looking forward this year, definitely picking this one up once im done with P5 and Nioh.

Looks absolutely lovely, great to see the Vita get such a game in 2017 that machine is a beast if you actually look beyond the shameful selection of game your local video game store is likely to stock for it. PSN + Vita and you're away with some of the best portable gaming you'll find.

True, and the vita is a nice system, but games like this should REALLY come to the switch after sony ditched the vita. Oh well maybe after next year when switch would be at 3 milion in japan.

Got it! Went with the basic version since the collectors edition was over $90. Ouch.

Hope you enjoy it!

Felt like this is persona from the first damn shot :-P
Considering getting this.

Hope this one is waiting for me. Can't remember if I pre-ordered or not.

Anyone else notice this article has almost the same thumbnail as Nights of Azure 2. Exact same pose, expression, and angle.

Might pick this up its going to be one of those, proberbly my last PSV game, what a good console with great games.