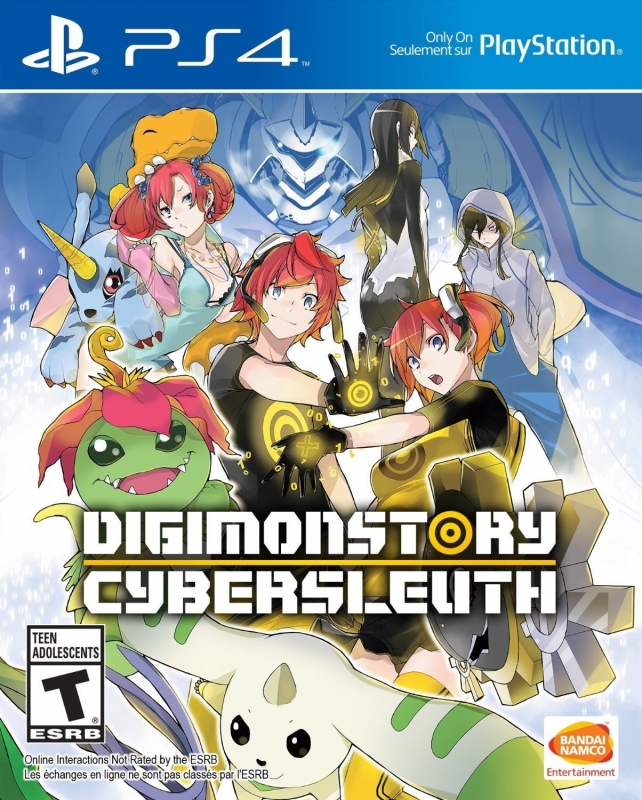 ~ Played on the Switch, but reviewing it for PS4 because it's the first game individually, whereas the Switch version is a collection. ~

The game's title isn't lying. Let's get this out of the way as early as possible: there is nothing great about Digimon Story Cyber Sleuth apart from its story. The level design is bearable at best. The presentation as a whole reeks low-budget, even if the artstyle looks nice. The RPG mechanics are nothing the genre hasn't seen one or two million times over. In most areas you'd judge a game on, Cyber Sleuth ranges from average to alright - but the story is what you came here for, and it absolutely delivers.

Of course, when you want to talk about the positive aspects of a game in a review, then point out that the story is by far the best thing about it, it becomes hard to talk anything about the game at all while avoiding spoilers. As a JRPG, this starts out fairly simple: that is, a rather long and winded opening few chapters that feel like they're getting nowhere, and a whole lot more padding until the game finally decides it's time to get into the good stuff.

One of the best things about Cyber Sleuth's story, however, is in how it slowly transforms most of that seemingly filler content into relevant information way later down the line. At one point in the game, you begin to notice how, deep down, nearly every part of this story had a real purpose and was placed where it was according to a larger plan. Beyond plot twists and revelations, though, there's also a whole lot of character development here, with two characters in particular being incredibly deep, and there will be moments where you stop to take in all that's happened. It's a long and sprawling adventure, and it feels right at home among the classic anime series.

If you're coming here looking for a Pokémon-style game, though, you're better off leaving your expectations elsewhere, as the games aren't much alike. Instead, Cyber Sleuth takes a lot of inspiration from the SMT/Persona series, with a large emphasis on the visual novel aspect, and 3v3 battles. The interesting thing about the RPG system here is how it tackles leveling up: there's a place called DigiFarm that you unlock rather early in the game and allows you to level up your Digimon while you leave the Switch in sleep mode, thus allowing you to have "overleveled" monsters at any point in the game - but from there, the stat curves and enemies are all balanced in a way so that the levels themselves aren't always the determining factor in battles. Every Digimon goes back to level 1 after evolving or devolving, but they're always becoming stronger by gaining a higher "ability" stat and expanding their movepool. Beyond that, a Digimon's HP and SP are both healed completely after leveling up, making it very easy to grind Digimon out of lower levels.

Ultimately, though, for as surprisingly engaging as the collecting can be, the game is kept together by its plot and colorful cast of characters. It does have a rather slow start, but this is one of those games that only gets better and better as it goes on, and by the end it's hard not to be heavily invested in the story and the relationships you've seen evolve over the game's rather long play time. If only the production values, level design, and battle mechanics were as good as the fantastic storytelling, this wouldn't be far from a masterpiece. Even as it is, however, Digimon Story Cyber Sleuth is a memorable ride well worth the admission price.