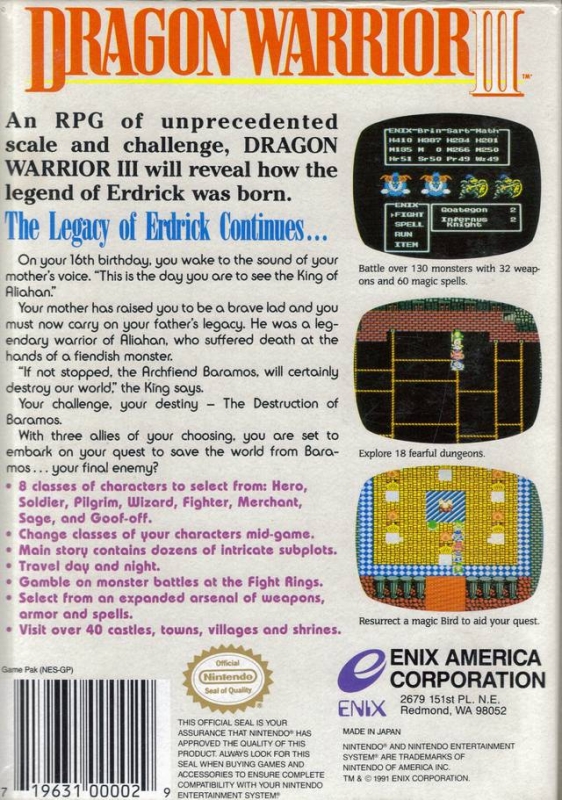 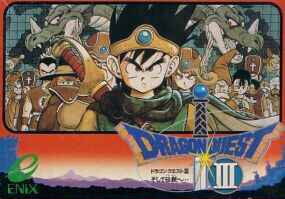 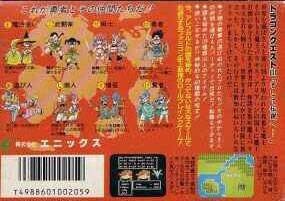 Presentation - 4.0
Gameplay - 8.0
Value - 8.0
After playing through the first three Dragon Quest games in order I think it is safe to say that third time was the charm.

Dragon Quest is a legendary series that started pretty slow. Dragon Quest 1 is incredibly simplistic and very very grindy. However, it is short. Dragon Quest II is ridiculously grindy and hard. It is also twice as long. Both of those games were painful to play through at times. Despite all that the 2nd game evolved rapidly from the first game and that trend continues with Dragon Quest III.

The game is a prequel to Dragon Quest I and II. In this game you actually get to see who Edrick/Loto was and see their story from their eyes. When you start the game you will be greeted with a cutscene! Already this game is showing how much more advanced it is from Dragon Quest II. The game starts with you getting orders from the king to stop the bad guy Baramos and form a party. Setting up a party is strange. You don't choose it at the beginning like Final Fantasy. Instead, you go to a bar pub and talk to the owner to get your party members. You can choose the class, name and gender. What's interesting is that after you create the party members they just come down from the stairs like they always existed. Pretty funny. The class system is pretty much just like in Final Fantasy 1 only you have more options and the classes actually work(Stupid Thief Class!). The classes I chose was Fighter(M), Cleric(F) and Wizard(F). This was pretty much the classic Swords and Sorcery team but its fun to try a little of everything. After all that the adventure is on!

Now the gameplay is largely the same as it was in the previous games. However, it is much bigger in scope. There are much more strategies to employ here. Each Class has its strengths and weaknesses. For instance, Wizards suck at physical attacking but can wipe up out entire enemy groups in one shot. Soldiers are great for defence and offence but have low speed. Fighters are very fast glass cannons that hit harder and faster than any other class. The gameplay is so much better than the last two games combined as you can play with a lot of strategies. What's also nice about this game is that you can dump party members! You can either take them out of your party or change their class after level 20. So if you picked a bad combination you can always change your party composition. The game still has the stupid magic has a chance to fail problem though. So Wizards start falling off near the end.

Dragon Quest III like the previous games starts off linear with strong monsters blocking your way but opens up in the 2nd half. Unlike more modern JRPGs you can actually choose which events to do and in what order by the 2nd half. What's interesting about Dragon Quest III is that you don't really go around defeating evil generals and slowly liberating towns to get to the final boss. Instead, the story tells you "Here is where the Final Boss Lives. Now get the proper items to get to him and then beat him up". This was done exactly like it was in Dragon Quest II with the Crests Collecting. In this game, you have to collect orbs to get to the Final Boss. Each orb is in a unique place. Some orbs are as easy as going to a place and grabbing it. Others require you to go into dungeons and another requires you to make a town. (By making a town I mean just let a party member who is a merchant do all the work. ) Some of the orbs have stories with plot twists. One I was really surprised was Dragon that ate Maidens.

Spoiler!
Every Maiden had a chance to be eaten and was chosen to be eaten by a Priest. Only the plot twist is that the Priest WAS the Dragon!

Another plot twist was your Merchant's new town. Your Merchant creates a new town and becomes king/queen. Only to abuse his/her power and become overthrown and sits in jail.

The game is just full of interesting stories. My favourite part of the game was getting the Sword of Gaia. You have to investigate like 3 mysteries before you can get it and the process to get it is incredibly interesting. Getting into a Ghose Ship is one of the things you have to do.

After you do all the interesting things you can finally get to Baramos. The castle that Baramos occupies is a huge troll castle. You will be running in loops until you find the right way. It does not help that wild encounters are common and tough to fight against. Even when you reach Baramos, he is pretty tough. He attacks twice and hits with really powerful spells. You definitely need to go in with a strategy or else you will get run over. If you beat Baramos you saved the land and beat the game....right?

Nope! Plot Twist! Baramos was nothing more but an underling. Zamos was the true bad guy and was hiding in another world. What is that world you might ask? Oh now for a bigger plot twist.

The world Zamos is hiding in the world from Dragon Quest 1! In a time before Dragon Quest 1. Now you know why this game is deemed a prequel. $%&$%$ is my reaction when finding this out. That is the best plot twist ever. You even go through the towns as you do in the first game. It is like playing Dragon Quest 1 all over again only fun this time! An interesting part is going to a town before it was destroyed in Dragon Quest 1. It even has the same layout! (Without the destruction of course).  You even make a rainbow bridge like the first game!

After your trip through memory lane, you finally get to the final bad guy Zamos and he is HARD. Actually, he isn't bad once you have a strategy down. Still, he hits like a row of trucks. Worst of all he can nullify all your buffs and debuffs. Your best option is to heal faster than he can hurt you. So having two healers and two fighters is an easy way to win the day. You will also want Bikill and Sap. After you beat him you win the game for real this time!

Dragon Quest III is easily the best of the original trilogy. It expands and creates new ideas for the series. The game feels so epic and it never feels like a story moment is wasted. By the time you finish the game, you will feel like you went through a lot and went through a huge journey. While Dragon Quest 1 and 2 weren't terrible they weren't good either. This game will tell you why Dragon Quest is such a beloved series.

Scores:
Presentation - 4 (Mediocre)
It is an NES game. What did you expect? The music is good but there aren't many amazing tracks.

Gameplay - 8 (Good)
The Class system is awesome. There is a lot to explore here.  This game is very replayable thanks to all the different party class combinations. However, the different classes aren't THAT different. Physical classes, for instance, is either speed or defence.

Value - 8 (Good)
The game is long so hours per dollar is not the problem here but all the grinding is. You will definitely will run into a lot of battles but that is necessary if you want to be high enough level to beat the game. The game is probably 1/3 shorter without all the massive random encounters.

Overall - 8 (Great)
The game is very fun. I never really got bored except for maybe the beginning. The game just gets more and more interesting as you progress. The class change for the 2nd half of the game keeps your gameplay style fresh. This is a game I will definitely replay one day.