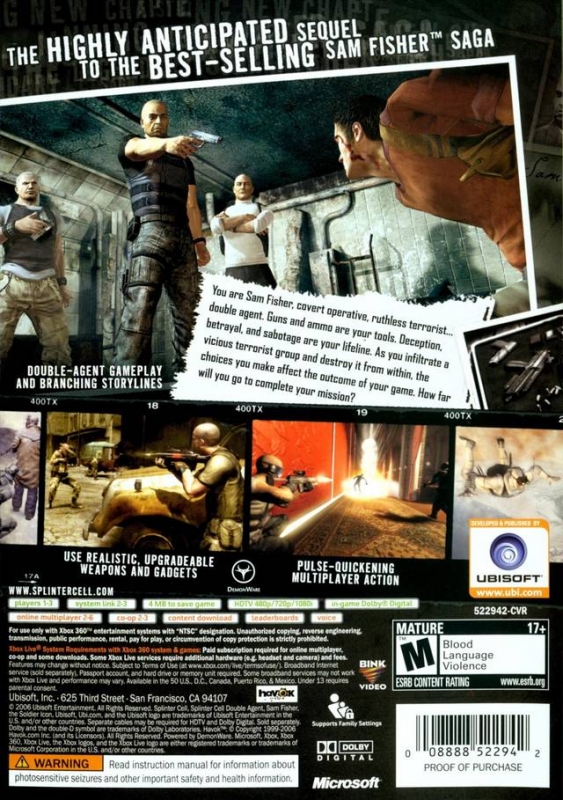 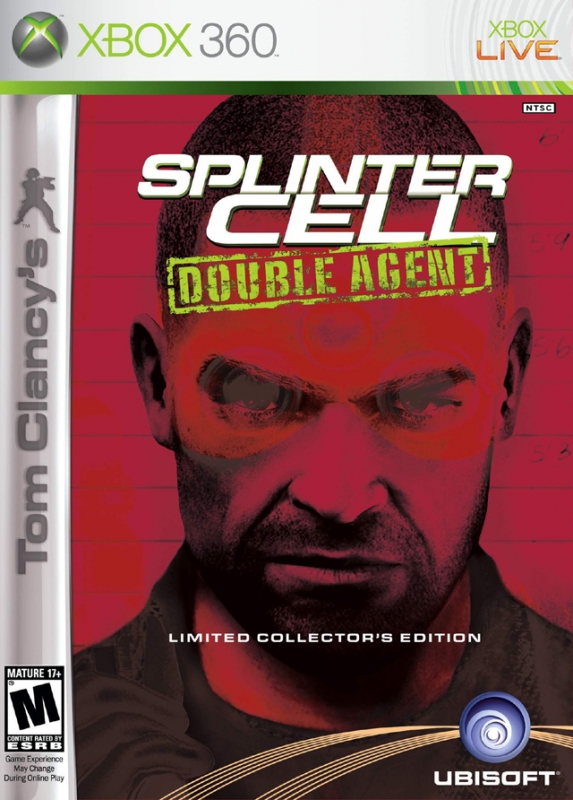 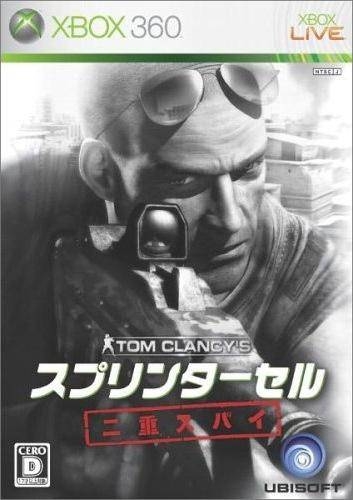 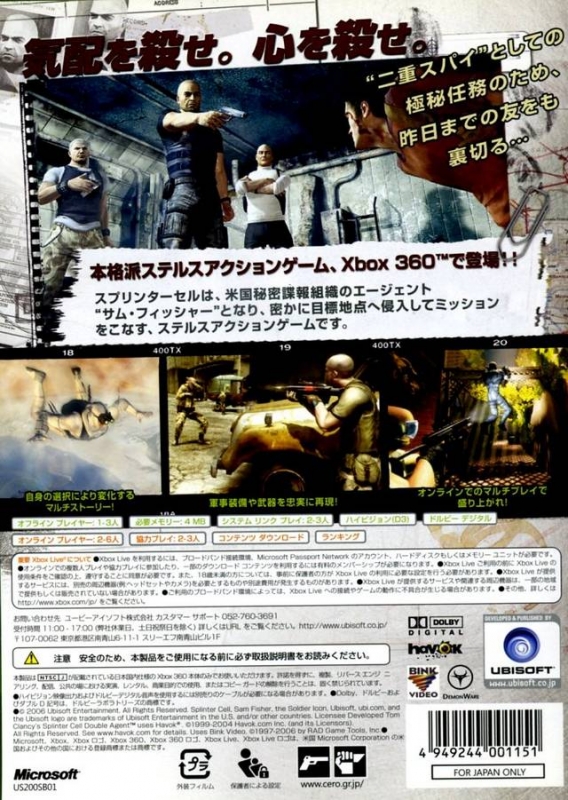 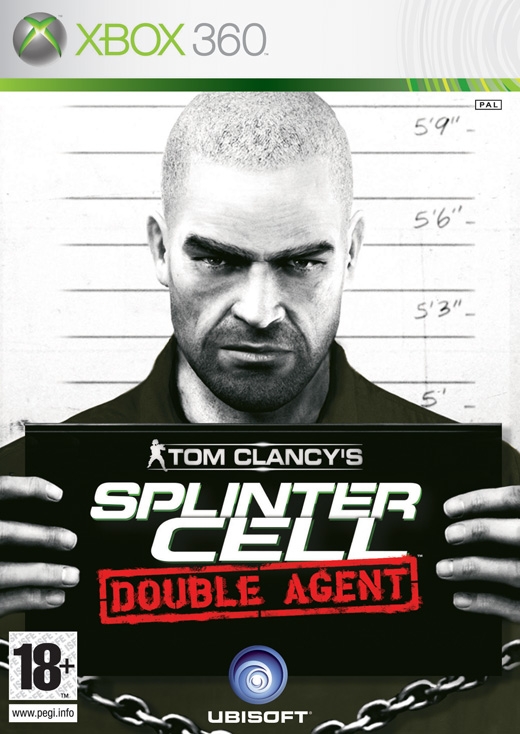 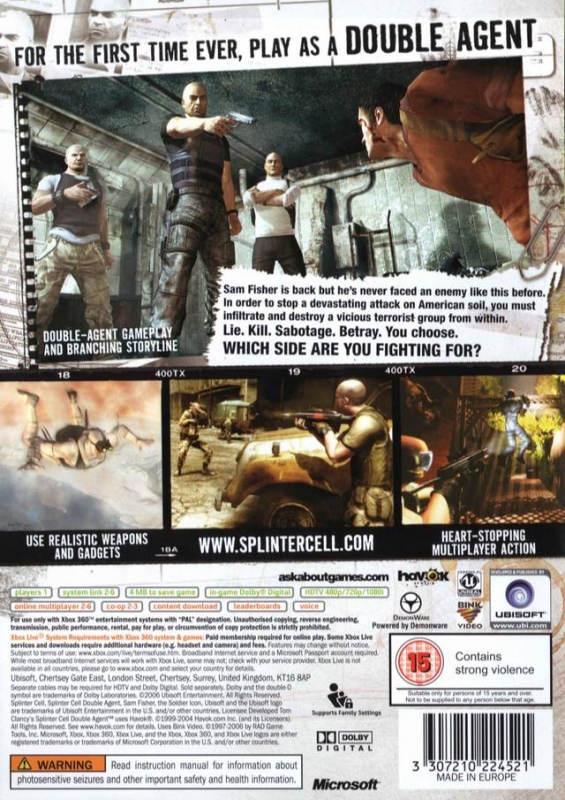 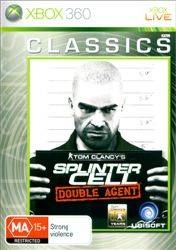 Sam's first venture into the HD era bodes quite well....

Presentation - 9.0
Gameplay - 8.0
Value - 8.0
Amist the disappointment and some unevenly-polished ideas Double Agent has, it's still a great stealth game and a solid entry into the SC series.

The U.S.A. is in peril once again in this 4th entry into the Splinter Cell series.  The only one who can put a stop to these domestic terrorists is none other than Sam Fisher.  The player has sunk into a deeper and darker plot which helps add meaning to the story, but has Sam adapted to his next venture or is he stuck in the "good 'ole days"?

The one and only Sam Fisher, Third Echelon "Splinter Cell" (codename for stealth operative), is back for another round of saving millions.  The early setting (soon to be explained) is set in Iceland in the year 2007, taking place shortly after the events of Chaos Theory.  You're set on a seemingly routine mission with a fool-hardy rookie, John Hodge, to investigate "suspicious activities" at a geothermal plant.  After stopping certain destruction, Sam's faced with horrible news as he's being extracted about the untimely demise of his daughter.  Lambert reluctantly tells Fisher that his daughter was reportedly killed by a drunk driver.

With the tradgic news Sam hears, he becomes distraught and shows that he feels he doesn't really have anything else to live for.  With such an "empty" life in his eyes, Sam agrees to venture in his most dangerous mission yet by going into deep cover.  The terrorist organization in this game is called John Brown's Army or JBA for short.  They have suspected ties with dangerous people and Sam's sent in as a deep cover operative acting strictly alone and legally has no ties to any organization whatsoever so they (NSA, CIA, etc.) can keep their hands clean.

Overall, the story in Double Agent is a solidly based one.  With this progression in a better-founded story throughout each game comes a stronger connection to your playable character: Sam Fisher.  While other games have shown tidbits of Fisher's "inner-being", Double Agent opens the floodgates and helps implore a more fluid character while showing that the saying is true: "A man's most dangerous when he has nothing to lose".  While it's not exactly well-scripted when it comes to the enemies in this game and there's plot/location inconsistencies between the HD versions and SD version of the game, the story still fairly solid and enjoyable like all the previous ones.

Another solid feat towards the presentation is the sound design and graphics.  Once again, Ubisoft has been able to show off it's technical prowess coming into the (at that time) new gen.  The gun noises, lighting, and the like all felt really top-notch and could've been argued the best in certain categories during the year of it's release.  The glaring problem to be found could technically be categorized with the gameplay as well.  Since your sound meter (and light meter) aren't HUD-based, you can find that relying on your speakers can be inconsistent at times.  Sometimes I may be going to fast to notice I'm making enough sound to alert a guard and others I just can't tell altogether since it can cut out in certain places.

The gameplay comes off the highly-praised reinvigoration Chaos Theory employed with some noticable new things that are well done.  Even though other additions can be poorly added, the overall formula's still tense and fluid.  Gone are your darkness/light and noise meter (as previously stated) and replaced with a color bar on your beeper and gun.  As you can see in the picture above, the new stealth bar on your beeper and gun shows the color of whether you're in the dark or not.  Green means you're hidden, yellow means you can be spotted, and red means that you have been spotted.  With some other subtle ideas like health and objectives not showing on your HUD all the time, your HUD is more streamlined making the stealth experience a bit less worrisome.

You'll still have your basic features known in the splinter cell games.  You have your OPSAT which gives your 3-d map, objectives (for both JBA and NSA), and footnotes.  Your lockpicking set is back as well as your basic weapons such as your knife, pistol w/ EMP switch, and auto-rifle.  The newer feature when it comes down to the basics is your new hacking tool.  Other than that, the basics are still the same from what you would know if you've played previous SC games.  The one hitch when it comes down to the "new" basics CT made is that Double Agent seems to have more linear sets overall.

What's an interesting new take on the gameplay is the new choices between the two factions you're aligned with: JBA and NSA.  All of your objectives, both main and side ones, have an impact as to how aligned you are with your two factions that's represented by 2 seperate bars.  When finishing objectives for one or the other, you're objective bar goes up and vice versa if you don't complete certain objectives.  The heavier choices come in at certain parts of the game when you're caught in-between missions, you'll be forced to choose between one side or the other and looses a bunch of rep. with the side you opposed in the process.  While this idea of a light RPG element may sound good on paper, the execution for it is poorly founded making it so simple to keep a near 100% rep. with both the JBA and NSA throughout the entire game (not counting after the major choices are played out) holding hardly any weight to this new gameplay feature.

Where the saving grace is in Splinter Cell: DA is the MP and co-op component.  While the co-op component is just MP vs. bots with varied structures instead of a co-op campaign, it's still fairly enjoyable but you wonder why certain last-gen versions did have co-op while the next-gen systems didn't.  The MP component revolves around Spies vs. Mercs like the SC series is known for BUT now it's 3v3.  The difference between the previous ones (or the SD versions of Double Agent) is there's only 1 game mode.  While that idea may come as a suprise, it's safe to say that the well-made level design bodes greatly for this idea and it helps streamline the MP mode even more.

The basic objective in the MP for Spys is two retrieve two fully downloaded files (within 20 minutes) from different colored file folders set throughout each map while the Upsilon Mercs to stop you from doing so.  Each player is set with 4 lives and the game can also end sooner if each player of one team loses all of their lives.  Spies have the similar setup to Fisher in the campaign by being in 3rd person with 3 of a certain gadget to start out with, each of which posing it's advantages over Upsilon.  Upsilon Mercs are displayed in FPS style and are equipped with an automatic rifle with launchable grenades, probes, spy sensor (for a certain range) and some melee attacks (to avoid being grabbed from behind).  These varied features between both spies and mercs makes the MP component great and so worthwhile by sticking to the formula it's been known for. 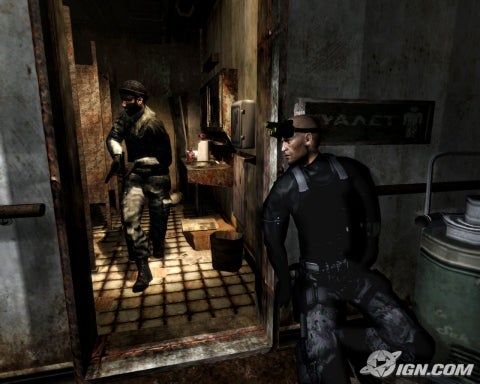 The co-op variant is basically the same but you can only be a spy.  What makes it varied is the amount of time you have, how many lives you initially get, and/or whatever restrictions are given on the file folders (can only collect 25% from each for example).  There's also Double Agent mode (knew the name would come in handy) where each of your spy "friends" are actually pitted against one another to make it a 1v1v1 challenge to see who can get the highest % from the file folders.  Although the complaint can still be made for lack of co-op in this SC game (for the next-gen systems) leaves something to be desired, this new co-op idea is still a well polished idea.

Splinter Cell: Double Agent certainly could be considered a low point in the series but with it's varied locales (although the plot's more domestic-based) that have different styles of play (infiltration of JBA HQ, daytime mission, and usual night missions) make Splinter Cell still a solid stealth game along with it's added MP value.

8.3   Splinter Cell: Double Agent doesn't exactly bode well when comparing it to what the previous games have done for the stealth genre.  Regardless of that fact, Splinter Cell: DA is still a great stealth game to it's core and shouldn't be missed by stealth fans.

Improves in certain ways upon formula