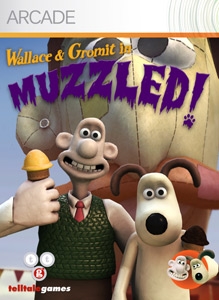 Part 3 has our duo investigating a sham of a fair, and helping some poor homeless dogs. So get ready for flying mustaches, fish flavored ice cream and maybe love?

When we last met Wallace and Gromit, they had a run in with a wild bunch of house guests as our boys tried their hand at an indoor beach resort. The third game in Telltale’s episodic series - based on the award-winning Aardman animations series - is here and ready for consumption. Shortly after the holiday season we rejoin our dynamic duo on West Wallaby street as a charity fair comes into town. This fair is run by a new character to the series, Mr. Muzzle, to raise money for a new dog kennel. You see, the town’s old dog kennel was completely destroyed in a storm, leaving the city overrun by stray dogs. As usual things are not what they seem, and it’s all up to Gromit to keep the townspeople safe, as Wallace is preoccupied with another one of his wondrous, yet astonishingly inept inventions – this time an Ice Cream Flavor machine that can supposedly imitate any flavor in the world.

As with the first two games, Muzzled is a traditional Point and click adventure game. You can move either Wallace or Gromit around using the W,A,S,D keys, the arrow keys or a dual analog controller. Certain objects of interest and characters can be interacted with by hovering over them. If some sort of interaction can be made, a square-shaped box will appear, and you can click on the item/person. A menu then appears with your options for interacting with that object, such as "talk" if you clicked on a person. If you press the “I” key your inventory screen will appear, and you can combine various items together to see if there is a result. For instance, if you select an item in the menu, then click on a person while holding that item, you will attempt to hand it to them. These mechanics are pretty basic stuff for fans of the genre, or of any Telltale Games adventure.

The game contains a few notable new characters, like the aforementioned Mr. Muzzle and my personal favorite: a stray dog named Twitch that is so terrified of everything that he follows Gromit around and chews on everything. Aside from Twitch, the other stray dogs all have their quirks as well. For example, one is obsessed with hoarding golden objects, and another burrows around like a groundhog and eats tea biscuits. Since the last game built up the back stories and mindsets for the rest of the townspeople, this game thankfully did not have to waste time with that. This means that unlike the last game, Wallace and Gromit actually appear in most of the scenes. This game is also a lot less constrained than the last game, giving you more locations to investigate. One of these new areas, the fairground, has quite a few little nuances that really show off the goofy comedy style of the game.

Another good point that puts this series back on track, is that the puzzles are quite a fair bit superior to the ones found in Part 2. While not really hard, a lot of them take more than simple trial and error or common sense. What really sets them apart is that this game has more of a sense of investigation than the last one, and simply feels more like the original animations. Whether it be rummaging through the trash for clues, or unravelling a mysterious note that explains what’s really going on, as Gromit you get a real sense of satisfaction from your skills as a sleuth.

The game clocks in at around four hours, which is pretty similar to the first two. The game is very fun while it lasts, and really captures the atmosphere of the short films and movies from Aardman Animations. The game retains the British humor, quality of voice acting and writing from the films. In fact as it stands you can view this as another standalone movie in the series more-or-less. One notable occurrence on the voice acting front is the absence of long time voice actor Peter Sallis, who usually does the voice of Wallace, but no worries are to be found as long-time backup voice actor Ben Whitehead stepped in and sounds almost exactly the same.

The Graphics in Muzzled are very good, and retain the moulded look of plasticine clay. I felt that this was a nice touch, because even though the game obviously wasn’t made in clay, the textures really add to the game. All of the new characters are rendered well, and look exactly like some of the characters that the duo would meet in their celluloid exploits. Obviously Aardman helped them out quite a bit, as nothing seems out of place, whether it be the upbeat brass music or the witty dialog.

All in all Wallace & Gromit’s Grand Adventures: Episode 3: Muzzled was a great game. It retains the quality of the original source material, and keeps the momentum going from the first two games. The game is a steal for under $9.00, but could have really been a bit longer for my taste. You can also purchase the full “season” of four games and get a bonus disc sent to you for $34.95. Let’s now hope that the fourth and final game is at least as good as this one, and that it will also be a hit.