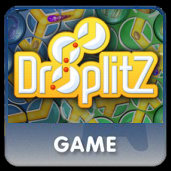 Is playing with Yellow drops in drain pipes fun? Find out in this review.

Droplitz is one of the newest puzzle games added to the XBox Live Arcade and Playstation Network. It’s an interesting challenge that takes on elements of classic games such as Pipe Mania and even a superficial resemblance to the hacking minigame from Bioshock.

The game system is theoretically very simple; in the upper half of the screen we have the exit source of a certain limited number of droplets (Droplitz) that are represented by a bar in the left side. In the lower portion of the screen we can find their destination; our mission is to connect the source with the final destination via a series of rotating pipes in order not to waste the precious liquid, since if the bar on the left ever reaches zero, you lose the game.

But a task that sounds simple at first glance isn’t that much so in practice. Just add a few more droplet sources, increase the speed, and alter the mix of available pieces, and you’ll find yourself with a big conundrum losing precious Droplitz every second as you desperately try to solve  the puzzle. Thankfully, if you can find alternative ways to properly route your Droplitz to a safe destination or execute a few special combos, you may actually be awarded with some extra Droplitz to replenish your reserve and prolong your game time.

The control scheme is simple: with the B Button, you rotate the parts clockwise, while with the A Button  you activate the Power Ups. You use the right stick to move the cursor through the screen and select the piece that you want to move. All commands are fluid and responsive, although occasionally the similarity between the various parts can lead you to confusion and inaccuracies such as accidentally rotating the wrong piece at the wrong time. This can be very frustrating when it happens.

The game sports four Modes: Classic, Zendurance Challenge, Power Up, & Infection, although only ‘Classic’ is available from the outset making it the default mode for the game. In this mode, you start out with a ready scenario and 8 more unlockable screens for a grand total of nine levels of varying speed and difficulty. Levels can only be unlocked by achieving a certain minimum score in the preceding mission.

A similar situation applies to the other Game Modes. To unlock Zendurance Challenge, you must obtain a certain score in the Classic Mode. To unlock Power Up you must achieve a minimum score on Zendurance, and so on… Probably very few players will get to unlock them all, given the degree of difficulty of the various levels and of the game in general.
Zendurance Challenge Mode is similar to Classic Mode, and is mainly differentiated by the fact that you can actually choose the beginning background, and that the difficulty level gets progressively tougher as you advance through the game. Power Up Mode, as the name implies is just like Classic but with the addition of the titular ‘power ups’ that allow you to stop time, destroy discs, etc. The fourth game mode is called infection and is undoubtedly the most difficult to master, since an infectious virus turns the pipes, making them much more difficult to rotate. As in Power Up, Infection Mode also provides you with power ups to help you in your quest to safeguard the mysterious yellow droplets.

As you may have inferred, the game suffers from a certain lack of variety, while at the same time sports a very steep difficulty curve. You really have to master the game well in order to unlock its full potential. On top of all that, probably pray that the right pieces come along for your strategies to work, otherwise you’ll end up deeply frustrated early on. However, this difficulty and random element combo do add up to an enormous satisfaction when you finally manage to complete a level. The absence of a multiplayer mode looms heavy over the game since it would have injected a lot of extra life to the concept.

The graphics in Droplitz are simple, colorful and repetitive, with the nine backgrounds progressively evolving as you progress through the game. However you’re bound to largely ignore the visuals in this title since the desperate quest for the solution to each riddle will monopolize up all your attention capacities. So graphically the game really offers very little, with the creators (Blitz Arcade) placing all their bets in favor of a straightforward and simplistic concept.

A similar approach was applied to the sound department. The game offers simplistic and relaxing tunes that evolve as the background graphics change. These include influences that range from oriental transcendental rhythms to soft techno beats, all complemented by the lulling sounds made by the droplets as they advance down the pipes. In certain high stress moments of the game you may even get the feeling the music manages to disconnect itself from the realities of your situation since it remains blissfully calm despite the fact that you’re probably already on the verge of losing the game. It’s somewhat akin to participating in a high speed police chase through a congested boulevard while listening to Vivaldi on the stereo…

The amount of gaming hours you can wrest out of Droplitz is almost infinite, since the game itself has no well-defined ending as you’re really playing to squeeze the highest possible score from an open ended challenge. Puzzle lovers will immediately fall for this game, but casual players may equally easily be intimidated by it or just wind up frustrated by its difficulty and lack of variety after only a few minutes of playtime. So if you’re a puzzle lover and are seeking a simple-themed, addictive game that will challenge you supremely, then Droplitz is sure to provide you with lots of fun. If you’re not so sure about fitting into this category, I highly recommend you to check out the Demo version first before making a purchase decision.