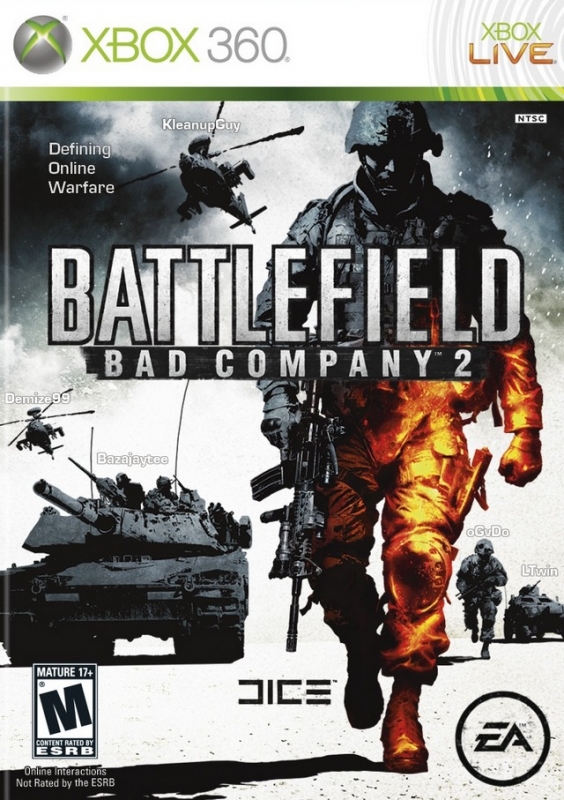 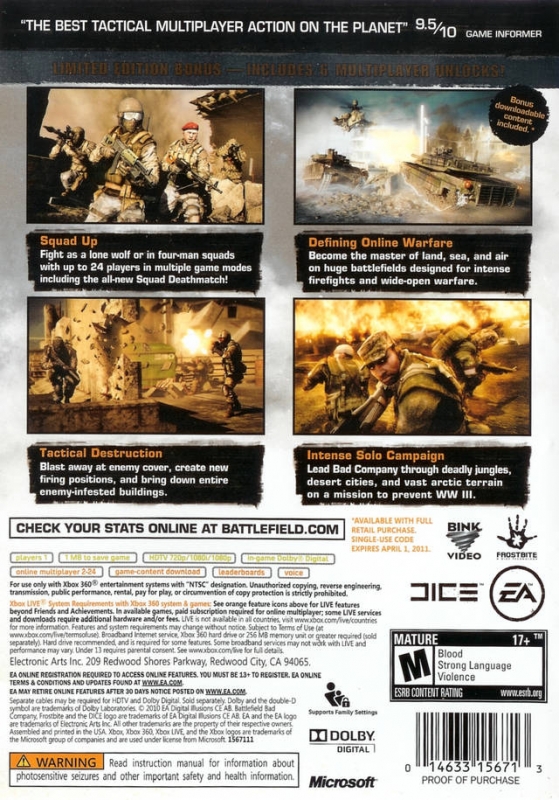 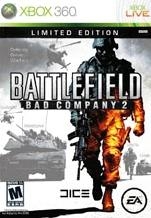 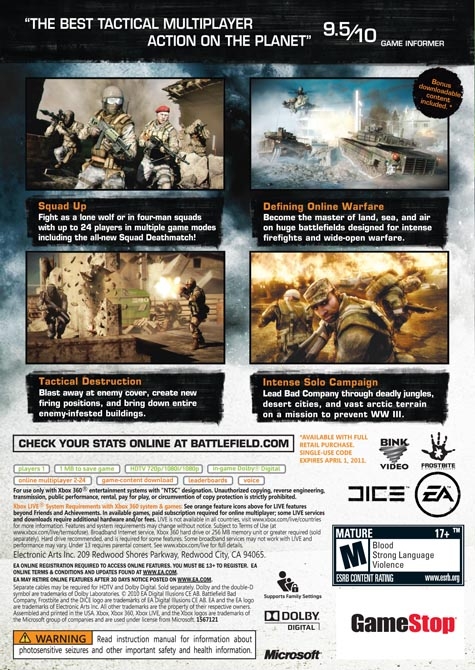 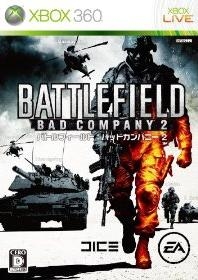 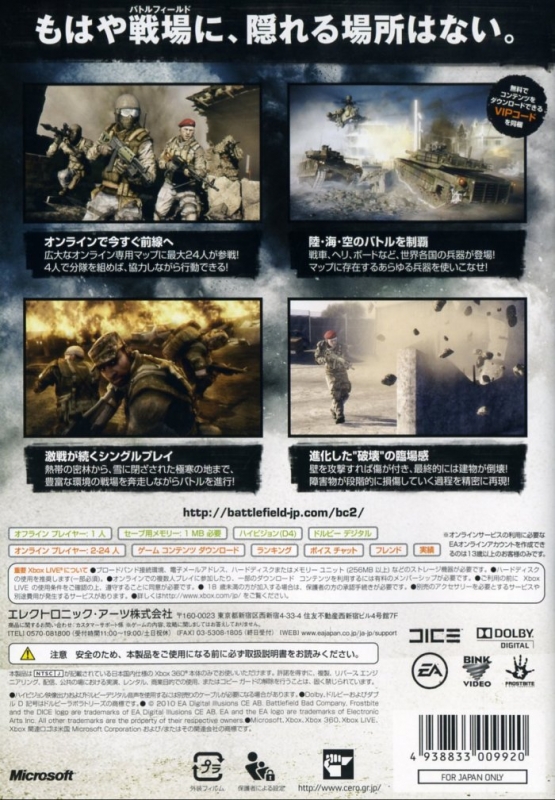 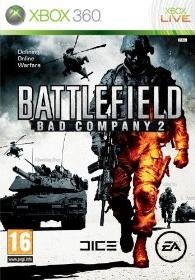 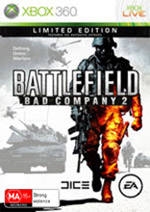 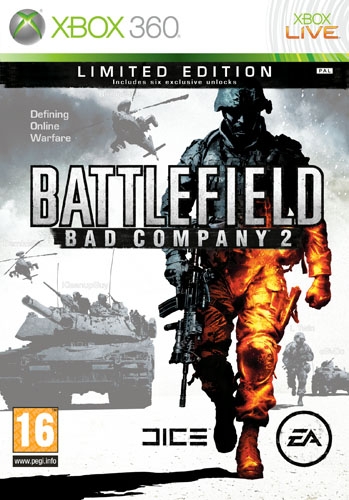 Battlefield has always been a coveted series for its multiplayer. It has always been fast, furious, and FUN. It was heradled as one of the top, until Call of Duty 4 and changed how we think about multiplayer. DICE struck back with the original Bad Company in 2008, adding a single player for the first time in the franchise. It met with good sales and above average scores, but now it's sequel is out and going. Does it surpass the original, or is it just a bang and a whimper?

STORY
The story in BC 2's single player campaign is fairly average one. Basically, the gang from Bad Company (Marlowe, Sweetwater, Sarge and Haggard) have uncovered that a superweapon, originally activated during Operation Aurora in WW II, has reappeared. The Russians are planning to use it to wipe out America's power grid, leaving them defensless, and easy to attack. It's up to said Bad Company to stop them.

As I said, it's an average plot, but it's made better by the constant banter between the gang of BC. It's not quite as funny and witty as the original, but it's still pretty good. It's not all positive though. It's slightly annoying to hear them swear more often then they normally did, and Haggard seems like a new person (I liked the old Haggard better). Luckily, their banter is what you'll hear the most, as the over-arching story isn't hugely important.

DESIGN
As I said before, the game has a single player, as well as a fully fleshed out multiplayer. The SP occurs over 13 missions. This may sound alot longer than the first, which hads only 7, but these only take a half an hour or so, compared to the hour it used to take. Roughly, the game will take about 7 hours to complete. It's quite short by today's standards, but there's multiple difficulties and various guns and satellite uplink stations to find or destroy along the way, prompting a second playthrough to find everything.

Also, unlike the original wide open levels, the ones in BC 2 are more linear. There is one instance where you're given some freedom, but I wish there were more like that mission. In the original game, if you killed someone, but then you died, the person you killed would still be dead when you respawned. This time, it's like every other shooter, where they'll be alive again if you died. This also comes with the traditional checkpoints.

In multiplayer, there are 3 modes. The first one was introduced in the original Bad Company, called Rush, though it was named Gold Rush in the first. There are two sides, the Defenders and Attackers. The Attackers try to destroy various stellite uplink stations while the Defenders try to stop them. The game ends when the Attackers destroy all the stations or they die enough times.

The second mode is Conquest, which is in every Battlefield game. There are 3 to 4 flags scattered around the map. Your team must try to control as many as possible, killing people along the way. The game ends when one side dies too many times.

The third mode is called Squad Deathmatch, the first new mode. There are four teams of four people each. Just keep killing members of the other squads, until your squad kills 50 people.

There is a fourth mode, but it's only available to people who preordered the game. Everyone else has to wait until a month after the game's release. It's called Squad Rush. It's basically a mini version of the Rush mode, with two teams of four, with one as the Attacker and the other as the Defender.

As for the reat of the multiplayer, the game has a rank system get enough points and you rank up. You unlock various wepaons, gadgets or perks as you level up. There are also 4 classes you can choose from. The Assault is for run n' gun people, Engineers heal vehicles, and blow them up, Recons are the snipers, and medics heal people. The more you kill people using a specific class, the more weapons you can unlock for that class. You can do the same for getting points in vehicles.

Basically, it's a well rounded package that will keep you busy with it for days.

GAMEPLAY
The gameplay is basically like every other shooter, the tried and true formula. AIm down your sights, shoot, jump, knife, crouch, etc. It is all instantly familiar, though it is slightly different than the first game, which might mess up a few people.

There are some other things that have changed since the first game. Gone is the normal health system, with the injection needles to boost. In is the regenrating health, which is basically every game nowadays. Personally, I liked the original's health system better.

There are some good changes though. Grenades aren't just a subweapon that only came with a few guns like in the first game, you always have them. Also, you have permanent access to the binocular airstrike thing. Finally, throughout the campaign, there are supply crates where you can switch your guns to any one you have previously collected.

All in all, the core gamplay hasn't chnaged much, which isn't a bad thing, and most of the changes do good for the rest of the game.

PRESENTATION
Bad Company 2 is a gorgeous looking game. There's great detail everywhere, and everything has a very realistic look to it. The character models look great and animate well, as do the guns.

The voice acting is good too, but they weren't given any justice with some of the stupid lines, though most are good. It's also great to hear how guns sound different depending on their surrounding. For example, if you shoot a gun in a small room, there's a great echo that comes back at you.

Overall, it's just a great looking and sounding game.


Bad Comapny 2 is a great game. It has a fun, but brief, campaign and an addicting multiplayer. It plays great, looks great and sounds great. But I feel the game has lost the charm it once has. It doesn't feel like a sequel to the original. If it weren't for the returning characters, you probably wouldn't guess it was Bad Company. This probably has to do with it trying to compete with the likes of Modern Warfare 2, but it has just become to much like that, which disappointments. It's an awesome game, don't get me wrong, but it has just lost what made it different than all the other shooters.