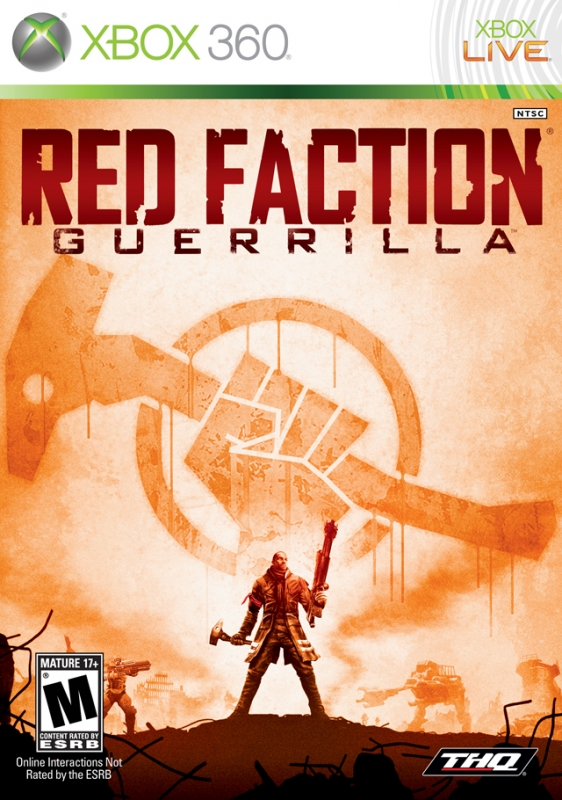 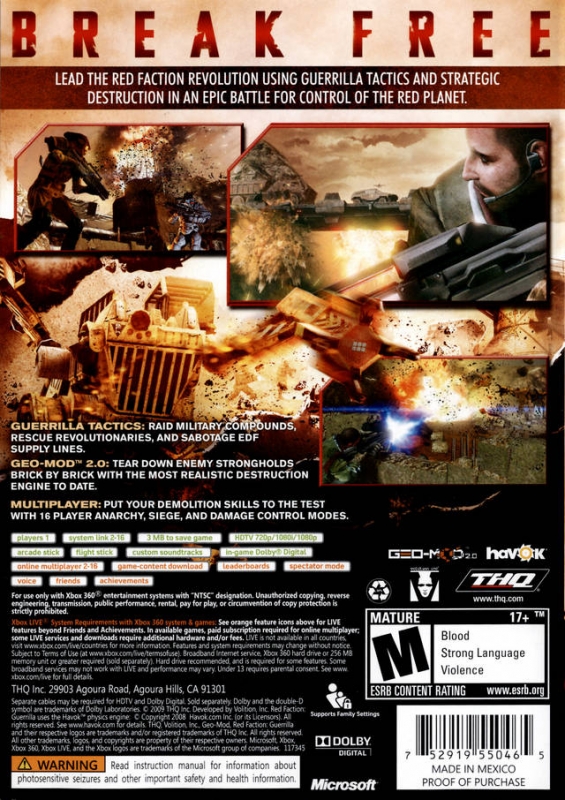 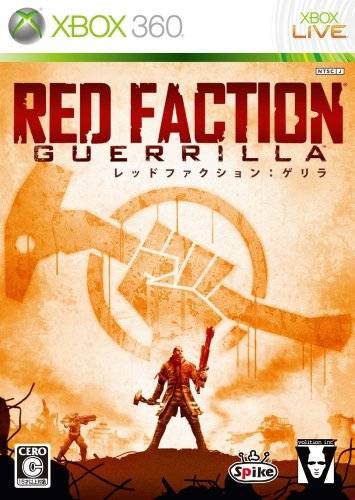 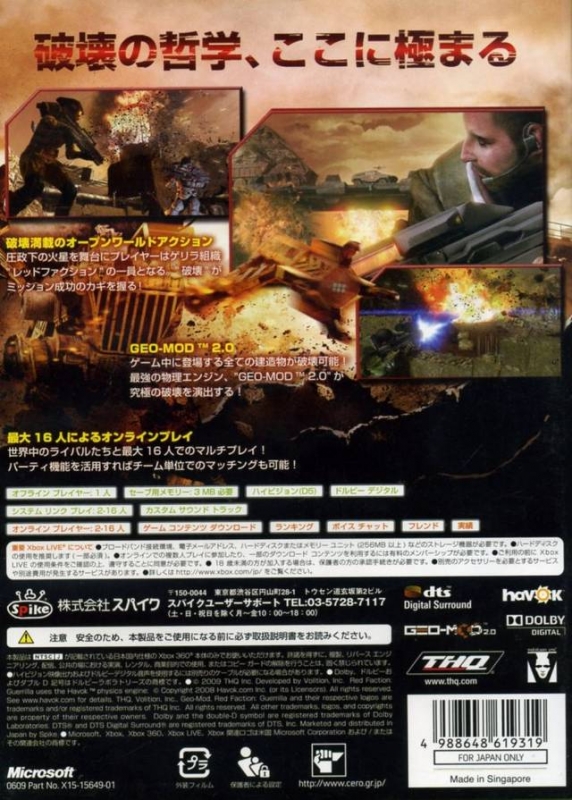 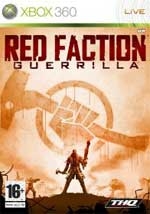 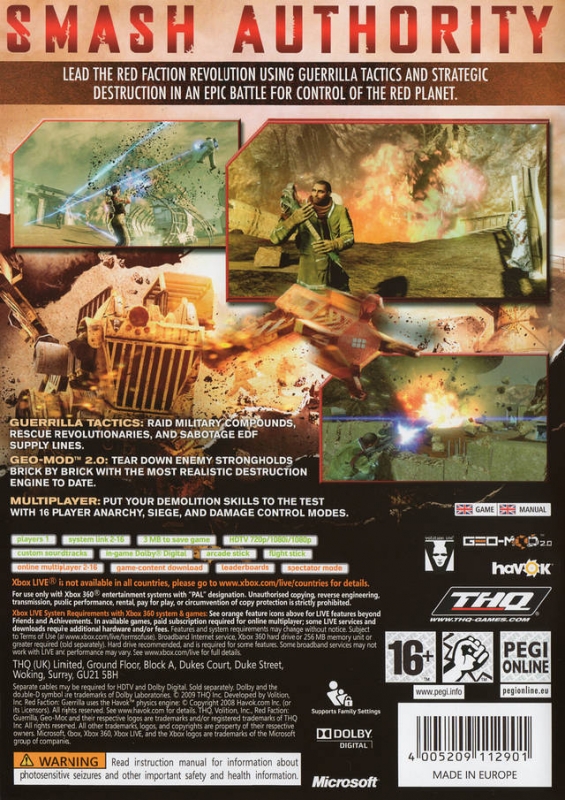 Presentation - 8.0
Gameplay - 8.6
Value - 7.6
A bombastic game that is a blast to play, but one that has an underwhelming multiplayer and drab environments.

Who doesn't like to destroy things? Just wathing something smash into tiny pices just makes you excited. If you wish you could do such athing withou any consequences, this is the game for you. Almost everything you wthink would be desturcuctible is. But is all this desturction goodness just there to mask other problems.

STORY
You play as Alec Mason. He is a miner sent from Earth to Mars. When he gets there, he sees how the planet is being controlled by the Earth Defence Force (EDF). He's met by his brother Dan, who is part of a group called the Red Faction, who want to rid the planet of the EDF. A short while later, though, Dan is murdered by the EDF. Alec unwillingly joins the Red Faction because of this. You are tasked to liberate six sectors of the EDF before you can finsih them off once and for all.

I'd say the story isn't too bad. There are a few twists later on but it never becomes that interesting. It's really just an incentive to destroy things and kill EDF soldiers, which is good enough for me.

DESIGN
There are 3 modes in Guerilla: the single player, multiplayer and the destory-everything-in-site mode called Wrecking Crew. First, the single player. You start off by selcting one of four difficulties. Pretty much all of them are hard except for the easiest, so I'd recommend that for your first go. There isn't much incentive to try the harder difficulties anyways, as there are no achievements pertaining to the difficulty. There are 20 story missions and 104 side missions for you to complete, though you obviously don't have to do every side mission. Your basic goal is to lower the EDF control, raise the population's morale and complete a few story missions in each sector. Once done, a final story missions for the sector will appear, which will completely liberate it. After that, you can move on to the next sector. The story missions vary on what you are supposed to do, but the side missions only come in 9 flavours, ranging from take this vehicle from point A to point B to destroy this structure using only these weapons. They kind of get reptitive, but they're different in enough ways to not be teeth-grinding. Overall, the single player is a fun journey. The time it takes to complete depends on how many side missions you want to complete. Rushing thorugh the game will take around 8 hours.

Now for multiplayer. I didn't find it that engrossing, but that might be different for some other people. Like every game nowadays, you gain experience, level up and gain new insignias. There is alot of unlocks though, which make syou feel like your'e constantly accomplishing something. There isn't many modes, which is slightly disappointing. There's only really two that stand out. The first is called Demolition, where one person on each team is set as the Destroyer. They must destroy as much as they can to rank up points. If they die, another Destroyer is named. The other is Siege, where one team must protect various buildings while the other team tries to detsory them. Once the time is up, or the buildings are destroyed, the roles switch. Other than that, there's just deathmatch, team deathmatch, capture the flag and king of the hill.

Finally, there's Wrecking Crew. There are various modes in which you must detsory certaain targets ins slightly different ways. One scatters explosive barrels around the map that you must shoot, while another just makes you destory them in any way you want. This mode is menat as an offline multiplayer mode, though it can be played by yourself. There are various rounds and whoever gets the most points wins. It's a fun diversion, and is good for you desturction freaks.

So, the single player and Wrecking Crew are quite fun but the multiplayer feels like an afterthought. It can be fun sometimes though.

GAMEPLAY
Basically you are allowed to carry three weapons and a sledgehammer. The weapons range from simple shotguns and machine guns to a rifle that basically melts anything and a ginormous rocket launcher. The shooting mechanics feels tight, which is always a good thing. But you'll probably be using your sledgehammer most of the time. It's the most fun to destroy buildings with and it's always a good feeling to smash a soldier with it. There's a horisontal and vertical swing, which helps sometimes when destroying buildings.

Besides shooting and swinging, there is a bunch of driving. There are many vehicles to drive, varying in strength and speed. Most of the time the driving is smooth, but I've had times where the vehicles refuses to turn, or goes backwards while I'm holding the acceleration button. It doesn't happen alot, but it can still be kind of irritating. I do wish you could fly planes though, as the open world is pretty large and it isn't very fun to drive long distances.

One touch I do like is that you can choose the point you want to drive to and the game will give you a nice trail to drive along, cutting a huge amount of frustration that would result in trying to figure out where you are supposed to go.

Overall, the gameplay is tight and smooth, though there are some driving issues and the lack of flying is kind of disappointing.

PRESENTATION
The first thing you will notice is how AMAZING the destruction looks. It just looks so damn realistic. You will constantly be awed. There are a few times, though, where a building will be standing on one flimsy little steel bar, but it's expected that there would will be flaws in even the most amazing engines.

Other than that, the game isn't that amazing looking. Most of the time, you'll be looking at rocks, rocks and more rocks. Everything just looks so similar. They were nice enough to change how each sector looks though, which makes easier to identify where you are. But can you really blame them? How are you supposed to make Mars look varied. The characters aren't particularly detailed either. I've also had it where the frame rate drops when there's alot of action going on, but this doesn't happen too many times.

As for sound, the voice acting is pretty good, but there's isn't much music, which makes it all the more boring to drive around. There is also various voice samples that are repeated too many times.

So, while the destrucution looks absolutely amazing, the rest of the game's presentation doesn't stand up too well.


Overall, I had a blast with the game. Destroying things was always fun, and I had fun throughout the campaign. Unfortunately, the multiplayer just wasn't that great and the environment looked pretty bland. But if you like destruction, as I do, I would easily recommend this game.

From an entertainment standpoint, I'd give this game an easy 9.2/10. But from a critical standpoint, I can only give it an 8.2/10.