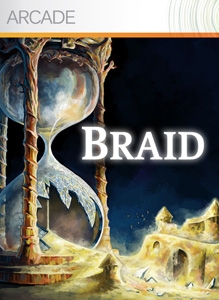 Perhaps we should reverse time and review this a year ago.....

If there has been one great improvement everyone can agree upon about this generation of gaming over the last, it is probably the prevalence of PSN, XBL, and WW, which gives artistic little games a place to thrive. These online distribution systems allow for lesser known developers to try things outside of the box that can really pay off for us gamers. Braid is one of those games.

Braid is often described as a puzzle/platformer, but while you spend a lot of your time jumping it is much more a puzzle game than a platforming title. You play as Tim who is on a quest to save a princess from some unexplained horror. The story is told in little snippets through books at the beginning of each world, but these are written to be somewhat cryptic and you will not really get a sense of the story until the end. This setup can leave you with little obvious story related motivation to continue through the middle of the game, as the puzzles get increasingly harsher and you still have no clue what is going on with the story. It is all worth it in the end though, since the game is capped off with one of the best endings I have had the pleasure to experience, using the gameplay and story near perfectly. I just wish the bulk of the game’s story had been as compelling as the end, since that would have made for a truly amazing game.

Gameplay in Braid is based completely around time manipulation and is set up similar to many platformers. You start out in a hub world from which you slowly gain access to five different levels with different stages. Each stage has puzzle pieces which you have to obtain using the time powers that that specific level gives you. These powers can range from only having your omnipresent ability to go backwards in time with the press of a button, to the ability to create clones of yourself or slow down time in a specific area. By far the most mind bending level is one in which time moves backwards or forwards depending on whether your character is moving to the left or to the right. These stages so warped my mind that when I watched TV directly after playing them I kept expecting time to reverse itself whenever someone on the screen moved to the left.

Giving the player a new power to master in each of the five stages is a great way to keep the gameplay fresh and interesting. My only real qualm with the puzzles is that you are expected to figure out how to use the time manipulation through trying the puzzles, which works well for the most part, but one puzzle’s solution in particular is so abstract that solving it left me annoyed that the developer thought that was a fair puzzle to throw at people.

The main reason that I describe Braid as a puzzle game instead of a platformer is that it lacks challenging platforming sections and you cannot die. If you are hit by an enemy you will die momentarily, but then you are prompted by the game to reverse time and continue playing. While this lack of punishment in death would be a huge detriment to a game that depended on its platforming to make the game difficult (I’m looking at you Prince of Persia), this works surprisingly well for a puzzle game because the focus is different. Where the challenge of a platforming title is supposed to arise from the fear of death, puzzle games are all about slowly thinking out your next move. Since you cannot die, every enemy changes from a threat to simply an impediment to your solving the puzzle, and this works extremely well.

While getting through to the end of each stage is somewhat of an accomplishment, the real goal of the game is to collect all of the puzzle pieces in each level and put them together to make five different complete puzzles. Put the pieces together and you are one step closer to entering the sixth and final stage. The last level has a time trick all of its own, but is unfortunately short since there are no more puzzle pieces to collect and your only goal is to make it to the end of each stage.

Visually, Braid has a nice oil painting style to it that can be quite pleasing to look at and I never came across any technical problems, but it never gave me any awe inspiring moments. The music fits well with the game, and the effects when you go forward and backwards through time help sell the mood. Voice acting is non-existent, but this is more of a footnote to inform people, rather than something I think the game should be docked for not having. As I mentioned before, the story is minimal, although Braid still manages to get a few laughs out of the dinosaur at the end of each level who informs you that the princess is actually in another castle.

Sadly Braid has the same weakness that many artistic, fun little downloadable games have: it is $15/1,200 MS Points, but only takes three hours to play through to completion. Once you have completed the main story of the game there really isn’t much left to do, other than collecting extremely difficult to obtain stars with a minimal end pay off or playing through the game again and trying for a speed run to earn the last trophy/achievement.

Games like Braid are the reason that I love the online distribution capabilities of all three consoles and the PC. They give a developer, like Jonathan Blow, a chance to make a game that is outside of the box and still really successful. Braid has some fantastic puzzle gaming, a unique aesthetic style and one of the best endings in gaming. These great qualities are slightly countered by a short playthrough time and lack of awe-inspiring visual moments, but there is no question that Braid is still a great game. If you are a puzzle fan you owe it to yourself to pick this game up, just don’t expect the fun to last for too long.